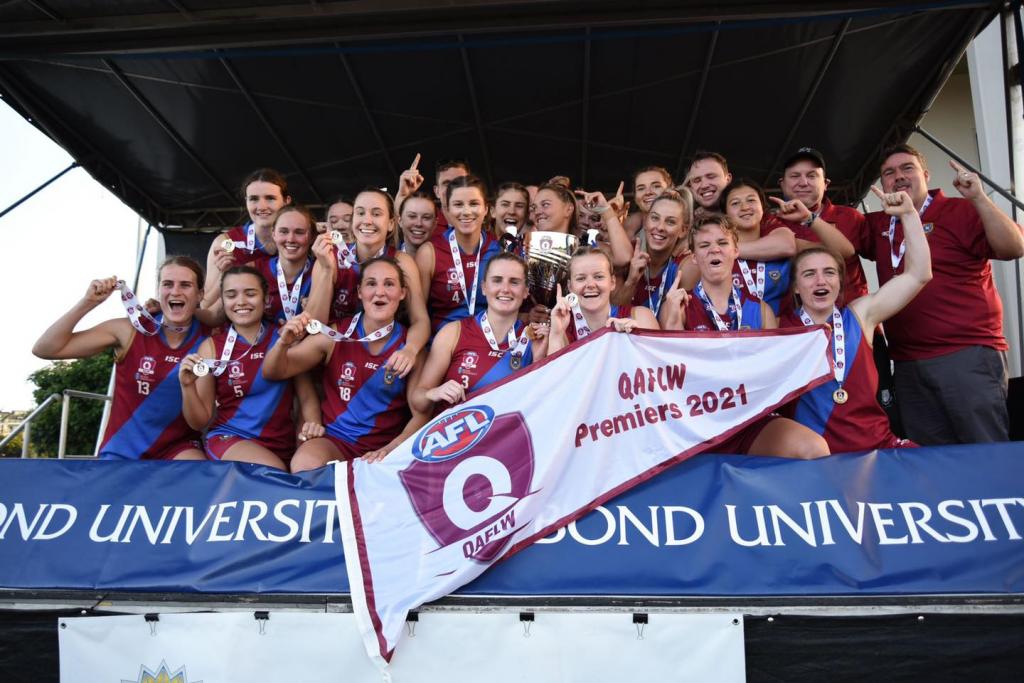 The University of Queensland produced a stunning second half of footy to smash Bond University by 40 points in the 2021 QAFL Women’s Grand Final. The Red Lions were unstoppable after half time as a massive 53-point turnaround saw them defeat the Bull Sharks 15.5 (95) to 8.7 (55). Dakota Davidson dominated the game with a best on ground performance leading her side to a historic first ever premiership for the women’s team and backing up her 2021 AFL Women’s title with a state league one.

The win wasn’t without any difficulty after Bond got off to the better start. The Bull Sharks had a lot of the play in their forward half during the first quarter, with AFLW talent Taylor Smith offering a strong target heading inside 50. Smith kicked the first goal of the game and had a couple of chances to make it multiple majors in the first term. An important goal to Luka Yoshida-Martin put a halt to Bond’s first quarter dominance, before Ellie Hampson kicked two late goals meaning the Bull Sharks led at quarter time with a 16-point advantage.

The Red Lions pegged back the lead after Maddie Crowley-Long and Davidson kicked consecutive goals to get within four points during the second quarter but, on the back of Lucy Single dominating in the midfield-attacking the footy, breaking tackles, and winning plenty of disposals – and Kalinda Howarth kicking a couple of goals in the quarter – the Bull Sharks maintained their advantage at the main break, leading by 13 points.

Then the avalanche started. The Red Lions were ruthless kicking six goals to one in the third quarter as they hunted down Bond’s lead and took control of the game. It all started when Breanna Koenen took a nice intercept mark and converted in front of goal. A goal to Marnie Mcgorm got the Lions within a point before Grace Brennan gave University of Queensland the lead for the first time. It didn’t stop as Mcgorm and Davidson kicked their seconds of the game either side of a Greta Bodey goal. Davidson had turned it on down forward, attacking the footy ferociously and using her strength to outmuscle opponents. In the centre, Koenen and Yoshida-Martin got busy as the Red Lions were causing havoc.

Unfortunately, an earlier injury to Krystal Scott looked to be hurting Bond’s defensive structures as the goals kept on coming. There was no stopping the Red Lions as they added another five goals in the final term, leaving the Bond Bull Sharks shell-shocked, only kicking two majors for the entire second half. Howarth added her third goal in the last, but it was only a consolation major as Davidson kicked two more goals, including the final goal of the match.

Davidson capped off her four-goal effort with 18 disposals, the second highest on the ground, only behind Single (20 disposals) who was excellent all day for Bond. The celebrations were well and truly underway for the Red Lions as the final siren rang out over Leyshon Park, the club’s first success since the 1984 men’s side were victorious.