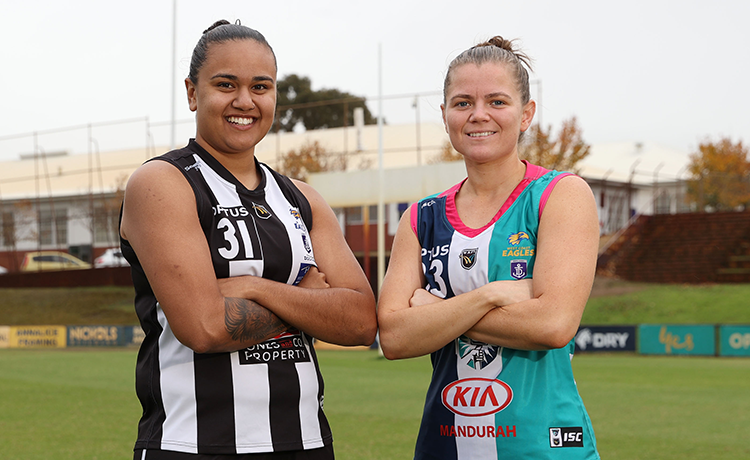 SECOND time’s a charm in the WAFL Women’s, as Peel Thunder and Swan Districts are finally set to square off in this year’s Grand Final. Having been rescheduled from last week due to West Australia’s lockdown, Saturday afternoon’s decider will see crowds allowed in attendance to watch this season’s top two ranked sides battle it out for premiership glory.

We run you through all the key players, figures, and fixtures in our Grand Final preview.

Saturday’s clash marks the fifth time Peel and Swans have met in season 2021, with the ledger squared at 2-2. Swan Districts, the minor premiers, got the wood over the reigning premiers early with wins in Rounds 3 and 11, before the Thunder proved they could peak at the right team with redemptive victories in Round 14 and the first week of finals.

The latter result saw Peel advance straight to the big dance, with the club seeking to win consecutive premierships from second place. Meanwhile, Swans made good on their second chance, qualifying for the season’s final game after a 38-point win over Subiaco.

Looking at either sides’ last five outings, and the only blemish on Swans’ latest efforts have been made by their weekend opponents. In fact, the Black Ducks’ sole loss of the regular season came at the hands of Peel. The Thunder, also 3-2 over their last five games, have suffered those losses to fellow finalists Subiaco and Claremont. While the defending champions look ominous at their best, Leigh Matthews‘ Predator-inspired adage goes “if it bleeds, we can kill it” – and Swan Districts will likely have that in mind.

Both sides have also proven they can score big this year. Only confirming just how evenly matched they are, both finished the season with 716 points-for – almost 200 points more than the next best team. Needless to say, whichever set of forwards can better capitalise on their opportunities will have a massive say on this contest, though neither side can be counted out given the class afield and quick-scoring potential.

As has been the case all year, these two teams will be littered with players on both ends of the experience spectrum. AFLW-listed stars and Under 19 state squad members headline some of the high-end talent afield, making for intriguing team dynamics and versatile structures.

Peel boasts an all-Fremantle AFLW centreline, with star midfielder Sabreena Duffy at the heart of the side while Sarah Verrier and Katie Jayne Grieve line up on either wing. The extended Swans squad also features a trio of Dockers, namely Stephanie Cain (half-forward), Bianca Webb (rover), and Mikayla Hyde (wing). Brianna Hyde has been named on the opposite wing, as one of the many promising Under 19 state representatives to watch.

It is hard to look past Peel powerhouse Ella Roberts as the main event in that department, given she is already a proven finals match-winner at WAFLW level. The 16-year-old was also named her state’s Most Valuable Player (MVP) during this year’s national carnival, and will spearhead her side’s attack alongside Kate Bartlett. The speedy Aisha Wright has been named alongside Roberts at half-forward, while AFLW Draft Combine invitee Beth Schilling features on the interchange with Jaide Britton.

Bella Mann and Emily Gunton (both emergencies) are other youngsters to have rolled through the Thunder’s line-up, while All Australian midfielder Courtney Rowley is set to miss through injury. Tajah Griffiths, Jade Briggs, Naomi Wilson are Peel’s remaining Under 19 squad members to miss.

The Swans squad is littered with young talent, and bookended by Sarah Lakay (full forward) and Isabella Edgley (full back). Melisha Hardy and Nyra Anderson join Edgley in defence, while Dana East takes her spot in the centre in a tricky match-up with Duffy. The Under 19 crop is rounded out by Emma Nanut, Tara Stribley, and Naomi Barker, who will all hope to make the cut from a nine-player extended bench.

A BIG day on the footy calendar ?
All the details of the 2021 @Optus WAFLW Grand Final! pic.twitter.com/MAxRvqKIhj