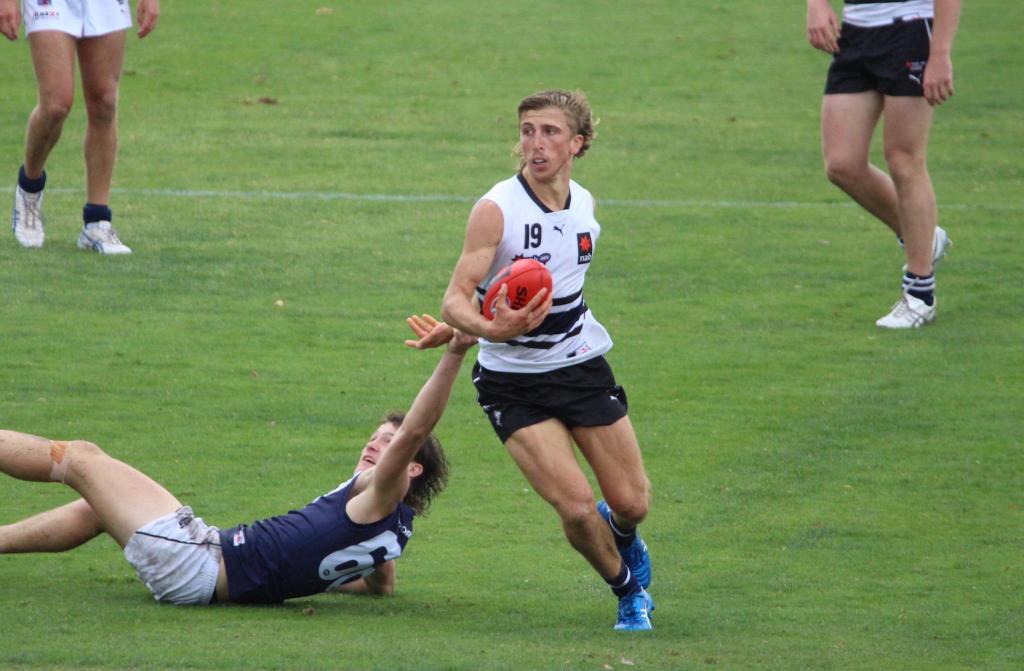 A BUNCH of the nation’s most promising Under 19 prospects continues to filter through the Victorian Football League (VFL), including a raft of top-ups and academy talents. Many have already made their state league debuts, with more to come and a handful sighted this past weekend. We take a look at how the prominent 19th-year players performed as they hit the senior football grade.

Bendigo Pioneers pair Sam Conforti and Jack Hickman returned the Essendon VFL setup, as the Bombers found the going tough against a rampant Geelong side. The nippy small midfielders both got their hands on the ball, with Conforti ticking up to 18 disposals in his sixth outing to bring his season average up to 17.3. Hickman found it 12 times, making for a solid fourth outing at the level.

Sydney was another reserves side to send out plenty of top-ups, with eight NAB Leaguers from six separate regions taking the field in their loss to Frankston. West Australian Logan Young was the pick of the bunch with 21 disposals, five marks and a goal, while Calder Cannons top-ager Sam Clohesy (18 disposals, six marks, five tackles) was also productive on debut. Clohesy was recently signed by Coburg, but got clearance to fill in for this clash.

Geelong Falcons products Sam Witherden, Gennaro Bove, and Kyle Skene each got a run in their second outings, while fellow country talents Cobi Maxted (Bendigo) and Fraser Marris (Greater Western Victoria) were also called up. Eastern Ranges skipper Josh Clarke ramped up his return from injury with the Swans, making the step up to senior football after two consecutive NAB League outings.

Greater Western Sydney brought in a few of its academy hopefuls to take on, and beat, Casey Demons by a single point. All half-dozen of them had 10 disposals or less, topped by midfielder Maximus Monaghan. Fraser Kelly was productive with two goals from his eight touches, while Harrison Grintell also found the big sticks. AFL Academy member Josh Fahey returned to the fold steadily with seven disposals, as defender Sam Frost got his hands dirty with an equal number of tackles, and Luke Fellows rounded out the cohort.

A couple of powerhouse aligned clubs called upon top-aged guns, with Carlton retaining Joel Trudgeon (eight disposals, four tackles) and Richmond giving a late call-up to Will Bravo (eight disposals, three tackles) as both sides suffered losses. Sandringham co-captain Darby Hipwell also turned out in the VFL once more, snaring a goal from his 12 disposals against Collingwood.

Ewan Macpherson was another to enjoy his extended run at the level, upping his output to gather 17 disposals and four marks for the Western Bulldogs. Fellow club-tied prospect Cody Raak also donned the red, white and blue for a third time. Gippsland Power ball winner Chance Doultree was also busy with 15 touches and six marks on debut, while North Melbourne was serviced well by its own debutant in Western Jets product Sam Clifford (11 disposals, seven marks).