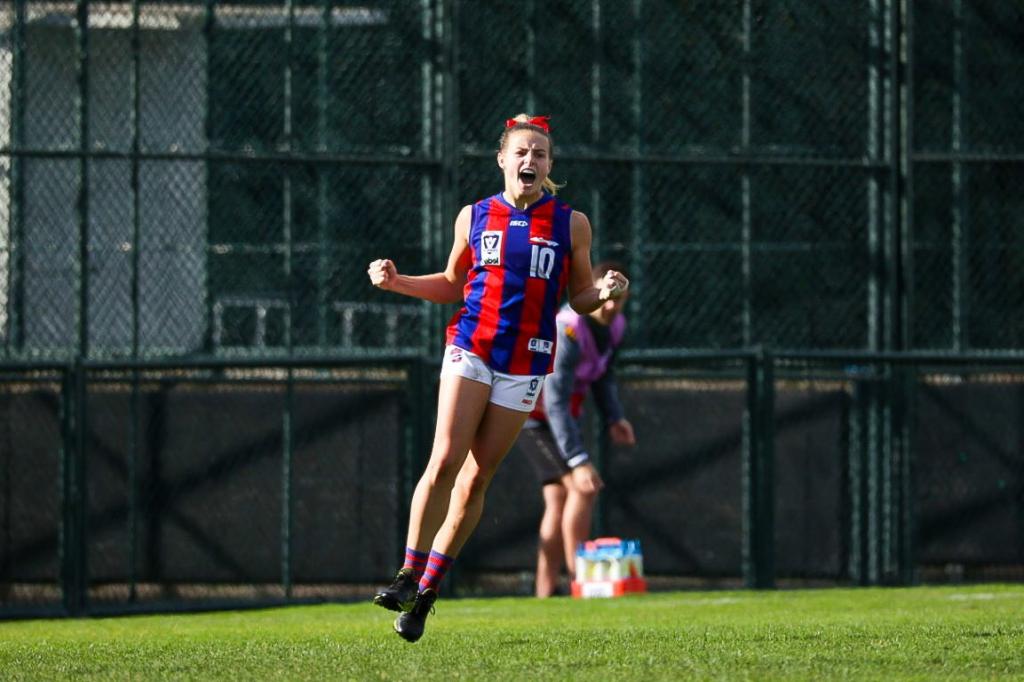 OUR second Victorian Football League (VFL) Women’s Player Focus for the week takes a look at Port Melbourne’s Sophie Locke whose season came to an end during the Borough’s defeat at the hands of the Southern Saints, but capped off a really impressive year from the former Murray Bushrangers and Vic Country representative.

Starting in the forward line, with a quick start to the game getting it kicked inside their 50m, Locke sprinted for the ball got a handball away and immediately applied a shepherd and resulted in a point, which was very smart play by the Port Melbourne forward with the instinct to straight away to give and defend. Holding width around contest throw ups gives her space to wait for it to come to her with the knowledge that there is a good chance their ruckman will get the advantage hit so she can run onto it. Burrowing into the packs and putting everything on the line just to get some clearance for her team with nothing holding her back. Ten minutes had gone by in the first term with Port Melbourne up by a point, Locke made her way up around the right side of the wing, pushing up making sure the opposition is covered and they do not have any easy targets.

Locke got around a teammate after kicking a goal and playing some real good hard football, where she was always an option for her teammates and pushing hard. With a minute left to go, Locke did what she needed to do off of the top of the 50m down the opposite end she was playing. Running through the middle and kicking it inside 50m with players running after it, she created a stoppage. Port Melbourne were a goal up at quarter time in a tight contest.

Starting the term in the top four in disposals in her side, unfortunately a lot of the start of the second quarter – up to seven minutes – the ball was stuck in the Southern Saints forward line where there was not a lot that Locke could do other then be ready for when the ball drifted her way. Locke made her way in the area and impacted straight away with a free kick going the way of St Kilda, with a rushed pressured kick coming off the right side of the boot inside the oppositions 50m where Locke was able to push it over the line. With two minutes to go in the second term, Locke pushed up to help the midfielders out and become an option.

Once again Locke pushed hard covering every hole in the opposition’s forward line, making sure everyone has an opponent which just showed the leadership she brought to her side. Being the one at the top of the forward 50m, we see the ball travel to Locke where she attacked it straight away and held it in to help give Port Melbourne a chance to score. Eleven minutes in, the ball was inside Port Melbourne’s 50m. Locke picked the ball up with an opponent on her and fakes to the left and kicks the ball to the right and kicks it through the two big white poles with the ending result being a goal. Locke also showed a nice defensive effort with a big shepherd for teammate Claire Dyett for an un-pressured kick towards goal but goes through as a behind. It was very unselfish play by Locke, recognising her teammate was in the better position and straight away thought to protect her.

And Sophie Locke doesn’t let anyone stop her!! An amazing goal giving the girls a second chance!
Saints 4.7.31 leading our
Borough 3.3.21#BornAndBred pic.twitter.com/cVKxFU5EZf

Southern Saints were up by nine points when the fourth term started. Port Melbourne needed to get a couple goals early to close the score. Halfway through the last quarter, Locke wrapped up an opposition player and won the free kick. She looked to run and carry, sold candy, dodged another player and just missed getting the football to the boot. It was a very smart move to get the ball running and going down field but unfortunately it all did not work out.

Sophie Locke showed some great football skills and her development was fast-tracked this year playing with players who are at the top end of the AFLW, not only that, but also being educated by them as well. Showing some great passage of play, to take the game on more and to be aggressive at the ball, whilst showing her confidence more. There will be exciting times ahead for the young footballer. Locke ended up with eight disposals, four kicks, one mark, four handballs, six tackles and one goal.