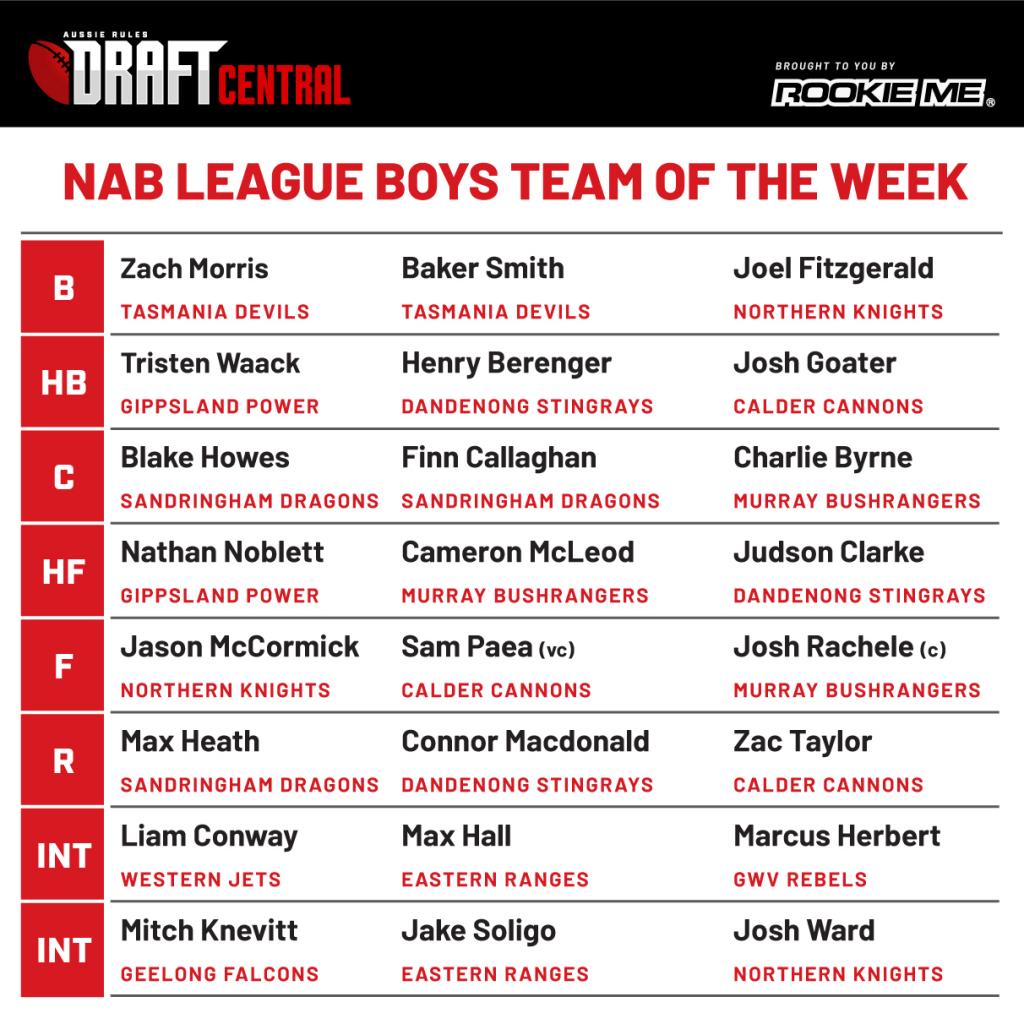 THE Draft Central NAB League Round 11 Team of the Week has dropped, with 24 of the weekend’s best performed-players featuring in a competitive lineup. Player of the Week nominees Josh Rachele (Murray Bushrangers) and Sam Paea (Calder Cannons) co-captain the side on the full forward line after snaring bags of six and five goals respectively.

After the Bushies’ impressive win over Northern Knights, the country region sees three representatives selected – so too the Knights after a competitive showing. Rachele is joined by teammates Cameron McLeod (centre half-forward) and Charlie Byrne, who keeps his spot on a wing for the second week running. First round prospect Josh Ward was the best of Northern’s bunch, having collected 35 disposals from midfield. He was still squeezed out of a ultra competitive midifeld.

Starting in the engine room are Finn Callaghan, Connor Macdonald, and Zac Taylor, all of whom racked up plenty of the ball and were arguably best afield in their respective digs. On the centreline, Callaghan is also accompanied by Sandringham Dragons teammate Blake Howes. Calder’s Josh Goater has proven a midfield mainstay to this point, but finds his spot at half-back this week after a phenomenal showing across there for the Cannons.

A pair of Tasmanian defenders – Zach Morris and Baker Smith – earned their spots on the full back line after holding up against a surging Sandringham unit, while the first of Gippsland’s two selected players also features down back. Tristen Waack is the man in question, while teammate Nathan Noblett sneaks in at the other end after a four-goal effort in the Power’s first win for 2021.

On the bench, Eastern midfielders Max Hall and Jake Soligo can count themselves unlucky not to be starting after their side’s heart-stopping win over Dandenong. The likes of Marcus Herbert, Liam Conway, and Mitch Knevitt also feature on the six-man interchange as their regions’ lone representative.

Draft Central NAB League Team of the Week: Round 11