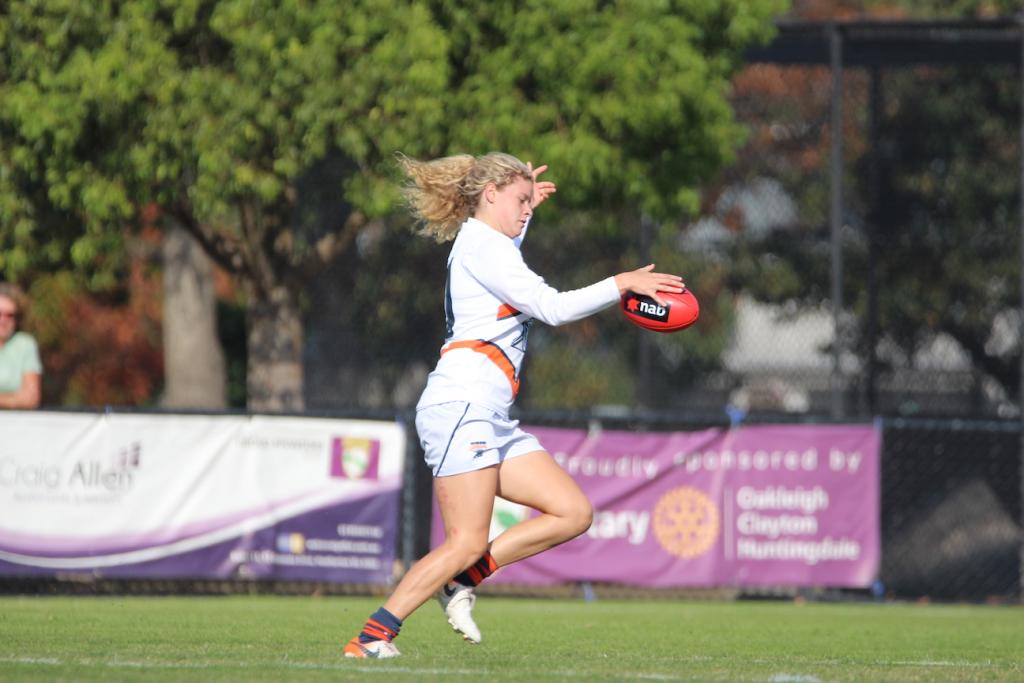 IN our latest Victorian Football League (VFL) Women’s Player Focus, we take a look at Essendon talent and Calder Cannons graduate Georgie Prespakis after an outstanding performance in her first VFL Women’s final on the weekend.

Prespakis started very strong in the midfield being used as Essendon’s main target, continuously kicking it forward to keep the ball alive. Prespakis made use of the football whilst on the ground, resulting in a forward 50 entry their way. With Prespakis laying hard tackles, it gave Essendon’s forwards more opportunity to score. Setting up behind the back of the ball ups let Prespakis the chance to get it over the back and to run and carry because of all the space she already created for herself.

With Casey Demons scoring the first goal of the match, it had Essendon hungrier for the football with Alana Barba being another outstanding player who viciously attacked the ball with everything she has got. Tara Slender showed a lot of effort to boar into the pack inside their 50m goal square but unfortunately could not keep it alive as Casey earned the ball back through a kickout. Prespakis on the other hand kept the ball alive 10 minutes and 45 seconds into their first quarter, laying tackle after tackle to create another ball up as it’s on top of their 50m. With only four minutes to go in the first term, Prespakis bashed through the pack and kicked too much to the right side for one behind.

Early start again for Prespakis with a free kick on the left side of the field within 40 seconds in the second term. Holding space around the ball shows Prespakis’ game smarts not just at stoppages but even when the ball is a 50/50, that resulted her in getting the ball and turning side on and banging it into her teams inside 50 that turned into a goal from teammate Jessie Davies. With 10 minutes passed in the second term, Prespakis made her way back onto the ground heading straight for the ball as per usual, with her tackling pressure nailing a Casey Demons opponent and winning a free kick.

She waited a few seconds and opted to play on and boots it deep into the goal square with teammate Mia-Rae Clifford taking a beautiful mark that resulted as a behind for the Bombers making it a 16-point lead. Not long after, Slender met the ball out in front as she does and receives the kick from 30 metres out straight in front of goals and nails it with her left foot.

Third term starts with Prespakis starting in the middle again, already showing her elite her ball movement across the ground. Giving away a free quick early, it made her eager to win it back for her team as she tracks the ball very smartly and leaves space at ball ups so she can run through with her speed and be free. After Casey Demons kicked their second goal of the match, Prespakis held her ground in the middle where the ball started to flood the opposite way but turned back and she set herself up perfectly putting pressure on the opposition to not get the ball cleanly. Second efforts late in the quarter helped Essendon put it in their favour but unfortunately time ran out.

The Casey Demons 4.1 (25) were catching up to Essendon 4.5 (29), with Prespakis on again in the midfield. She showed a lot of good passages of play throughout the previous three quarters. With a hot heated three minutes into the last quarter being in Casey’s end the whole time, it put Essendon under pressure, but with Prespakis’ tricky skills with a backwards handpass to her player trying to clear the ball out of the oppositions 50 was becoming a struggle. With Essendon only up by three points it was crucial everyone stayed focused. Prespakis tried her hardest to keep up with the play, but it became a little bit difficult after her enormous endurance effort throughout the whole game, but she still continued to run, and push hard to make contests.

Georgie Prespakis showing her talented skills throughout four consistent quarters, with ending up with 14 disposals, 10 tackles, nine clearances and two inside 50s. The promising young talent showed her game smarts are a level up from what she is used to playing, and playing with and against senior opponents who have already had the taste of playing the top level. The athleticism shown from her from a tough game shows a really exciting and bright future for the young talent becoming something real.