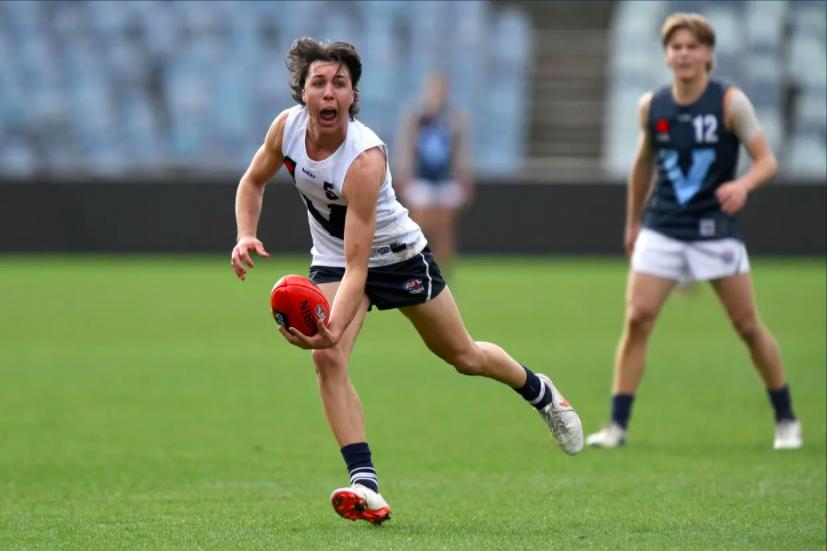 A clinical goalkicking display from the Vic Country Under 17s has seen them even the ledger against Vic Metro, downing their rivals by nine points at Queen Elizabeth Oval on Monday afternoon. Hosts for a second time running, the Country side made better of their fewer chances on goal, holding off a late Metro surge to win 12.2 (74) to 9.11 (65).

While they had most of the early territory, Metro’s radar was off and Country made them pay. Gippsland Power small forward Jacob Konstanty was involved in the game’s first two goals, first catching Zac Greeves cold in a run-down tackle, and then using a downfield free kick to pass off to Zane Duursma. When Henry Hustwaite made good on another inside 50 free kick, Country were three goals in the ascendancy. Nick Watson, who had a bunch of chances for Metro, finally replied with less than five minutes on the clock, ensuring Elijah Tsatas’ classy delivery inside 50 would not be wasted. Still, Metro trailed by seven points at the first break.

It was more of the same during term two on the scoreboard, with Country able to capitalise much more frequently. They booted five goals to Metro’s one, including the last four, with two of them coming via some brilliant Konstanty forward craft. Country’s ability to hit the leading talls inside 50 was terrific, as were the resultant conversions from Felix Fogarty and Olivier Northam at range. Matthew Jefferson was Metro’s sole form of scoring resistance and moved well for a player of his 193cm frame. His side still trailed by 28 points at half time, despite having two more scoring shots than Country.

Country looked like well and truly running away with it when George opened the scoring after half time, with the function of his side’s forwardline proving difficult to combat. Jaxon Binns’ eye-catching dribbler signalled party time, with the momentum only halted by Kai Windsor’s 50m penalty conversion for Metro. As they had done all day, Country hit back with an instant reply with Northam’s second major, before adding another for good measure to lead by 46 points heading into the last break – with only one more scoring shot.

It seemed as if the sting was well and truly out of the game during term four, with Metro taking eight minutes to get on the board and mount their fightback. But when it rains, it pours, and the visiting side slammed on a further five unanswered goals to finish in a flurry. Watson capped off the game with three in the quarter, finishing with a game-high four majors – though it was to no avail.

Jhye Clark was again a force in the Country midfield and around the ground, along with skipper Oliver Hollands and Noah Long. Classy defender Jonti Schuback provided his usual drive out of the back half before roaming further afield, while Konstanty (three goals) was a menace inside forward 50.

Watson was among Metro’s best and the spark for his side’s fightback, but it was George Wardlaw who started plenty of chains with his tough work in midfield. Tsatas used the ball beautifully from the wing and half-back, as did Paul Pascu and the productive Kai Windsor. Having made a promising start to the game, Will Ashcroft was not used after half time.