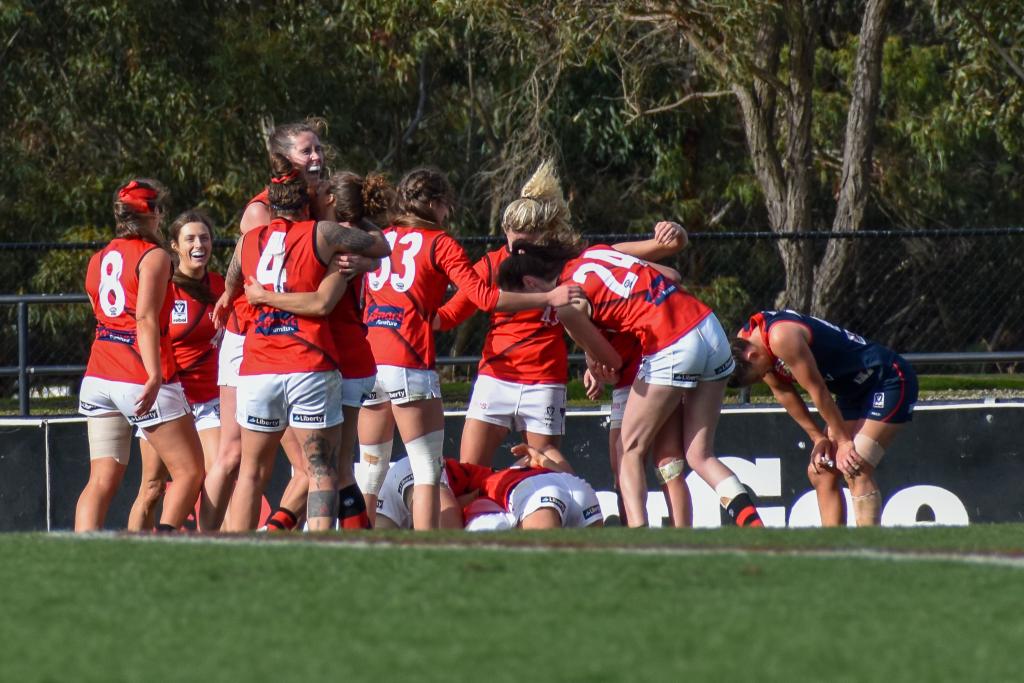 THE first week of the Victorian Football League (VFL) Women’s finals action brought plenty of excitement with close encounters leaving many fans sitting on the edge of their seats with nervous anticipation. In the end it was Collingwood that made their way straight into the semi-final while Casey were knocked out of the race for the premiership.

The top of the table Magpies proved why they were the minor premiers and reigning VFLW champions, getting the job done against Geelong by a mere goal in an absolute thriller. The Pies found their kicking boots early, nailing two goals in the opening term and suffocated Geelong’s movement and penetration up forward as they only slotted one major. This intensity continued into the third for the Magpies as they forged ahead to keep the scoreboard ticking over. It was a different story for the Cats however and despite having their fair share of chances they simply could not capitalise, registering just four points for the term.

Holding a 10-point lead at half-time Collingwood were looking to inflict more pain but Geelong youngster Rene Caris had other plans kicking a much needed goal to keep her side within striking distance. But the Pies were not about to lie down as the ever-reliable and crafty Chloe Molloy bobbed up at the right time to bang one home herself and re-establish that 10-point ball-game. More inaccuracy for Geelong left them on the outer as they tried to creep back into the game with the final quarter culminating into a make or break 15 minutes of action. Collingwood simply could not find the big sticks and subsequently did not hit the scoreboard while the Cats had a peg at the goals but could not guide them home. In the end it was the Pies that got the chocolates with some last line defence and never-say-die attitude getting them over the line.

It was another solid outing for Mikala Cann who led the black and white brigade with her 20 disposal and five tackles as Molloy showcased her class with 18 touches and a major to her name. Lauren Butler was influential racking up 14 disposals as both Marla Neal and Amelia Velardo found their share of the footy with 13 touches apiece. Velardo also impressed with her aerial ability taking seven marks as Neal imposed her physicality with eight tackles. The goal-kicking duties were well shared for the Pies as Caitlin Bunker, Olivia Meagher and Ebony O’Dea hit the scoreboard alongside Molloy. For the Cats it was their youngsters that paved the way as Darcy Moloney and Caris managed a major each. Olivia Fuller was the most prolific ball winner collecting 22 touches, six tackles and an impressive 36 hitouts. Rebecca Webster was also amongst the thick of things with her 20 possessions while Renee Garing found her groove picking up 19 touches.

It was a see-sawing affair to say the least as the Bombers just scraped over the line against Casey Demons. There was no shortage of twists and turns throughout the battle with Casey holding the early ascendancy in what turned out to be a low-scoring opening term before Essendon switched on in the second quarter to blow the socks off their opponents. A huge three goal to nothing term all but set them up for the win as they generated some real momentum heading into the second half.

But momentum meant nothing as the Demons came out with a point to prove in the third quarter. Held scoreless in the second, Casey quickly answered the call off the boot of Alyssa Bannan. The youngster managed two goals in a matter of minutes to bring the Demons back to life and although the Bombers slotted a major of their own the momentum had well and truly changed hands. It was a tantalising final term of action with the Demons up and about and hitting the lead thanks to a Shelley Heath goal but that was short lived as the Bombers unleashed through Lauren Aherns to steal the win.

Bannan had the kicking boots on for Casey finishing the afternoon with two majors to her name while Tahlia Fellows also slotted a goal of her own. In terms of major ball winners it is hard to go past Eliza West who seemed to have the ball on a string with her 23 touches and six clearances as Casey Sherriff also got busy picking up 20 disposals. Jacqueline Parry imposed herself around the contest with her 18 disposals as Brenna Tarrant racked up 17 possessions to accompany her five tackles. There was five individual goal scorers for the Bombers with Aherns slotting the sealer and racking up 19 touches as Alana Barber showcased her wares slotting a major and walking away with 18 disposals and a whopping 11 tackles. Youngster Tara Slender also hit the scoreboard as Georgia Nanscawen and Cecilia McIntosh starred with ball in hand racking up 28 and 20 touches apiece.

With the momentum behind them it was time for the Saints to put the foot down and that they did. An early miss from Tyanna Smith was quickly made up by Jess Matin who nailed her first major for the game to extend the lead for the Saints. From there on out the Southern Saints continued to build and forge ahead. They kept Port Melbourne to one goal for the entire second half while they piled on four. They could have won by more if they were accurate in front of goal with the Saints registering seven behinds in the last term alone as fatigue started to kick in for both sides.

It was a tough day at the office for the Borough but that did not stop Olivia Barton from digging in as she racked up 15 disposals, all of which were by foot. Ellie McKenzie was also amongst the top performers for Port Melbourne finishing with 13 touches and three clearances to her name as Cleo Saxon-Jones got busy across the ground with her 12 disposals. Emily Harley, Sophie Locke and Brooke Vickers were the three goal scorers for the Borough while for the Saints Matin and Tara Bohanna slotted two each. They also topped the table for possessions collecting 20 apiece as Matin dug in deep at the coalface credit to her six clearances. Gabrielle De Angelis also found plenty of the footy with 18 touches and a goal. Hannah Stuart was never far from the ball amassing 18 disposals as teammate Rebecca Neaves registered 17 touches and four marks in the win.