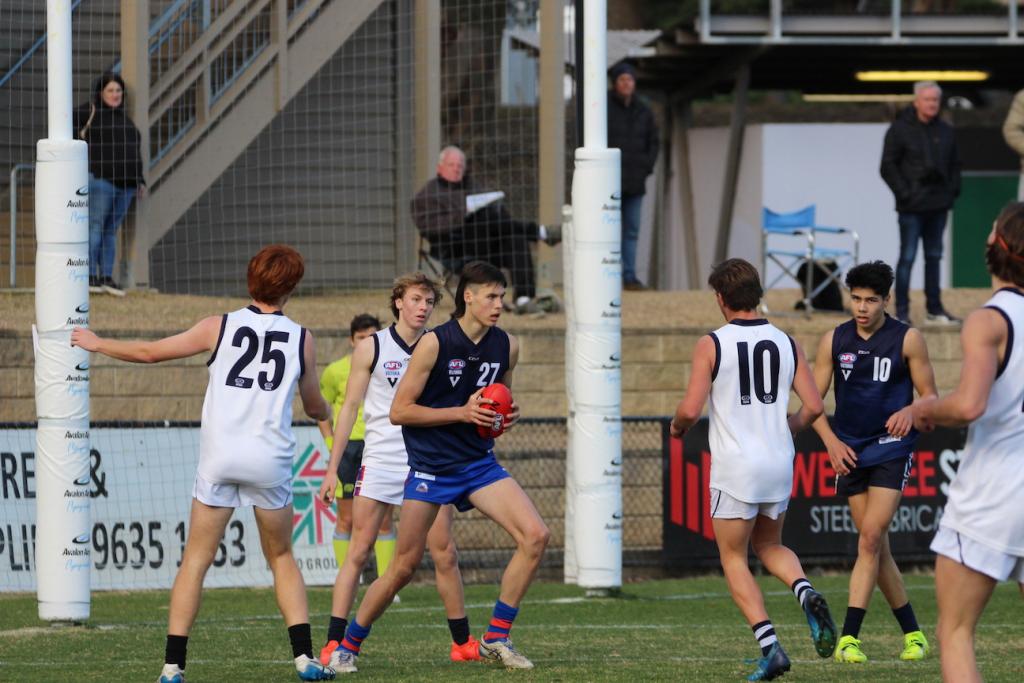 AFTER fulfilling their representative obligations last week, a bunch of draft eligible guns are set to return to the NAB League in Round 11. Five of the weekend’s six fixtures are set to be played on Saturday, starting with a trio of intriguing matchups which bounce down at 1:00pm across the state.

Headlining the inclusions in those games is Western Bulldogs father-son prospect Sam Darcy, fresh off his six-goal haul in last week’s trials. Having previously started down back for Oakleigh, he has unsurprisingly been named at centre half-forward for the Chargers’ clash with Greater Western Victoria (GWV).

While Darcy is a massive in, the Chargers look like they will be without skipper Nick Daicos, who continues to be managed. Nonetheless, they should be buoyed by Lachlan Rankin‘s return among a raft of other Vic Metro Under 19 squad members. Tasmanian Sam Collins also gets an extended run in midfield after impressing there last time out.

GWV also has plenty of its own representative talent returning to the fold, led by first round prospect Ben Hobbs. The combative midfielder has played just three games this season amid injury troubles, but has served a reminded of his high-end talent over the last fortnight.

With Marcus Herbert, Sam Breuer, and returning Allies hopeful Nick Hodgson part of the primary centre bounce mix, Hobbs has been named to start at half-forward. The Rebels have quite the spine too, bookended by Josh Gibcus and powerhouse skipper Josh Rentsch.

In the day’s other 1:00 start, Murray Bushrangers host Northern Knights in Wangaratta, with plenty of players to watch on each line. After lining up on Daicos a couple of weeks ago, Josh Ward‘s next assignment may come against Bushies top-ager Zavier Maher. The latter’s inclusion has squeezed Charlie Byrne to the wing, while Josh Rachele will start forward and Tom Brown returns in defence. Twin Northern talls Sam Grant and Anthony Caminiti also come in for their second games in the navy, black and white.

Sandringham has named a bumper midfield trio for its trip down to Tasmania on Saturday, with Josh Sinn, Campbell Chesser, and Finn Callaghan to attend the opening centre bounce. Chesser makes his long-awaited return from a knee injury, while Sinn did so last week in the NAB League, and Callaghan has been in red-hot form on both sides of midfield.

The competition for spots sees Charlie McKay shifted to half-back and Lachlan Benton starting on the bench, while debutant Lachlan Brooks may ply his trade as a small defender. St Kilda Next Generation Academy members Marcus Windhager and Mitch Owens are also among the Dragons to watch. For the Devils, Sam Banks is a massive inclusion after missing a chunk of football through injury, as is Darcy Gardner who will look to crack a rather settled midfield once again.

After an impressive five-goal haul in Vic Country colours, Dandenong Stingrays midfielder-forward Judson Clarke would have been one of the first on Nick Cox‘s team sheet for his side’s clash with Eastern Ranges. The showcase Saturday night game also sees Will Bravo and Connor Macdonald return to the hosts’ midfield.

Jake Soligo will be the go-to ball winner for Eastern as Tyler Sonsie recovers from bone bruising, with a tough test ahead. Corey Preston has been named at half-back after impressing there with his ball use during last week’s trials, but intercept marking machine Tyreece Leiu remains absent as he nurses a corkie.

In Sunday’s standalone fixture, the Western Jets travel to take on Gippsland Power in Morwell. The hosts should get plenty of drive from their starting centeline of Max Walton, Will Papley, and Cooper Alger, while Jai Serong in a welcome inclusion up forward. Western welcomes back match-winning small forward Paul Curtis, with the likes of Liam Conway and Harrison White also handy additions to a midfield which will operate under Geelong-listed ruck Paul Tsapatolis.