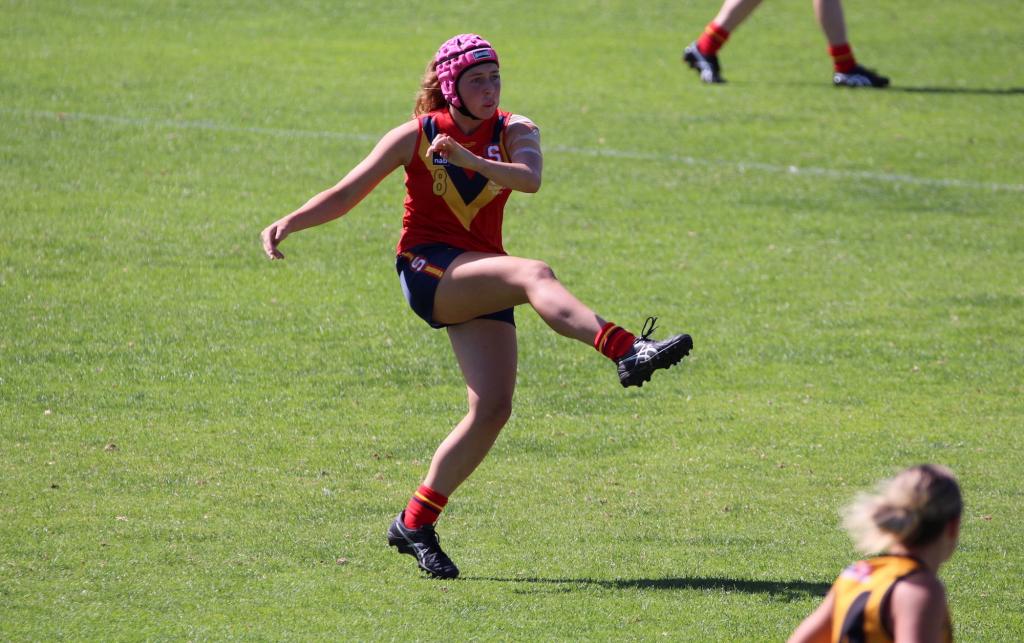 A FIERCE competitor who tackles hard, brings her pressure game to each line, and doesn’t mind a scrap. On face value, you’d think Charlotte Dolan hails from a much different sporting background than her soccer and surf lifesaving past. The helmet-donning Woodville-West Torrens prospect is unmistakable on-field, though.

Dolan completed just her second SANFL Women’s campaign in 2021 after a promising debut season last year, with her choice to pursue Australian football paying off in the form of repeat state representative honours. It has proven quite a journey for the 18-year-old.

“I started playing football five to six years ago and it’s been non-stop since then,” Dolan said. “From SMOSH West Lakes, [to] Henley Football Club, to the Eagles, and now I’m here.

“I stopped playing soccer about four years ago… the honest truth is I had a soccer coach who said I had to choose. “I was doing surf lifesaving, soccer and football and it was all too much so my soccer coach told me to choose, and I chose football.

“I felt more of a family was around the football community and I was enjoying it a lot more, enjoyment comes before anything else.”

In a season which Dolan modestly rated as “not too bad”, she averaged over seven disposals and four tackles across her nine SANFLW outings. The top-ager boosted those numbers come National Championships time, making it eight disposals to go with 2.3 marks and 2.7 inside 50s.

Having been utilised on both sides of midfield, up forward and down back, it is fair to say that Dolan’s punishing pressure game easily translates to all of the above. She says that kind of “versatility” is one of her strengths.

“I’d say I’m quite a fierce and aggressive player,” she said. “I like to lay the game-changing tackles and I believe I’m an alright kick, a long kick as well so I think they’re mostly my strengths.

“My marking has always let me down a fair bit but I have improved a lot from where I was – from playing soccer and being scared of having a ball in the face to where I am now, I think I’m doing alright.”

Outside of football, Dolan says there isn’t “a whole lot” going on. Shortly after her South Australian representative stint, she looked forward to the Australian surf lifesaving titles, but also fills her time working at AFL Max which is “a bit of fun”.