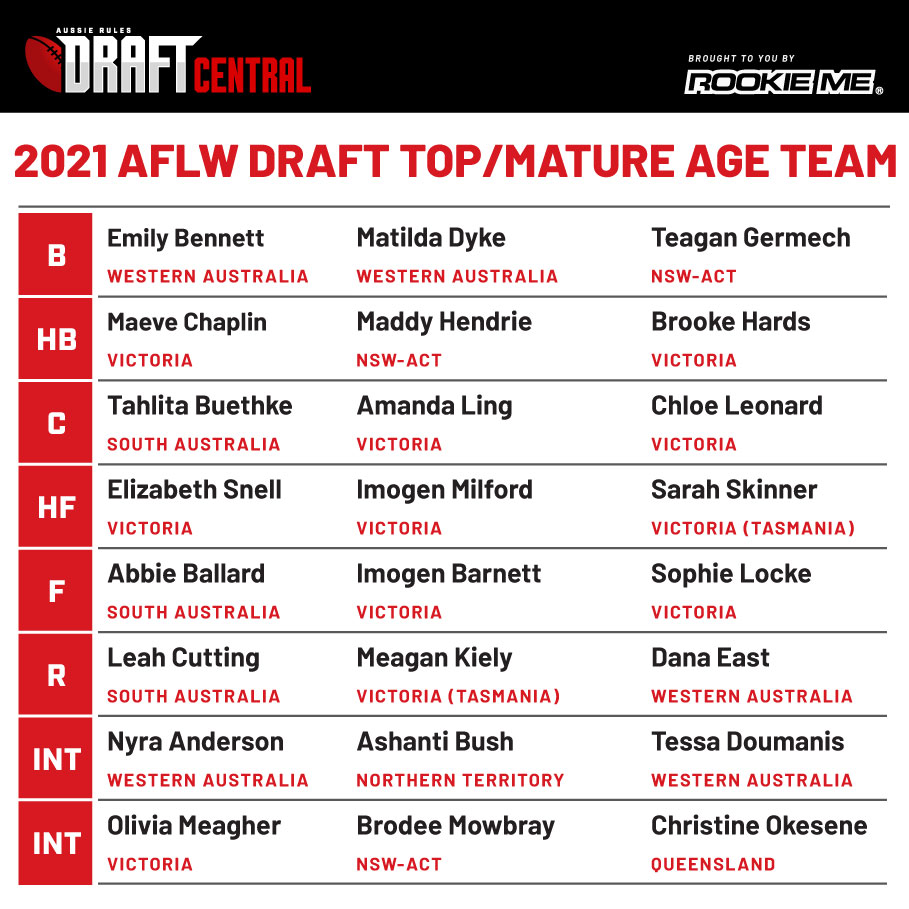 BE it 19-year-old talents who for one reason or another missed out last year, or mature-age players who have put together breakout seasons, there are plenty of player vying for a spot on an AFL Women’s list. The AFL Women’s Draft occurs on July 27, and plenty of players from almost 19 to 29-year-olds, we have put together a team of players who are in contention for this year’s draft. We have also named a number of others who are also in contention beyond the 24-player limit. The team features only 2002-born or prior players.

The deepest three features a Claremont duo who have put together a couple of good seasons, with Emily Bennett providing some one-on-ones and ability to hit targets further afield, and Matilda Dyke being a lockdown player who can move around the ground and not only intercept but provide some drive as proven at the AFL Women’s Under 19 Championships. Teagan Germech is a tall who not only can run off half-back, but provide an intercepting option and one who could roll into the ruck as well as she does at the Magpies.

Chaplin is capable of playing inside or off half-back, providing good versatility as one of the more consistent ball-winners in the NAB League this season. As a year older, Northern Knights’ Maeve Chaplin showed her experience throughout the season, having opted to head back to the junior age comp then progress into the VFL Women’s. Going straight there was Western Bulldogs’ Brooke Hards who went from being that predominant inside midfielder to a bit of everywhere, but has settled on half-back as someone who can provide great run and carry and uses it well going forward. The other tall rounding out the back six is NSW-ACT’s Maddy Hendrie, a versatile utility for Sydney Swans Academy.

Through the middle there is a mix of speed, hardness and versatility with a trio of 19th-year prospects running around. On one wing is South Adelaide’s Tahlita Buethke who has one of the best athletic profiles going around with her blistering speed and strong endurance. On the other wing is the versatile Chloe Leonard who could play off half-back, inside or outside, and had an ultra-consistent season for the GWV Rebels in NAB League Girls before representing Geelong in the VFLW. In the centre is Oakleigh Chargers’ best on ground in the grand final, Amanda Ling who has a nice balance of inside and outside traits, as well as consistency.

Three players who have run around at VFL Women’s level – and two as permanent fixtures this season – start off the forward line. The youngest is top-age talent Elizabeth Snell who has represented Essendon as well as Bendigo Pioneers and Vic Country, playing as a midfielder who can go forward and provide great pressure as well as creativity inside 50. North Melbourne’s Sarah Skinner is one of the top mature-age prospects going around, hailing from Tasmania and stepping up in the VFLW to go from a reliable goalkicker to a dominant midfielder. Imogen Milford finished second in the VFLW goalkicking and is still young and developing as a 190cm key position talent.

A real mix of sizes and versatilities rounds out the forward line, with VFL Women’s leading goalkicker Imogen Barnett hardly putting a foot wrong, and putting her hand up as a key position mature-age option. She is flanked by another VFLW player in Sophie Locke, with the ex-Murray Bushrangers talent and now Port Melbourne goalkicker leading the goalkicking at the midway point of the season prior to injury. She can also play in defence as she did for Vic Country a couple of years ago, whilst Abbie Ballard is a pocket rocket with a potent left foot who can play midfield or up forward and provide some high-level pressure, as well as scoreboard impact when running around at SANFLW level for the Bloods.

The two oldest players in this team are onball, with 29-year-old Leah Cutting the most readymade of any AFLW Draft Combine invite to slot straight into a ruck spot. She was the clear choice for the role in this team, as was North Melbourne’s Meagan Kiely for the ruck rover spot. Kiely was the most dominant ball-winner in the VFLW, and played consistently well each and every week to be amongst the best player in the competition, with the Tasmanian having relocated to Victoria. She is joined in the side by Swan Districts’ Dana East, whose transformation onball at WAFLW level this season has been sensational and really put her hand up for the AFLW Draft.

The interchange is always the hardest place to pick as it rounds out the side with plenty more still capable of fitting in. Alphabetically-listed on the bench, there are a couple of West Australians in Nyra Anderson and Tessa Doumanis – both of whom do their best work forward, whilst Ashanti Bush is a classy AFLW Academy member inside 50. Brodee Mowbray is a tackling machine through midfield, with Olivia Meagher expanding her game to play outside this year to go with her inside talents, and Christine Okesene able to play off half-back or through the midfield.

A few other names who were in contention for a spot include Queensland duo Madison Goodwin and Steph O’Brien, and Northern Territory’s Bella Clarke who all received AFLW Draft Combine invites. In Tasmania, Ella Maurer put together a consistent season, with Matilda Zander and Alana Barba the next two VFLW players to keep an eye on. Over in Western Australia, Jess Low is one known for winning the ball and having an impact, whilst Jade Halfpenny has developed into a versatile tall in the SANFLW for Norwood.