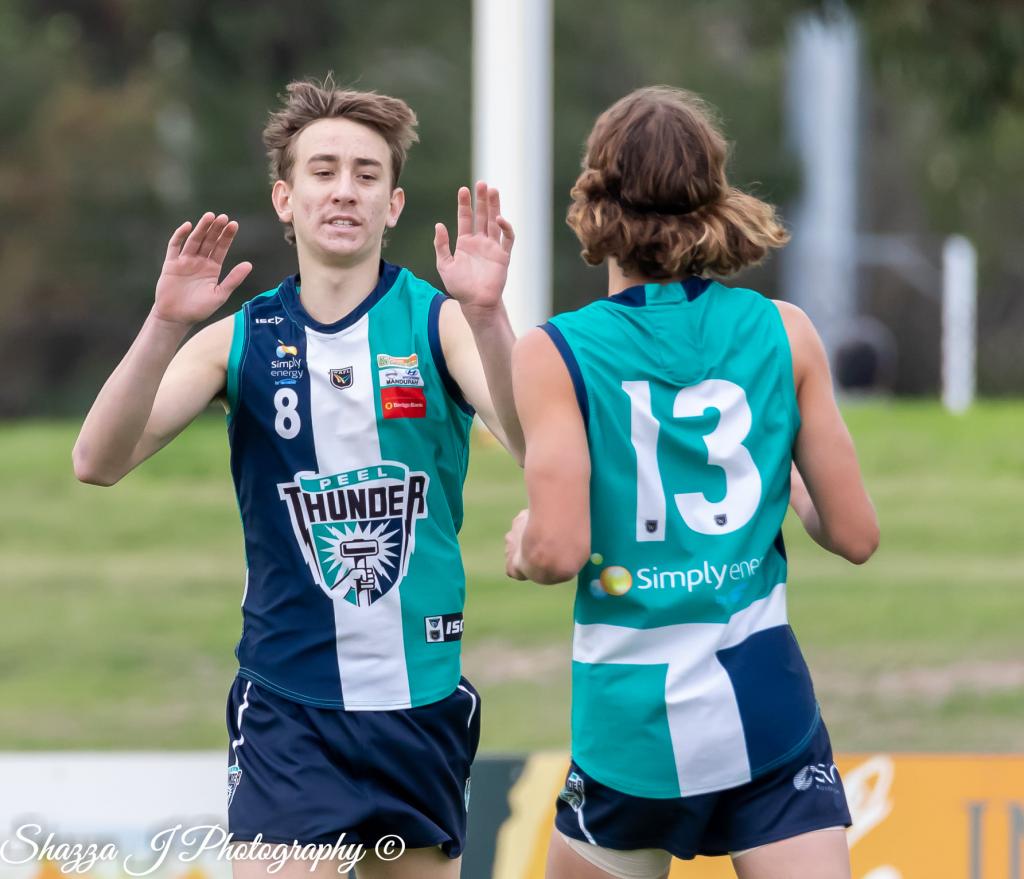 EAST Perth solidified its second-place status in Round 12 of the WAFL Colts competition, defeating Peel Thunder by 52 points at David Grays Arena on Saturday morning. The Royals’ win was once again spearheaded by rising key forward prospect Jye Amiss, who booted a career-high seven majors to extend his lead atop the league’s goalkicking charts.

Peel started the better of the two sides, keeping East Perth goalless in the opening quarter and dominating the territory to open up a 20-point buffer with five minutes down in term two. That was where things quickly changed, as Amiss and Kaden Harbour each booted two goals within the next 10 minutes to give their side the lead. It ended up being a six-goal run for the Royals, who lead by 17 points at half-time.

The scrappy, fast-past contest began to open up after the main break, with both sides adding three majors in the third quarter. Amiss’ fourth conversion came right before the siren with a miraculous effort in the goalsquare, and East Perth carried that momentum into a one-sided final period. The Royals poured on five goals to nil to see out the game, making for a healthy 14.7 (91) to 6.3 (39) victory.

We take a look at a few of the top performers from either side in our Scouting Notes, and go around the grounds with some of the other outstanding Colts performances out of Round 12.

The busy small midfielder was the best player afield in the first half, collecting 19 disposals and booting two goals by the main break. Tuia was able to drive forward with his bursts of speed from midfield, but had his momentum halted with some extra attention in the second half. He booted both of his goals in the opening quarter, the first two of the game overall, with a well-hit set shot and classy snap on his favoured left side. He ended up with 24 touches and four inside 50s on the back of his hot start.

The Under 19 state squad bolter built into the contest well for Peel, getting his hands on the ball and showing patches of his usually smooth movement. Hough was sighted a fair bit up forward in the first half but could not quite make good on his goal opportunities, before proving his class on both sides of midfield. The Peel standout’s best moment was a poised stop and prop at half-forward, before delivering a well-weighted pass to a leading target inside 50. He racked up nine of his team-high 27 disposals in the third term, having lifted amid East Perth’s dominant patch.

Peel had players who showed glimpses of form, but solidly-built defender Darcy Wills was one of his side’s more consistent performers. Jackson Broadbent won 24 hitouts in the ruck where he held his space well, while Ethan Donaghy and Kallian Levitt had their moments in possession, and Taj Wyburd got his hands dirty with 11 tackles.

The standout key forward of this year’s competition went to another level on Saturday, booting a career-high seven goals to take his overall tally to 37 in nine games. It came after he was held statless in the opening quarter, hardly getting a look as Peel dominated. His fortunes turned in term two, as the Royals spearhead kicked two goals in quick succession to put his side in front, before adding majors on the half time and three-quarter time sirens. He capped his game beautifully with three goals in the final period, with his set shot conversion looking seamless. Amiss also displayed his clean hands and ability to work up the ground, with his laser-like left foot coming in handy there too. He enters top 25 calculations.

Playing on both sides of midfield, Littleton was able to showcase a bit more of his inside game on Saturday with 21 disposals and six tackles in a solid outing. He played a key role during the second term as he was moved onto Peel’s Scott Tuia, who had 10 touches and two goals in the first 25 minutes. Littleton also found his own ball and pumped home a long-range goal on the end of a 50m penalty, proving reward for his effort.

In tandem with Amiss, Harbour was one who provided a real spark for East Perth during the second term, hitting the scoreboard with goals in quick succession. He finished well on those occasions, lurking in good spots and latching onto the ball in motion. His major in the following term showcased super pace, as Harbour was first to a ground ball in the pocket and sprinted into the goalsquare to nab a third.

Brooks ended up the leading ball winner on the ground with 30 disposals and he did so in rather unassuming fashion, with much of his work completed at the coalface. He showed clean hands in the clinches and was a handball-first kind of outlet, with 20 of his touches coming via that method. Brooks, who had previously played the entire season at Reserves level, used his mature body to advantage and helped East Perth get on top where it matters most.

James Tunstill was again terrific in midfield, winning 23 disposals and laying eight tackles as he tried his best to push the Royals forward. West Coast Next Generation Academy (NGA) member Sokaa Soka showcased his athleticism with 17 disposals and 28 hitouts, proving his work was far from completed away from the ruck contests. Max Riley was solid behind the ball with 16 disposals and seven marks, while Jayden Peak popped up to snare a couple of goals.

Ladder leader, Swan Districts remains clear in top spot after a comprehensive 80-point beating of Subiaco. Ayden Cartwright had a day out for the Swans, booting 5.3 from 27 disposals and eight marks, while fellow midfielder Ben Hewett snared three majors from 25 touches. The Swans engine room was strong, with Max Chipper (25 disposals) also running through there and Ty Sears (21) roaming the outer. Rhett Bazzo also got a rare Colts game in but was quiet by his standards, while first round prospect Matthew Johnson collected 16 touches for Subiaco.

Claremont jumped to third with its 20-point win over West Perth, with the Tigers making much better use of their equal amount of scoring shots. Kendyll Blurton put in a monster shift through Claremont’s midfield, racking up 31 disposals and six inside 50s, while Talon Delacey’s form continued with 26 touches. Bottom-agers Kane Bevan (17 disposals, six tackles) and Luke Michael (14 disposals, seven marks) featured well for the Falcons.

In the round’s final fixture, South Fremantle handed Perth a ninth-straight loss, saluting to the tune of 54 points. Bulldogs ball winner Caleb Stephens notched 34 disposals and seven inside 50s, while Chase Bourne was impressive with 27 touches and two goals. Regan Hill was solid for the Demons, finishing on 24 disposals and a goal.