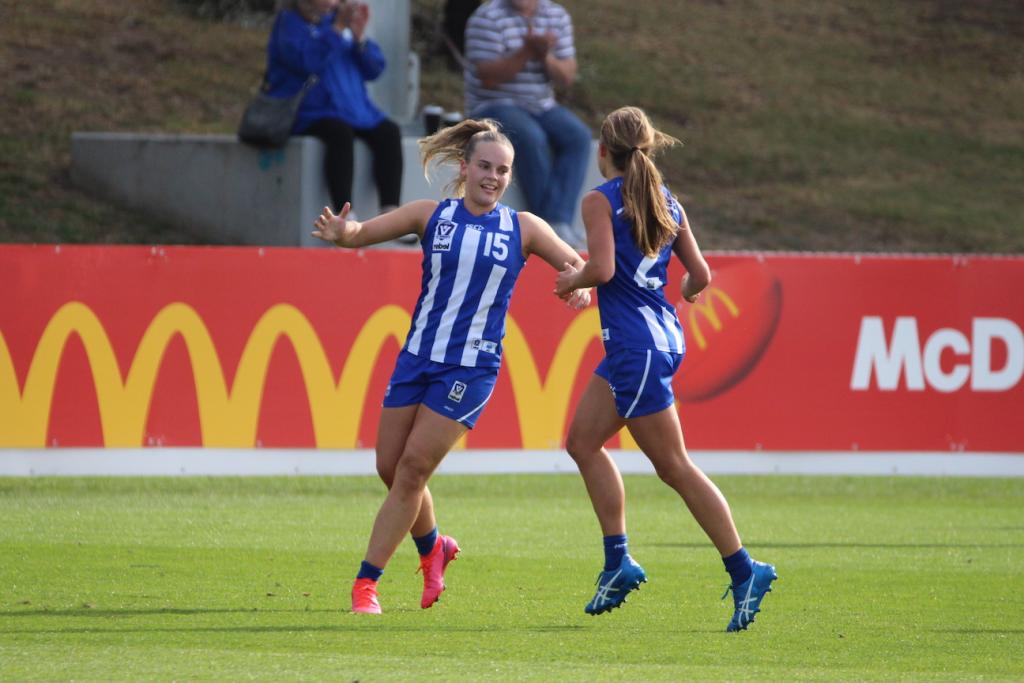 NORTH Melbourne VFLW winger Sarah Skinner has enjoyed a stellar 2021 VFLW campaign, moving up from Tasmania to link with the Roos and put her hand up as a mature-age draft prospect. While her side went down to the Southern Saints on Sunday, Skinner was one of the best players afield with 17 disposals, seven marks, and two of her side’s three goals. We put her performance under the Player Focus microscope.

Q1:
Right from the opening minutes of the game, Skinner sprung into action as she took a mark – the first of many that the Tasmanian young gun produced throughout the game. Following on from her classy mark, Skinner booted a goal for her side to set up what would be a stellar performance. Skinner demonstrated poise as she was involved in a passage of play which saw her get possession of the ball before making her first handball for the quarter. Yet another touch for Skinner, this time through her second mark of the game. A missed opportunity emerged in the remaining minutes of the term, as the young gun attempted to gain possession of the ball was too late as it was deemed out of bounds.

Q2:
The second quarter quickly rolled around and once again, Skinner continued to dazzle. A major highlight included four marks taken in the space of a quarter, all of which were nicely executed under immense pressure. The 21-year-old made a handball over to teammate Alexia Hamilton. She also got a touch of the ball after a Southern Saints player fumbled the ball, leading to her kick made to another teammate Brooke Slaney. Skinner found a slight stumble during the game as she attempted to take a mark but was not able to hold onto it. Another handball was made to Hamilton, an important dynamic shaping up between the two players.

Q3:
The beginning of the second half was a more quiet one for the Tasmanian star. Quarter three saw Skinner get a touch of the ball as she got amongst the action of a game which was starting to intensify. She also was involved in her first tackle for the game and looked comfortable defending the ball.

Q4:
Skinner got back to her best in the final term, putting her athleticism on full display but not before a small mishap with a missed attempt at a mark. Her redeeming move came as a result of her seventh mark of the game, which was made in front of an opponent from the Southern Saints. Skinner’s involvement in a second tackle occurred in the final term. She managed to get another kick in during the quarter which ended up in the hands of an opposition player – something which wasn’t needed for North Melbourne with the scoreline steadily widening. The Tasmanian capped off a brilliant game with another kick to a teammate.

SUMMARY: An impressive and overall consistent performance from the North Melbourne star, with just a quiet third quarter in the books lowering her impact. Skinner shone in the marks department as she took seven in her side’s loss. Her performance highlighted her versatility as she shown she was good with disposals, bagged a couple of goals and made a statement getting involved in the action with two tackles. Her performance against the Southern Saints in Round 14 highlights how crucial she is to her side.