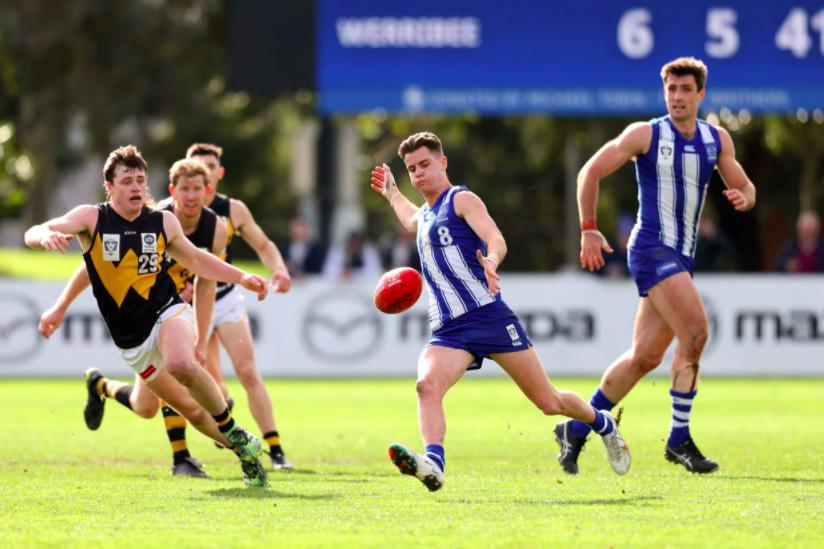 FULL-TIME fixtures were back in the South and West Australian state leagues, where a raft of upsets shook up proceedings, while Victorian fans were treated to nine games and it was business as usual down in Tasmania. We run you through all the results from around the nation and what they mean in this week’s state leagues wrap.

One fixture was cancelled, but the show rolled on in the VFL as Round 11 came around. Geelong emphatically returned to the winners list on Friday night, opening proceedings with a 118-point trouncing of the Brisbane Lions in the Sunshine State. Three of the Cats’ 12 individual goalkickers booted four goals as their AFL-listed brigade took full toll, including Charlie Constable (44 disposals, nine marks, one goal) in the engine room.

All of the round’s remaining fixtures took place in Victoria amid interstate Covid chaos, with a new ladder leader crowned. The undefeated Footscray Bulldogs are that side after easing past Coburg by 32 points, with Patrick Lipinski (29 disposals) among those pushing for a senior call-up. Bulldogs father-son prospect Ewan Macpherson booted two goals from 11 touches after being overlooked for Under 19 Vic Metro honours, while another Northern Knights product in Marcus Lentini racked up 43 disposals for Coburg.

North Melbourne’s positive run of form continued as the Roos knocked off Werribee by under a goal, with the top eight squeeze getting ever-tighter. Collingwood snuck in with a win over Frankston, pushing the Dolphins out in the process, while Box Hill solidified its spot after blitzing Aspley after half time, and Sandringham compounded the hurt of a poor weekend for Richmond fans, getting up by five goals over the Tigers.

A memorable quartet of Sunday games was kicked off at Casey Fields, as the home side improved to 6-0 after beating Essendon to the tune of 48 points. Familiar faces in Ben Brown (five goals) and Nathan Jones (36 disposals) staked their claims for senior action, with the Demons flying at both levels in 2021. The Northern Bullants’ journey came full circle as they defeated Carlton by 32 points at Preston City Oval, making for a fitting first win on the season at their traditional home.

A heated derby clash between Williamstown and Port Melbourne resulted in the Seagulls claiming a 37-point win, with plenty of fines to be handed out after an all-in brawl at quarter time. The round was seen out by another derby, of the Sydney variety, as Greater Western Sydney defeated the Swans by 38 points. The game was played in Melbourne and a host of top-up players were fielded across either side, allowing a bunch of NAB Leaguers to gain some valuable state league experience.

Full competition resumed in the SANFL for Round 12, with the weekend’s proceedings extended back out to five fixtures after last week’s two-game set. North Adelaide opened the show on Saturday by dislodging Port Adelaide from the top five, taking the Magpies’ spot with a 76-point beating. Harrison Wigg was excellent for the victors, claiming 30 disposals and two goals, while former Port midfielders Aaron Young and Andrew Moore combined for 49 disposals and 15 clearances. Keenan Ramsey was also key in establishing the Roosters’ ascendancy, finishing with 3.2 from 15 touches and 12 marks.

Norwood solidified its spot in the top five with a five-goal win over Central District, helping the Redlegs draw level on points with the two other sides chasing Glenelg. South Adelaide is one of those teams, but the Panthers faltered on Saturday in an upset loss to Sturt. Inaccuracy cost the top five side dearly, though it meant the Double Blues would send off premiership player Mark Evans off on the right note. In Sunday’s lone fixture, Glenelg stretched its unbeaten run to 11 games, downing reigning premier Woodville-West Torrens by 19 points to only further their flag credentials.

Fresh off a bye, North Launceston kept touch with the Blues after beating Tigers by an even six goals, setting up a two-game buffer to their weekend rivals in the process. A three-goal haul from Northern Bombers player-coach Bradley Cox-Goodyer saw him earn best afield honours. Glenorchy chalked up a fourth win in the round’s other game, beating last-placed North Hobart by 25 points as five-goal hauls to Harrison Gunther and Nathan Hardy headlined either sides’ efforts.

South Fremantle was the only team to beat a side below it on the ladder in Round 12 of the WAFL, amid a weekend littered with upsets. The Bulldogs accounted for Perth with a 34-point win, proving too strong and drawing within a game of top spot. Competition frontrunners Claremont remain clear in first despite a 14-point loss to West Perth, as the Falcons were led by usual suspects Aaron Black (34 disposals, 12 tackles) and Tyler Keitel (12 disposals, five marks, 3.2)

Swan Districts knocked off the other top two side, Subiaco, holding off the Lions despite some goalkicking inaccuracy. Jesse Palmer was a key culprit with one goal and six behinds, though it mattered little as his side got the job done to keep its two-game buffer inside the top five. Looking to close on Swans is East Fremantle, though the Sharks went down by 51 points to West Coast, in the Eagles’ second win on the season.

West Coast remains in bottom spot despite the result, after East Perth also notched its second-straight victory by shaking down the Peel Thunder. The Royals trailed at the first three breaks but enacted a terrific comeback effort after half time, ending up seven points to the good and drawing level on premiership points with their weekend adversaries.