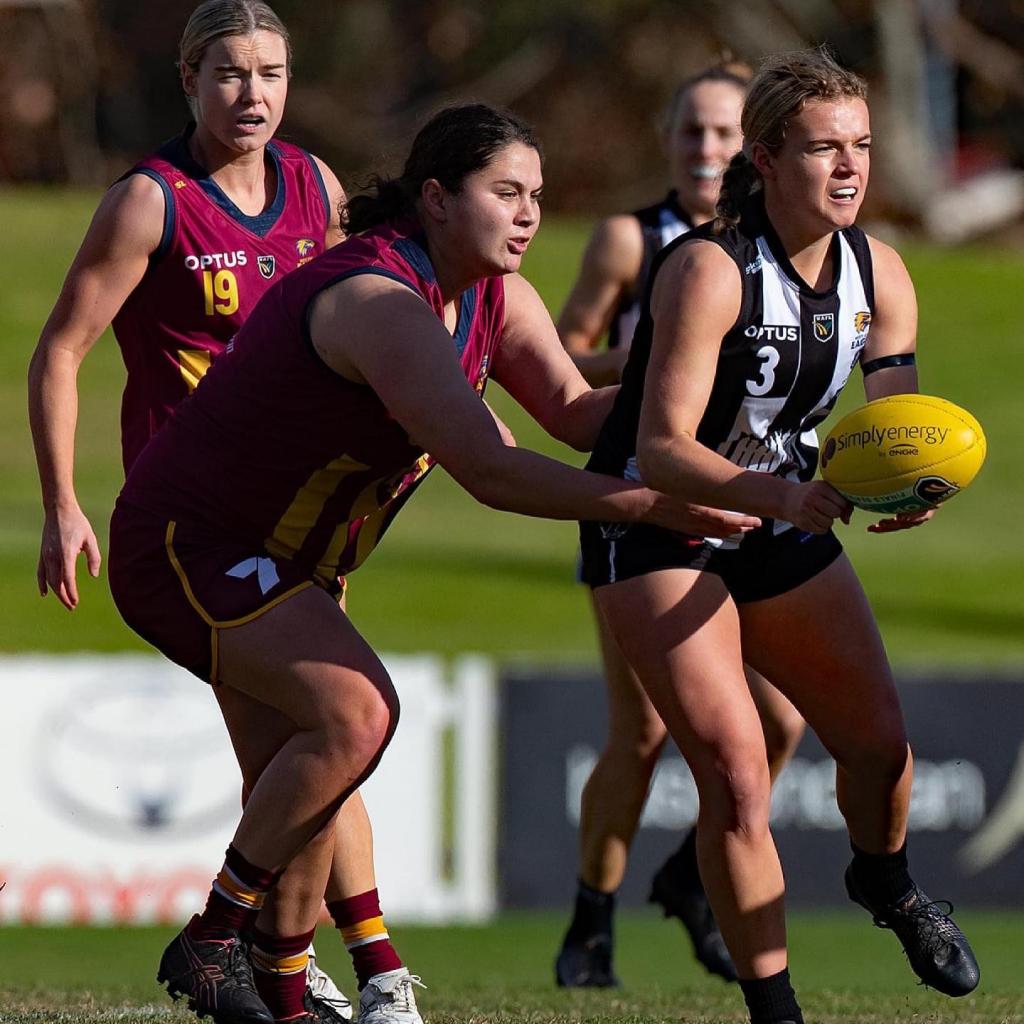 SWAN Districts have utilised their double chance to secure a rematch with reigning premiers Peel Thunder in the 2021 West Australian Football League (WAFL) Women’s Grand Final after defeating Subiaco by 38 points in yesterday’s preliminary final. The Swans only led by a point at quarter time and four points at the main break, but booted five goals to zero after half-time, restricting Subiaco’s chances with a strong defence, then being able to capitalise on the scoreboard during the 7.8 (50) to 1.6 (12) win.

After not scoring a major last week, it was crucial that the minor premiers got on the board in a big way early, and they did that through goalsneak Nyra Anderson who was calm and composed from close range. It came after some neat play down the field from Bella Edgley to Bianca Webb to set up the goal, and the home team were on the board. Not long after, Hayley Corlett got on the end of a similarly impressive team play, to put one through with an open goalsquare.

Both teams had their chances early with McKenzie Dowrick and Dana East impacting through the midfield for their respective sides, and Mikayla Hyde looking classy in the forward half. Edgley was providing a target at half-forward and Tara Stribley almost added her name to the goalkickers list running back to goal, but a huge defensive effort from Taylisha Brown – who earlier set up the Corlett goal – forced a rushed behind and the favourites heading into the break with a one-point lead.

Dowrick continued her form into the second quarter, thumping it inside 50, but the likes of Lauren Osborne, Eliza Gelmi and captain Emily McGuire were a wall in defence. It almost looked like the Hyde sisters – Mikayla and Brianna – Anderson and Edgley were going to create something out of nothing, as the latter sold some candy to Claire Ortlepp but just missed the quick kick after. Soon it was Taylah Edwards that created something out of nothing from a stoppage with a snap around her body bouncing home midway through the quarter to hand her side a buffer at the break. The Lions almost had a chance to level the scores off the boot of Dowrick on the side, but it missed to the left.

The Subiaco forward line had looked good in the first half, with debutant Madison Dodd playing deep and the likes of Kia Buckley and Jamie Rust in the vicinity. But the experience of the Swan Districts defence was always going to come to the fore, and it did so in the second half, when they ramped up the pressure. Mikayla Hyde set the tone in the opening 30 seconds, going for a mark knowing she was going to get crunched, and then having a snap on goal not long after. The pressure was overwhelming and soon Anderson had her second on the run with a clever goal thanks to some quick thinking from youngsters Stribley and Abbygail Bushby inside 50.

With the forward half dominance, Swans captain McGuire pushed up to create an extra number, and produced an uncharacteristic wobbler off the boot, but it proved effective, sailing home midway through the term. She returned to centre half-back after the goal, but continued to look dangerous around the forward 50 when her team was in possession. Subiaco had a golden chance to score a major through Buckley at the top of the square, but the young talent missed under pressure. Hayley Miller was trying to will her side on, and the defence through Ortlepp was holding up. Though the Lions still found themselves three goals down at the break and needing a spark.

Swan Districts could smell blood in the final term, as a costly 50m penalty for the Lions handed the home team and McGuire another goal, this time the easiest of the lot from the top of the square. When Sarah Wielstra got on the end of one from a clever East kick deep, the margin was out to 30 points and the game was done and dusted. Bushby had a chance herself nine minutes into the term but just missed the set shot to the left, though by this stage it was all inside Swan Districts forward line. The Swans held Subiaco scoreless in the final term, as McGuire bombed her remarkable third goal from 50m out to put a final nail in the coffin.

A shot in the final minute from Steph Cain, and then a thumping kick from Osborne tried to get their names on the goalkicking list after seeing McGuire’s heroics, but they were not to be. In the end, the siren sounded with the minor premiers winning by 38 points. McGuire was a standout at both ends, with Aimee Ralph, Gelmi and Osborne being steadfast back there. Cain was also instrumental, whilst the work of Edgley and Anderson inside 50 and the run of East and Stribley was noticeable. The Lions looked to Dowrick, Corlett and Miller as their standouts, though Brown and Dodd both had some nice moments in the game.