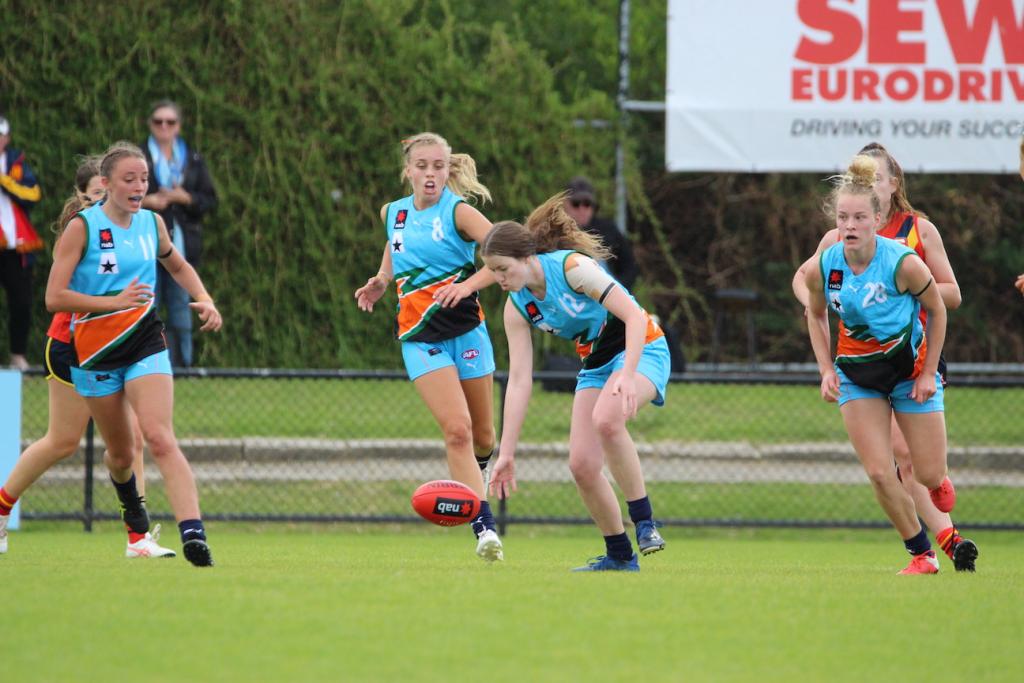 NO matter what challenge is thrown at her, Northern Territory’s Grace Mulvahil has taken them head-on. The talented Southern Districts teenager has been starring in the Northern Territory Football League (NTFL) Women’s Premier League, having dominated as a junior with an accolade-filled CV.

“I started playing for Crocs when I was about 10-years-old,” Mulvahil told Draft Central at the AFL Women’s Under 19 Championships when representing the Allies. “Got into that because my brother played there and my sister wanted to start playing and I’ve bene playing ever since then.

“I first represented the NT when I was 14-years-old and then been in the Thunder Academy and represented NT again at 15.”

Mulvahil won the best on ground in a NTFL Women’s Premier League Grand Final last year, becoming the second youngest ever winner, having only made her debut in Round 5 of the 2019/20 season. The youngster also won the NTFL’s Rising Star for her overall impact throughout that season and has continued her rise through the junior ranks.

Of her strengths, Mulvahil takes the game – like challenges – head on, and said her attack down the ground was her greatest strength, showing good athleticism to move the ball in transition. Her self-proclaimed improvements were her work rate and aerial skills as she looks to build a more all-round game.

Mulvahil, who represented Northern Territory Thunder in their win over the Greater Western Victoria (GWV) Rebels in the NAB League Girls, said that was a great experience for her and her teammates to come down to Victoria and win against a quality opponent.

“Yeah that was really good,” she said. “We all went in not knowing what to expect, how good the competition was, but we all played our part and won which was good.”

Adapting to different levels of competition has become part and parcel for Mulvahil, who is one of the Allies players thrown into a squad of talented footballers from not only the NT, but also NSW/ACT and Tasmania. With limited preparation as a group, Mulvahil enjoyed fast-tracking the get-to-know-you process and running out on the field.

“Yeah it’s been a good learning experience, just getting to know girls straight away and playing with them after three days of training,” she said.

The Allies ended up defeating South Australia in a thrilling end to the short carnival, and Mulvahil averaged the 10.5 disposals, 2.0 marks and 3.5 tackles, playing on the outside. At 172cm, Mulvahil is a good size to move well around the ground and can play just about anywhere from half-back to half-forward and through the midfield.

Whilst she admits getting drafted into the AFL Women’s would be “pretty good”, she has enjoyed stepping up through the levels and looking up to the likes of Zach Merrett whom Mulvahil said is one of her favourite players. Additionally, she said a couple of leaders at Southern Districts have also shown her the ropes coming through the NTFL club.

“Rhi Busch and Lala (Lateesha) Jeffery they both have been mentors at the club for me, stepping up into Premier League over the past two seasons,” Mulvahil said.

Whatever the future holds for the Top End teenager, there is little doubt she has come a long way and has not been afraid to adapt to any situation.