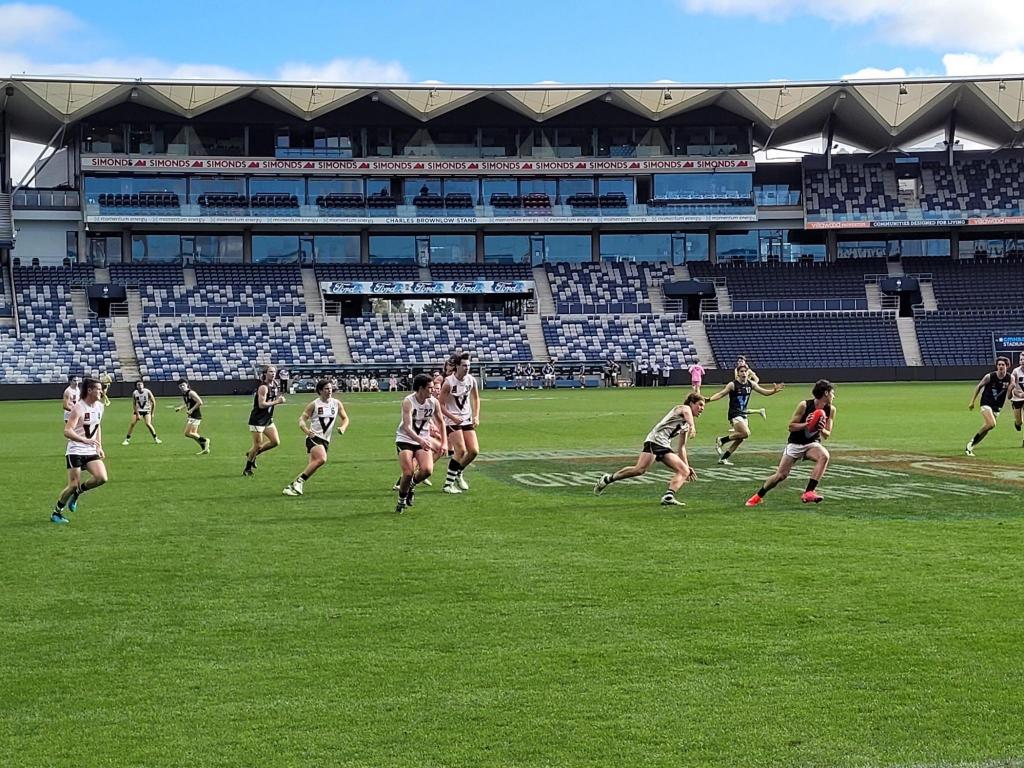 VIC METRO piled on the last seven goals of the game to kick away from Vic Country, winning by 34 points in their AFL Under 17 National Championship opener at GMHBA Stadium. The visitors were tested as Country snuck ahead during the second term, but Metro had all the answers to kick off their campaign on the right note.

Metro made the better start, with its brigade of classy ball winners getting to work and setting their side on the front foot. Evasive Sandringham Dragons forward Harry Sheezel made the territory count, snapping home the game’s opening goal with class. The middle of the term was owned by Country, who got on top via back-to-back Brayden George majors, as the Murray product proved troublesome with his aerial play. Metro tall Matthew Jefferson gave the visitors a quarter time lead, making good on his second set shot to edge ahead by two points at the first break.

Brisbane fans would have enjoyed the opening major in term two, as father-son prospect Will Ashcroft slammed home a terrific goal from the elbow of Metro’s forward 50. The buffer remained intact throughout a short stalemate, until Ned Moodie snuck forward to mark uncontested and hit back for Country. The goal-for-goal trend continued, with majors to Sheezel and Zane Duursma at either end seeing the margin remain identical at the main break, with Metro two points to the good.

While an icy Geelong breeze wafted across GMHBA Stadium, the action heated up with a flurry of early goals after half time. Noah Long rose inside 50 and put Country ahead, kicking the first of three goals within four minutes. A 10-minute lull followed, before Metro sparked to life with three late goals to retake the lead, sparked by Elijah Tsatas’ effort on the run. The gap was out to eight points with the last lot of 23 minutes to play, thanks to Sheezel’s third major just before the three quarter time siren.

Carrying on their third quarter momentum, Metro inflicted a shutout to finish the game, adding four goals to Country’s nil. George Wardlaw was one to lift in the second half, and got Metro running once again with a classy conversion on the move. North Melbourne father-son hopeful Cooper Harvey also popped up for a couple of late scoreboard contributions, while Ashcroft sealed his best afield performance with a second goal.

While Ashcroft was the most consistent performer across the day, Wardlaw lifted during the second half and skipper Blake Drury worked hard to round out Metro’s midfield mix. Tsatas was another to exert some of his pace and skill after half time on the wing, while Sheezel finished with a game-high three goals as the game’s most productive forward.

Long and Jhye Clark battled hard through midfield for Country, eventually joined at the centre bounces by Oliver Hollands. Big man Harvey Howe was dominant in the ruck battle, and Harley Reid had his moments playing off half-back as Country returned a solid team spread overall.

Both sides will be back in action for Round 2 up in Queensland on July 6, with Vic Metro taking on fellow Round 1 victors South Australia, while Western Australia will be Country’s opponent at Metricon Stadium.