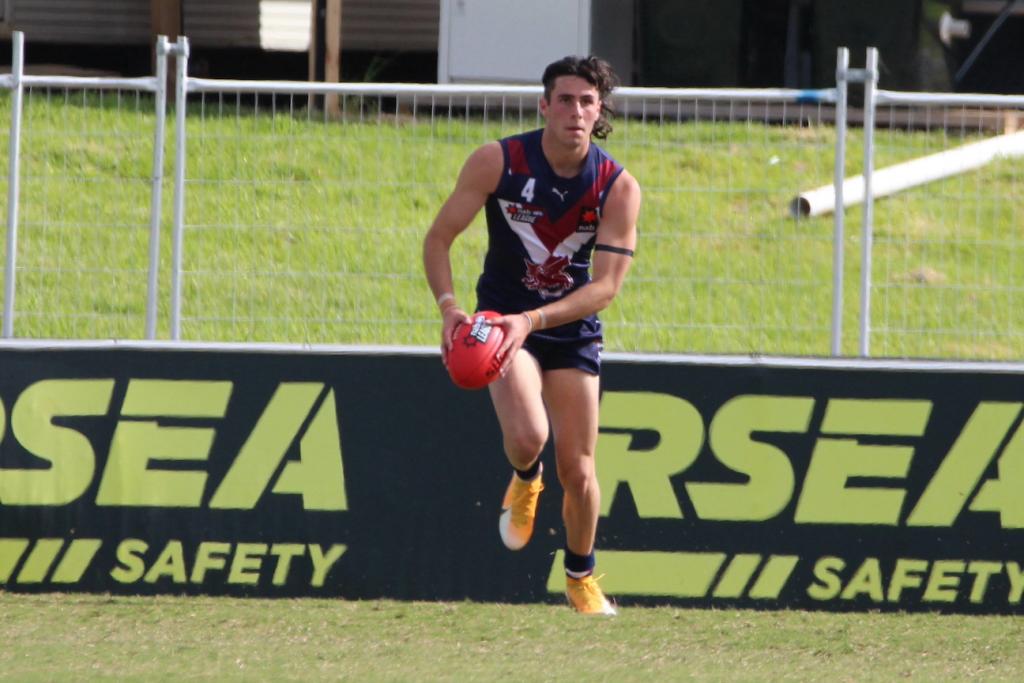 THE NAB League regular season enters double digits this weekend, with Round 10 offering up five fixtures across Saturday and Sunday. While plenty of top end talent will be observed at the Under 19 Victorian trials and Country-Metro Under 17 clash, a solid core of talent remains among the elite talent pathway. Debutants continue to filter through, and more established talent will also get a chance to shine in greater roles.

A much different looking rematch kicks off the round’s action, as Sandringham and Oakleigh do battle at RSEA Park for the second time this season. Both sides are set to field sides with hosts of changes, as up to eight Dragons debutants enter the fold. Among them, Hugo Hall-Kahan has been a standout for Haileybury College, while Charlie Clarke‘s local form for Port Melbourne Colts sees him earn a NAB League berth.

The home side is also set to be bolstered by the return of co-captain Josh Sinn, who has shaken off a hamstring strain. Fellow first round prospect Campbell Chesser is said to be another week away. Sandringham’s midfield will feature the likes of Lachlan Benton and Charlie McKay, under the ruckmanship of St Kilda mid-season recruit Max Heath. Up either end, 20th-year players Felix Flockart and Jesse Castan fill out the spine.

Charlie Clarke has been comprehensively tearing senior teams apart in the SFNL this season, matching it with bigger and more physical opponents without issue, one to watch for sure https://t.co/Y2e4GsLnhP

Oakleigh’s midfield will also be full of experience, with top-agers Lochlan Jenkins and Sam Collins poised for a permanent run. Collins, a Tasmanian who debuted for Oakleigh last week, is also familiar to the half-back role and even started up forward in Round 9. Greater Western Sydney (GWS) Academy and Allies squad member Patrick Voss is another to watch for Oakleigh, as he continues his defensive apprenticeship.

Northern Knights take on Calder Cannons at Preston City Oval in a second all-metro clash for the day, with a number of club-aligned players set to feature across either team. Jackson Archer (son of Glenn) will again line up in the Knights’ defence, alongside Carlton Next Generation Academy (NGA) hopeful Regan Uwandu. Blues fans can also look out for father-son eligible pair Tom Gleeson (Adrian) and Dane Whitnall (Lance) for Calder.

Essendon has a few potential academy and father-son prospects to monitor, all on the Cannons’ side. Bottom-ager NGA pair Carlos Egan and Reuben Rode get a crack at Under 19s level, while Josh Misiti returns to the fold after making his debut in Round 1 and featuring thrice. The likes of Sam Clohesy and Jack Rossimel are handy types who were overlooked for trial duties, while bottom-agers Caleb Burquest and Josh Hamilton should enjoy a few tussles in midfield.

Western Jets and Eastern Ranges round out Saturday’s action, locking horns at Downer Oval. Fresh off honours in the cricketing realm, Jets leader Billy Cootee will line up in midfield, potentially across from Ranges skipper Josh Clarke, who plays his second game for the season. Geelong-listed rookie Paul Tsapatolis is back in the ruck for the hosts, while Sahaf Ali is one to watch up forward for the Ranges after a promising debut last week.

Proceedings head down to Tasmania on Sunday as the Devils host Dandenong in Launceston, with the Stingrays hit hard by the weekend’s representative fixtures. Fresh off a 97-point triumph in Round 9, the visitors will be heavily rotated coming into this clash. The Devils’ side featured Allies squad members Baker Smith (centre half-back) and Jye Menzie (half-forward), the latter of which was best afield for his side last time out.

Seeing out the weekend’s play, Bendigo battles with Murray in Echuca, making for a replay of their Round 7 meeting. The Pioneers are set to unleash Max Dow, the third brother to enter through the NAB League pathway. NSW-ACT Under 17 squad members Jason Gillbee and Jedd Longmire will line up on opposite sides, while solid draft eligible players also remain.

Budding Allies representatives Charlie Byrne, Ryan Eyers, Cameron McLeod, and Toby Murray will all feature for the Bushrangers, while Essendon VFL-experienced pair Jack Hickman and Jack Evans should bolster Bendigo on either side of midfield.

Country regions Geelong, Gippsland, and Greater Western Victoria all have byes this round.