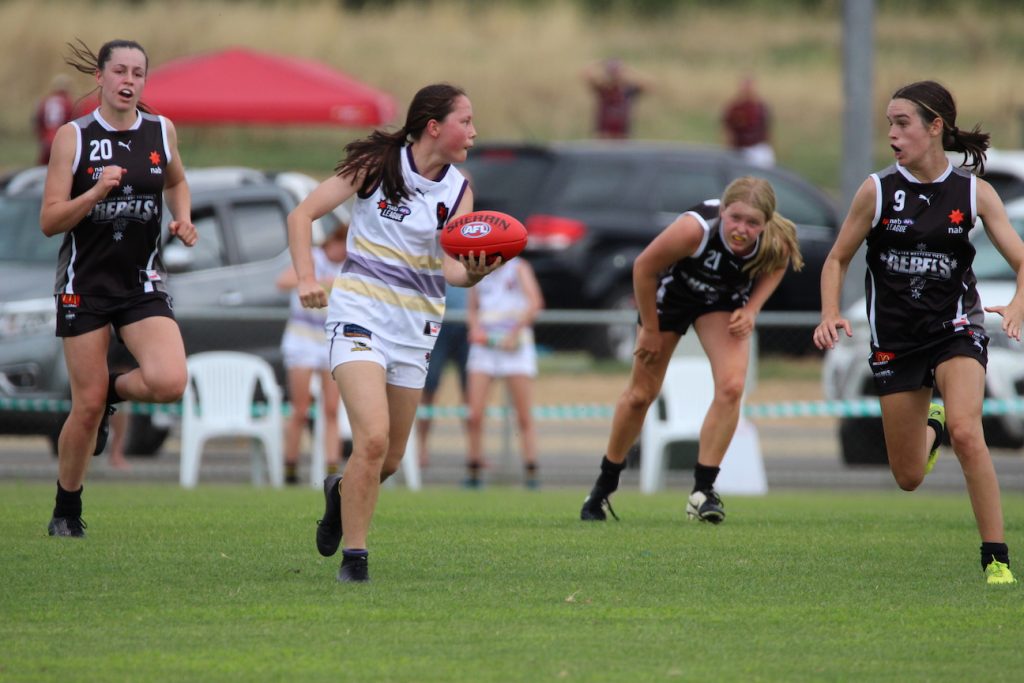 MATHEMATICALLY every game in the final round of the Victorian Football League (VFL) Women’s season has some bearing on the makeup of the top six. What is certain, is the top four teams are locked in – realistically top five but we are just “mathematically” speaking – with the sixth spot to be determined. Barring massive 20-goal-plus wins to Carlton or North Melbourne – or double that for Essendon to lose, then it will realistically be the Saints or Dogs filling out the last spot on the table.

Opening up the round is a game that has the potential for Essendon to host a final if they win by enough and the Western Bulldogs take care of Casey Demons, coming up against Darebin Falcons. The last placed Falcons will take home the wooden spoon barring a massive win over the Bombers, but Essendon will be keen to head into finals with a full head of steam. Georgie Prespakis returns for the Bombers in what will be a Calder-flavoured team, as the young Cannons are spread across the field. Tahlia Gillard and Kasey Lennox are named up opposite ends, with Emelia Yassir also named onball. The Falcons have a Cannon of their own with Peppa Poultney named at centre half-forward and could go head-to-head with Lennox at some stage, whilst Trinity Mills and Mikayla Plunkett from the Northern Knights are in the side.

The top of the table clash might normally see the teams hold back a little because of the potential for a rematch, but there is plenty on the line with Port Melbourne capable of snatching Geelong’s second spot. Collingwood has won its third straight minor premiership, and will be looking for its second straight flag, having gone through the season thus far undefeated. The Cats have been mighty impressive themselves with a 10-3 record, with the first of those losses coming at the hands of the Magpies. That game was a thriller, and a return serve here would set up another clash next week for a spot in the VFL Women’s Grand Final, whilst a loss would open the door for Port Melbourne with the Borough likely to beat Hawthorn and grab the double chance. That means Geelong would have to fight in an elimination final against either Southern Saints or Western Bulldogs the next week. Collingwood has kept a relatively stable side, with Lauren Butler coming into the team, and Eliza James retaining her place in the Magpies squad. Olivia Meagher up forward and Matilda Zander are other crafty talents to keep an eye on, with Imogen Barnett likely to win the leading goalkicker, and Marla Neal in great form too The Cats have plenty of AFLW talent and are not taking any chances, whilst from a youth perspective, Chloe Leonard is in the side from GWV Rebels. The Cats midfield of Darcy Moloney, Bec Garin, Darcy Moloney and Sophie Van De Heuvel is one that will tackle the Pies well.

The task is simple for the Western Bulldogs, as with all potential mathematical possibilities, at the end of the day, they can put the pressure back on Southern Saints with a victory. The Saints will be favoured to beat North Melbourne the next day, but the stakes will be raised if the Bulldogs can knock off Casey Demons and temporarily take sixth spot. Not only that, but it also eliminates the more ridiculous 20-goal-plus wins that Carlton and even more-so North Melbourne would need in order to grab a top six spot. The Dogs win, they wait on the Saints, they lose and they are out of the running. The Western Bulldogs have retained GWV Rebels’ trio Nyakoat Dojiok, Tahlia Meier and Lilli Condon, with Western Jets’ Trinity Skenderis staying in the team. Brooke Hards has been named in the back pocket returning to the last line again, whilst the Bulldogs have a star-studded midfield of Elisabeth Georgostathis, Isabelle Pritchard, Britney Gutknecht and Jess Fitzgerald. The Demons have their ball-winning talents in Eliza West and Megan Fitzsimon, with Grace Matser getting another crack against an experienced ruck, whilst Alyssa Bannan and potential leading goalkicker Imogen Milford line-up in a strong forward line.

Port Melbourne will know if it can secure a top two spot by the time the Borough take the field on Sunday. If the Magpies have knocked off the Cats, then a win will see them grab second spot and the right to face the Magpies next week in a qualifying final. If the Cats win, the percentage difference is too great to make up, and Port will finish third, win, loss or draw. Though a defeat against bottom four side Hawthorn will not be great for the confidence heading into the post-season series. The Hawks might not have finals on the line, but have plenty of motivation with Meg Hutchins playing her final game, retiring at the end of the season after an illustrious career. The Hawks have a great percentage, so a win and losses to Carlton and North Melbourne will see the brown and gold overtake both sides and slot into eighth. Hawthorn continue to back in some great Eastern Ranges talent, with Cadhla Schmidli, Bridget Deed, Keeley Sherar, Eloise Chaston, Sarah Humm and Jess Grace named in the team, as is Gippsland Power’s Grace McRae for the Hawks’ final game of the season. Port Melbourne has handed Murray Bushrangers’ Aurora Smith a debut, running out alongside three other classy talents in Jaide Anthony, Amanda Ling and Brooke Vickers.

All eyes will be on this game if the Western Bulldogs do upset Casey Demons on Saturday, with all on the line for the Southern Saints. A loss, and it is curtains on the finals series, whilst a win would see them retake sixth spot and play finals. However if the Bulldogs do lose, then the Saints are all but home, barring the Kangaroos handing them an absolute shellacking, where North or slightly more likely Carlton, could take sixth spot. Realistically though barring apocalyptic type winning margins, it’s the Dogs or Saints for sixth spot. Southern Saints have named their trio of AFLW Draft hopefuls in Sandringham Dragons duo Emma Stuber and Pia Staltari, and Dandenong Stingrays’ defender Jemma Radford. With plenty of talent across the field, the Saints will be looking to capitalise against the Roos. North Melbourne has been able to welcome back Sarah Skinner to the fold, lining up at full-forward with Meagan Kiely looking to take control through the midfield, and the sister act in Jayde and Alexia Hamilton hoping to have an impact in the game.

Carlton will be favoured to finish off the season in style, and the Blues will overtake Western Bulldogs in seventh with a win. Mathematically the Blues can play finals with a huge 20-odd-goal turn around compared to the Southern Saints, though realistically the percentage gap is a bridge too far. Winning and ending the season on a high will be something to take into the off-season for the Navy Blues, whilst Williamstown cannot move from eleventh barring a big loss and Darebin shocking Essendon the day before. Williamstown have named Geelong Falcons’ Zoe Garth for the Seagulls’ final game of the season, as the home team will still be without any GWS GIANTS AFLW assistance. Megan Williamson and Aimee Whelan will lead the midfield brigade, with Erin Meade a reliable rebounding talent from defence. The Blues have Northern Knights duo Maeve Chaplin and Tarrah Delgado in the team once again, with Amber Micallef, Ally Bild and Akayla Peterson forming a strong defence.