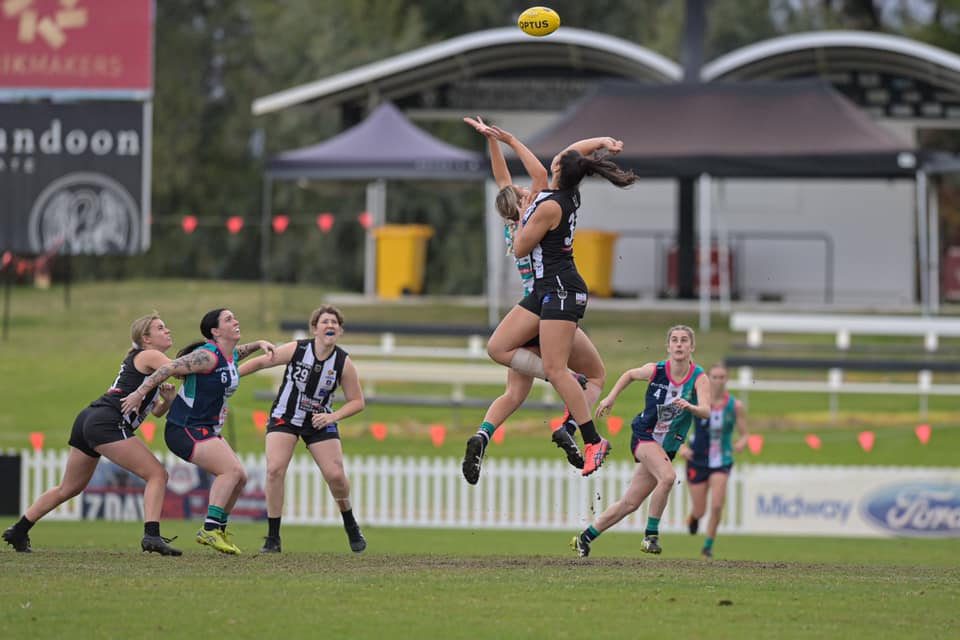 WEEK one of the West Australian Football League (WAFL) Women’s finals series was done and run over the weekend, and we took a look at a few of the players who received AFL Womens’ Draft Combine invites that caught the eye, particularly focusing on a mix of AFL Women’s Draft Combine invites and State Academy members, including those Under 17s. Here’s a selection of top performers with the notes opinion of the individual author.

Stribley started the game with a strong run and carry along the right side of the wing with a quick kick inside their 50m. Third quarter we saw the speedy winger using her footy smarts making her way into their 50m that resulted in kicking a point but from smart play to try and snap it across her body.

A strong tackling inside midfielder, puts her head down in ball ups and tries to win it, fast when on her feet and can easily burst through packs. Throughout the game she showed off her clean hands to be able to distribute from the inside to the outside and keep the ball moving in transition. Whilst she has had bigger games, it is hard not to notice the talented midfielder who played her first WAFL Women’s final with her speed and toughness at the contest.

Outstanding hard tackler that brought almost every opponent to the ground, but is as fair as they come, a very respectful player against her opponents. She got caught high at one stage inside 50 and had a set shot on goal, but like her teammates uncharacteristically missed the set shot. Still applied good pressure when near the ball carrier.

The 186cm talent dominated the ruck with her tall vertical leap that was able to punch the ball forward giving the midfielders more of a chance to win it clearly out of the centre. Whilst being tall, Lakay was also very handy at ground level where she was able to hit it and make a contest if it did not go her team’s way.

A young talent with plenty of upside, Taylor has certainly caught the eye this year in the WAFL Women’s. Against Peel Thunder, Taylor showcased that she is a lovely mark and a great right footer who can hit targets with ease going forward.

Good use of space where she can control both sides of the ground playing through the midfield. Using her endurance to be everywhere the ball is, her ability to keep working hard throughout the match a major key factor for herself and her team. One to watch for the future.

There were a number of plays that showed how Roberts is a smart footballer. She won a free kick and popped it to her teammate on top of their 50m. Her first, second and third efforts inside their 50m trying to win the ball to have a shot at scoring, picked up the ball cleanly in their 50m with 30 seconds left in the first term, hands it off out in front with Katie Jayne Grieve running past who gets the hands and kicks their only goal for both sides in the first quarter. Early in the second term, Roberts got tackled whilst being able to hold herself up and bangs it on the boot close to the flank of their 50m and gives her team a scoring opportunity. Whilst she was not able to have the huge numbers she has had in the past due to being carefully watched, she still stood out with another impressive games.

First quarter a free kick went to Wright who has a great penetrating kick and was able to pop it on the top of a group of her teammate’s heads. Whilst not a huge ball-winner, Wright is a pressure player who continues to look dangerous inside 50.

The crafty forward who kicked a couple of goals last week early might not have had the same going in this game, but the wet conditions made life difficult for the left-footer. She set the tone early with a hard lead in the match, and had to work up to half-back in order to get near the ball as Subiaco dominated the early stages. A late 50m penalty in the first term almost cost her side but it was luckily only one behind. Her second quarter was more promising to start with, as she cleanly scooped it off the deck to open up inside 50, then missed a set shot from a tight angle which went to the left for one behind. She had another snap in the third term off a good one-two inside 50 but her snap also just missed. Taking a strong mark inside 50 midway through the third term, Doumanis was close to the boundary line but opted to pass off and it just fell short with the defence onto it, spoiling it away. She had another quick kick inside 50 late in the game but could only just get her boot to it due to the pressure.

Having to wait up the opposite end to the ball in the first term, Franklin still had a clever tap in the opening quarter after being under pressure leading up to half-back, using good footy nous to not take possession and give her teammates a chance to run onto it. Her second quarter started with a bang, kicking a goal two and a half minutes into the term after nudging her opponent under the ball well in the one-on-one and running into an open goal. Midway through the term, Franklin was thrown into the ruck, where she spent substantial time throughout the game doing so, then when she went forward fared alright, matching up well with Caitlin Walker. She got caught behind her opponent early in the third term, but then got in front for a flying attempt she could not quite bring down in the quarter, then did a similar thing early in the fourth term only to be spoiled. She won a free kick late in the game and hit up Kate Orme well. Overall an okay game but not favourable to tall forwards.

Kept her opponents in check which is all you can expect of a key defender. Did not need to win much of the ball, going for a big fly at half-back midway through the opening term, and then applying good defensive pressure in the back half. She chopped out in the ruck occasionally, and whilst she only had a few featuring moments, she was always roaming around ready to present for her teammates.