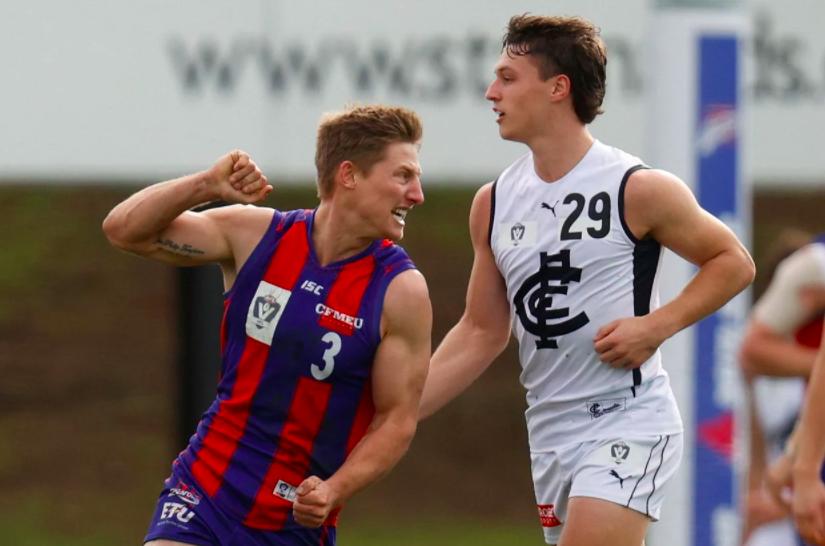 THE 2021 Victorian Football League (VFL) season rolled on into its 10th round over the weekend, with eight fixtures spread from Friday evening to Sunday afternoon, as Victorian sides returned to the fold. There were a number of outstanding individual performances among the Round 10 action, as AFL-listed talent and state league guns alike topped a range of key categories. We take a look at this week’s stat leaders, as well as the season tallies to this point.

Port Melbourne midfielder Eli Templeton dominated proceedings in Round 10, collecting round highs of 49 disposals and 31 kicks in the Borough’s loss to Carlton on Saturday afternoon. On the winning side, another former AFL-listed on-baller, Tom North notched up 14 marks as the Blues took home a full set of premiership points away from home. Western Bulldogs-listed key forward Josh Schache also clunked 14 marks, in his six-goal outing against Geelong.

Southport’s 107-point thumping of Brisbane saw a number of Sharks lurk on the stats sheet, led by Billy Gowers‘ eight goals. Jordan Dawson, who leads the competition for disposals and handballs, distributed the most of anyone by hand with 25 handballs. In the other Queensland-based game, Darcy Macpherson got his hands dirty for Gold Coast by laying a high of 14 tackles.

The league’s bigmen also proved prominent in Round 10, led by substantial efforts from Jack Berry (Frankston) and Matthew Lobbe (Werribee) in the ruck. Both men won 42 hitouts as their sides earned victories. Lobbe is yet another former-AFL product to be racking up big numbers, and he currently leads the competition for hitouts after another strong showing. Teammate Dom Brew remains top for tackles with an average of 10.2, with Queenslanders making up the remaining stat leaders overall.

Find the full list of Round 10, and 2021 season stat leaders below.