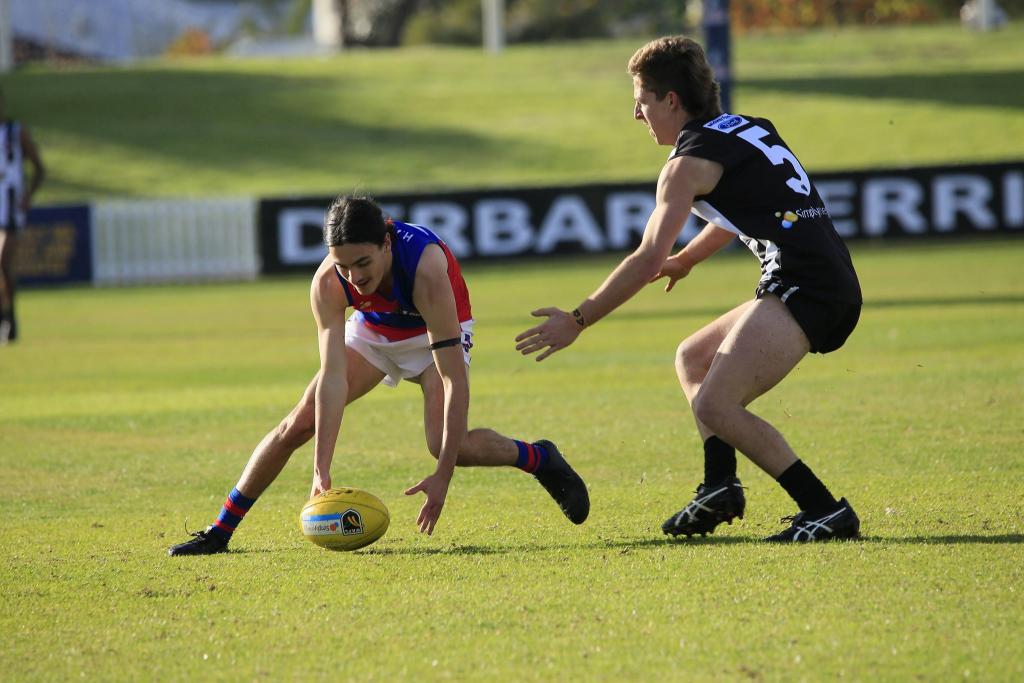 SWAN Districts moved to the top of the WAFL Colts ladder on Saturday morning with an imposing 51-point win over West Perth at Steel Blue Oval. The Swans were tested early, but overcame the Falcons’ pressure game to break down the walls of their defence, booting four goals to nil in a defining third quarter. The victors’ midfield mix and small forwards eventually took a toll, bringing a touch of class to the scrappy encounter and deservedly improving to 7-1 on the season.

We take a look at a few of the top performers from either side in our Scouting Notes, and go around the grounds with some of the other outstanding Colts performances out of Round 11.

Usually a player who can accumulate possessions around the ground, Chipper found a lot of his 24 disposals at the stoppages on Saturday. As a constant in midfield for the Swans, his key method during the first half was to dish out quick handballs from the clinches, with a lot of work done under pressure. While he was a touch rushed at times, Chipper managed to better utilise his running power after half time as the game opened up and he was afforded more time and space. It was not the Swans midfielder’s most dominant outing, but he managed to tick over the numbers and get involved when called upon.

Another of the Swans’ midfield mainstays, Hewett was a lot more kick friendly and won plenty of the ball with a total of 25 disposals and five marks. He struggled at times in the first half with cleanly exiting the contest, but managed to find more space to smoothly run and carry as the game wore on. Hewett also impacted while resting forward, booting two goals. His first came in the second term, sliding for a mark before quickly wheeling around to slot the goal, and his second came during the following period with a nice steady and finish on the move.

Among the Swans’ starting centre bounce mix, Cartwright started the game on the right foot by winning the opening clearance. He was often quite clean with his handling under pressure and that factor helped him contribute an equal game-high 26 disposals. He managed to sneak forward and snare an opportunistic soccer goal in the second term, before dropping back and helping the Swans chain some rebounding passages together in the latter stages of the game.

Initially stationed up forward, Metcalf proved a dangerous member of the attacking 50 with his speed and willingness to create openings around goal. He was then thrown into the centre bounces and was able to contribute to transitional passages in general play, again using his run to chain possessions together. Metcalf slammed home a terrific long goal in the second quarter after baulking an opponent, and got a much easier one in the third as he broke over the back.

Somewhat of a burst player in the West Perth lineup, Dixon was able to showcase his explosiveness and attacking intent throughout this outing. He rotated through midfield from the forwardline and looked powerful at the contest, looking to bustle clear with strength and pump his side forward with long kicks. While some of his handling and ball use was impacted by pressure, Dixon was able to get good separation when stationed inside 50. He marked on the lead twice during term three, but could not make good on the resultant shots, finishing with 19 disposals, five marks, five inside 50s, and two behinds.

One of the many West Perth defenders who absorbed a heap of pressure, Dimanlig was a solid presence among the under-siege Falcons backline. He was a reliable outlet when his side looked to work openings out of defensive 50, contributing to the kick-mark play and using the ball relatively cleanly in a no fuss kind of manner. Dimanlig also showed promising intercept ability, spoiling and marking against his direct opponent or when manning territory. He finished with good numbers of 19 disposals and seven marks.

The round’s only other Colts clash saw East Fremantle comfortably get past Perth, defeating the Demons by 91 points at Mineral Resources Park. The Sharks piled on 10 goals to two after half time to consolidate the win, with a number of big names faring well.

In the League clash between those two sides, also won by the Sharks, a couple of Under 19 state squad members showed their wares. Jack Avery was kept busy in Perth colours, claiming seven marks among his 18 disposals, while Finn Gorringe had 10 touches for the Sharks.