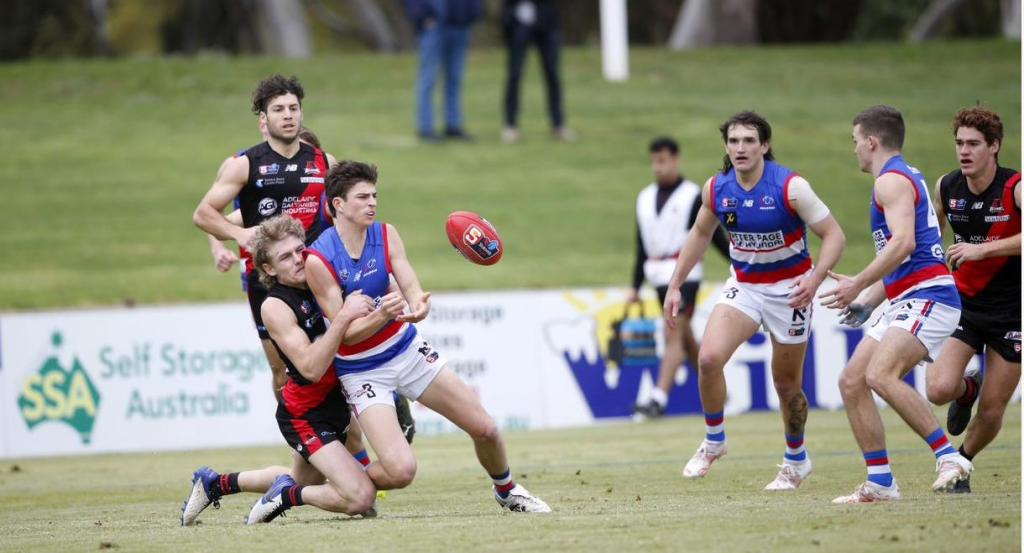 CENTRAL District midfielder Shay Linke has enjoyed a successful 2021 season to date, proving a class above Under 18s level and earning a call-up to the club’s reserves side. A product of the Tanunda Football Club in the heartland of South Australia’s Barossa Valley, Linke performed well against seasoned bodies at Reserves level and, last weekend, was selected to make his League debut with the Bulldogs.

A member of South Australia’s preliminary squad ahead of the Under 19 National Championships, Linke is regarded as one of the state’s top prospects. Standing at 190cm, the teenager boasts a tall frame which will likely make him an enticing prospect for scouts and recruiters. Throughout the season, Linke has used his height advantage to good effect in the air. Although he will need to add some muscle, Linke has displayed effective skills through the midfield and thoroughly deserved his call-up to league level.

In this week’s SANFL Player Focus, Draft Central analyses how he performed on debut.

Linke started the game at half-forward and didn’t have to wait long to encounter his first contest at League level, as the opening clearance of the game headed his way. Linke, being closely checked by West Adelaide’s Elliot Dunkin, contested the mark but the Bloods defender spoiled the ball to ground. Moments later, Linke roved well but was immediately brought to ground and the ball spilled loose. Despite being involved in a couple of early contests, the rangy utility won his first effective possession by receiving the handball from teammate Aiden Grace. He side-stepped a would-be Bloods tackler with some class and his long right-foot kick inside 50 fell perfectly for medium-forward Ethan East who marked but could not convert the set shot.

After a brief stint on the bench, Linke returned to the field to play a midfield role. He took possession of a loose ball in West Adelaide’s forward 50, however was instantly pounced upon. But at the subsequent stoppage he was able to fire out a quick and effective handball after a clean ground ball pick-up. He looks a great size and was just about the tallest midfielder on the field. After moving back to half-forward, Linke gathered on the 50-metre arc but again found himself with little time or space and was tackled and forced to shoot an errant handball off to avoid being caught holding the ball.

In the latter stages of the first term, Linke attended his first centre bounce and made a impact, laying a strong tackle on Lachlan Squire who was forced to leave the field with a bloodied nose. The debutant finished his busy start to the game by taking an uncontested mark in defence and dishing off a quick handball to a running teammate just before the quarter time siren sounded.

Linke began the second term from the bench at X Convenience Oval but moved into the centre bounce at the six-minute mark. Deep in the Bloods’ forward 50, he found himself in the right spot to collect the handball and quickly hack it out of the danger zone. The kick, although not graceful by any means, managed to calm things down momentarily for the Bulldogs. At the opposite end of the ground he laid another very strong tackle to ground Bloods captain Tom Keough.

As half-time approached, Linke found himself in a patch of space in the middle of the ground and was spotted by a teammate. He took the simple uncontested mark and followed up with a clean, short kick as the Bulldogs looked to generate some forward movement. He didn’t get his hands on the ball as often in the second term but fought hard at ground level and tackled with real intent and ferocity.

After the half-time break, Linke spent the early stages of the third term on the bench or across the half-forward line. Senior coach Paul Thomas rotated Linke through the centre bounce in order to get his hands on the ball, but it was his hustle and defensive pressure which was on show again. Seasoned West Adelaide on-baller Kaine Stevens managed to evade Linke at a forwardline stoppage and kick a classy goal, but the Bulldogs teenager will learn plenty from lining up on the Bloods premiere midfielder.

Linke’s tackling again featured in consecutive stoppages as the teenager appeared eager to physically immerse himself in the contest on debut. Minutes before the final change, the Tanunda teenager picked up another simple mark and kick after spreading wide from the centre bounce.

It took Linke a while to get onto the field in the final quarter, but when he did he rushed straight into a stoppage on the wing. The utility again found himself under a heap of pressure when he gathered the ball deep in defence and was forced to cough up the handball. At the 12-minute mark Linke copped a big hip-and-shoulder but fortunately for the Bulldogs, the ball fell into safe hands after being comprehensively knocked from the teenagers grasp. To his credit, Linke bounced straight back up after the heavy collision. Later, he couldn’t quite pick up a loose ball near the boundary line but recovered well to lay another solid tackle. As the game entered its closing stages, Linke won a holding free kick and opted for the safe kick down the line.

Shay Linke performed well on debut for Central District in their 18-point win over West Adelaide. He split his time between an inside midfield role and the half-forward flank and didn’t look overawed by the occasion. Linke was particularly involved in the first quarter as both sides struggled to hit the scoreboard early on. Although slim, Linke threw himself at the contest and tackled strongly. He managed to spread from the contest and found some space at-times to accumulate uncontested possessions, however most of his work was done at the coalface. Due to the nature of the role, Linke often found himself under immediate pressure after gaining possession which impacted his ball use. Overall, Linke produced a solid showing and will certainly have benefitted from the opportunity to rub shoulders with seasoned SANFL campaigners.