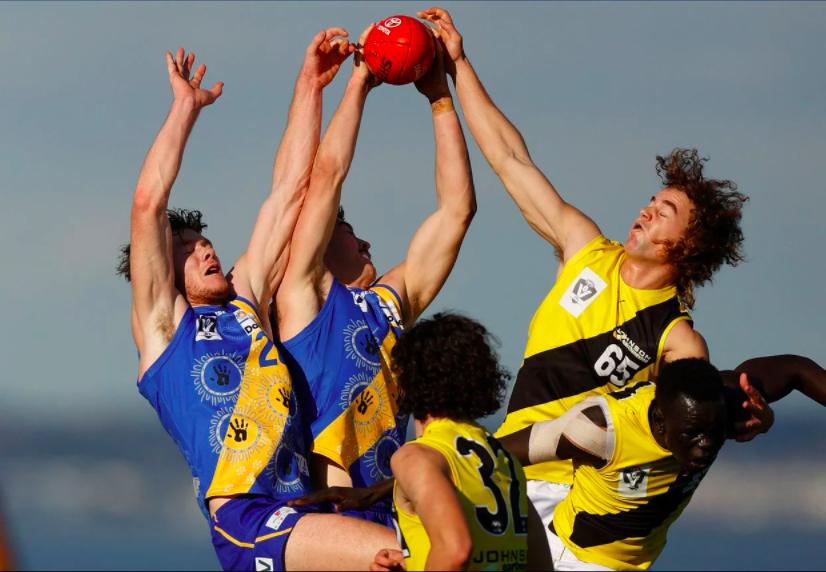 POST-SIREN drama capped off a memorable Grand Final rematch in the VFL this weekend, as Victorian sides returned to the fold. While South and West Australian fans took in slightly condensed fixtures, it was business as usual in Tasmania as a new all-time games record was achieved. We run you through all the results and outstanding performances in this week’s state league wrap.

A draw in Sunday’s 2019 Grand Final replay between Richmond and Williamstown highlighted Round 10’s action, with post-siren drama ensuring the rulebook was given a workout. Gun Seagull Mitch Hibberd sent a 50m free kick to the line which was initially slapped down by Richmond’s Garrett McDonough, only for Williamstown captain Adam Marcon to punch it back through the behinds. But given the final siren had sounded, Marcon’s touch was void and scored were left locked at 74 points apiece.

There were two other games decided by a goal or less, both occurring on Saturday. North Melbourne snared its second win of the season in a three-point thriller against Coburg, doing just enough in term four after scores were tied at three-quarter time. Ben Speight‘s fourth major came with just over two minutes left, putting the Roos back ahead for the game’s decisive lead change.

Gold Coast claimed victory in the day’s second thriller, coming back from 41 points down at half time to edge Aspley by one straight kick in a Graham Road Oval shootout. Competition leading goalkicker Matthew Hammelmann snared another six majors for the Hornets, while Josh Corbett (five goals) and Ben Ainsworth (four) proved impactful for the Suns. Table topper, Southport also won out on Saturday, thumping the Brisbane Lions by 107 points as Billy Gowers took full toll of the Sharks’ midfield domination with eight goals.

In the round’s sole top four clash, Footscray kept its perfect record in tact with a 33-point triumph over Geelong on the road. The Bulldogs were spearheaded by Josh Schache‘s six goals, with Patrick Lipinski (36 disposals, three goals) was also dominant. Frankston snuck into the top eight with a 29-point win over Northern Bullants, with Mitch Cox (28 disposals, five goals) and Josh Begley (25 and three) waxing nicely. Carlton, Werribee, Box Hill were the other sides to register Round 10 wins, with the latter two sitting clear in the top eight.

Only two games were played in Round 11 of the SANFL, with Central District and Sturt kicking out to wins which see them move clear of the ladder’s bottom rung. Nicholas Gillard stepped up to boot half of Centrals’ goals (five) in their win over West Adelaide on Saturday, with the Bulldogs maintaining a three-goal buffer at each of the final three breaks. Travis and Jarrod Schiller combined for 52 disposals in red, white and blue, while Shay Linke notched 12 touches on his League debut. Elliot Dunkin racked up a game-high 35 touches for Westies, aided well by the reliable Kaine Stevens (31 disposals, one goal) and Thomas Keough (21 and two).

Meanwhile, Sturt snapped a four-game losing run to also claim its third win of the season, downing Port Adelaide by 41 points on Sunday. Senior-listed forward Dylan Williams booted six of Port’s seven goals in the loss, with skipper Cam Sutcliffe bagging the other major on his return. Joshua Hone snagged three for the Double Blues, who had a much more even spread of 11 individual goalkickers. Tom Lewis topped their disposal charts, collecting 26 en route to victory – only outdone by Port’s Sam Mayes (27).

Launceston marked a record-breaking weekend of TSL football in style, thumping Glenorchy by 113 points on Saturday to move clear atop the table. The Blues were celebrating Jay Blackberry taking over the league’s games record, running out for the 213th time to move past former Magpies stalwart, Jaye Bowden. Blackberry marked the occasion with two goals, while competition leader Dylan Riley bagged five in another standout forward display.

Tigers also picked up a significant win among the top four picture, setting up a handy buffer to weekend opponent, Clarence on Saturday. The result was all but wrapped up by half time as Tigers led by 45 points on the back of nine goals to Clarence’s two, before the Roos claimed some consolation scores to see the final margin sit at 31 points. Marcus Gardner was adjudged best afield for the victors, contributing a game-high three goals.

Lauderdale was another side to create some separation in terms of ladder position, leaving North Hobart on the bottom rung after beating the Demons by 67 points away from home. The Bombers’ two wins in 2021 have both come against North Hobart, with this one set up by the goalkicking combination of Edward Stanley (five goals) and Harry Richmond (four). Full of confidence, Lauderdale will have to wait to perform again with its bye coming in Round 13.

Another condensed round of WAFL action saw three games played on Saturday, with away sides West Coast, West Perth, and East Fremantle all picking up valuable victories. The most remarkable of the lot went to West Coast, as the Eagles notched their first win for the season and spurned Subiaco’s quest to reclaim top spot in the process. Mark Hutchings (32 disposals, one goal) and Nathan Vardy (17 disposals, 26 hitouts, two goals) were terrific for the unlikely six-point victors, while Ben Sokol piled on six goals in an attempt to drag Subiaco over the line.

West Perth moved above Swan Districts with a 46-point win at Steel Blue Oval, in which the Falcons lead at every break. While the pair still sits clear among the top five, both East Fremantle and Perth are not far behind. The Sharks moved to within a game of the finals spots with their 26-point win over the Demons, overtaking their weekend rivals in the process. The race for finals qualification looms as a tight one with just under half of the regular season left to play.