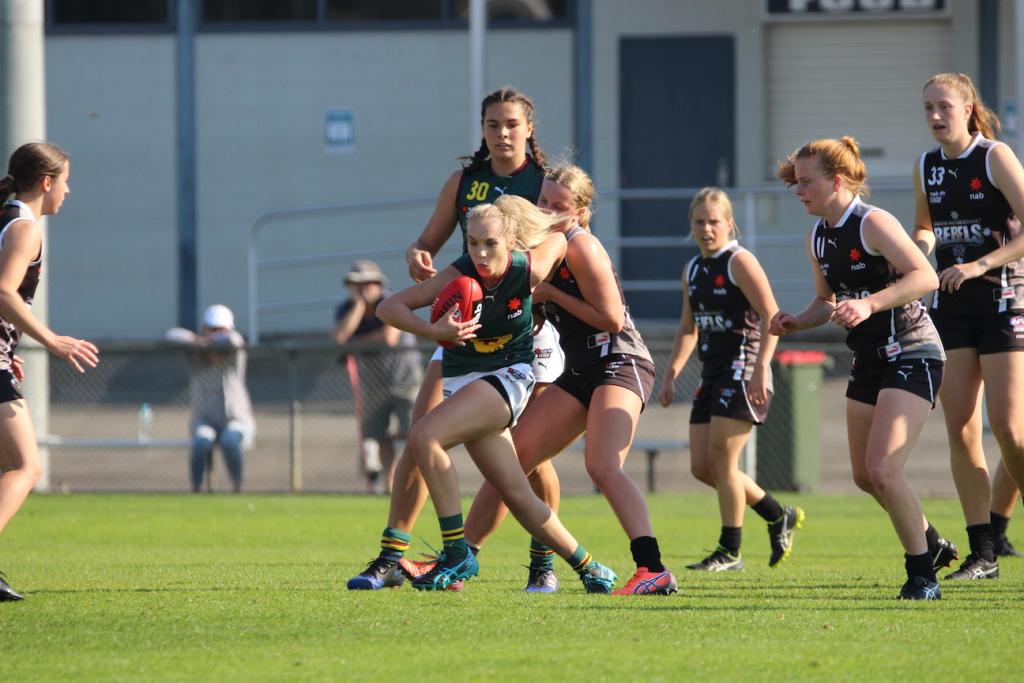 TASMANIAN Jemma Webster might be from a different sporting code to her now Australian rules football pathway, but it is not one you would expect – gymnastics. The former gymnast spent her childhood in the sport, then opted to transition into the oblong-shaped ball game and follow in the footsteps of her cousin, St Kilda’s Jimmy Webster.

“I was actually a gymnast for nine years then made the decision to go over to junior football at Claremont,” Webster said. “I played two years at junior level and then I made the transition to the state wide at Glenorchy and have played another two years there and now I’m in the state (team).”

Crossing from an individual sport like gymnastics, it was a change to be one small part of a big team, but something that Webster really enjoyed about football, along with the physicality that came packaged with the sport.

“The physicality is one of my main enjoyments of the game, especially coming from a gymnastics background, everything is different within the two sports but the teamwork as well,” Webster said. “Gymnastics is very individual sport so I love the enjoyment you get around the girls.”

Playing in a variety of roles, Webster said she is happy to slot in any of the three lines, but loves to run through the midfield or up forward. It helps with what she considers to be her strengths, which she named as her ground balls and contested work below the knees, as well as her ability to hit targets. As for her improvements, Webster said she was looking to improve her marking and confidence to be able to win more marks across the field.

Webster is one of a number of Tasmania Devils players who have come through the pathway, experienced the beltings on 2020 in the NAB League Girls, and come through the other side better for those losses. When asked what was the difference between the 2020 season and the incredible 2021 season – where they finished on top of the Vic Country/Tasmania pool, Webster said it was now former coach and Gold Coast Suns AFL Women’s senior coach Cameron Joyce.

“Our girls are very connected this season,” she said. “It’s hard because we’re in different states, but ‘Joycey’ really brought the team together and we had those Campbelltown sessions where we got to meet up and the connections I’ve built with the girls through this year have been amazing and something I’ll take along with me for the rest of my career.”

It is no surprise that Webster named her cousin Jimmy as her inspiration, and said he worked hard to reach the elite level, something she hopes to do long-term if it’s possible, but if not, then she just wants to develop into the best possible footballer she can and enjoy the ride that comes with it.

“I always wanted to play at the highest level I can, but just really enjoying the footy while I can,” Webster said.