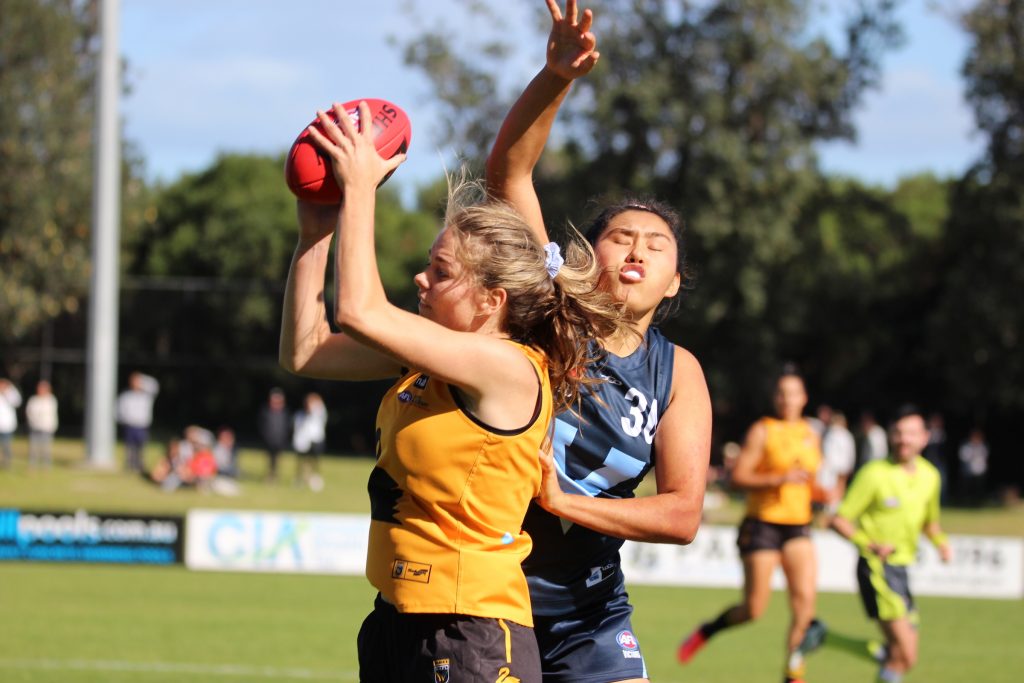 PEEL Thunder prospect Ella Roberts is already a well known quantity, establishing herself at senior level in the Thunder’s 2020 premiership side, and earning her state’s Most Valuable Player (MVP) award at this year’s Under 19 National Championships. The 16-year-old is already a good size at 175cm and boasts rare talent, able to excel as a forward target or on-ball with her athleticism and clean hands.

Roberts has again proven a key figure at WAFLW level for Peel in 2021, with her side on the eve of a finals campaign as the second-ranked side. She turned it on early and battled through a knock to claim 25 disposals and a goal in the Thunder’s most recent outing, a loss against Claremont. We put her impressive Round 15 performance under the Player Focus microscope.

Starting in the near-permanent forward post she dominated throughout the day, Roberts was in ominous form during the opening quarter. She pressed high up the ground to present as Peel’s centre half-forward, making the best of whatever service she received with wickedly clean hands at ground level and combative intent.

The 16-year-old’s ability to swoop on the ball at speed, especially off the deck, and grab it cleanly was outstanding early on. She tried to manufacture space upon gathering but when opponents were on her hammer, she released quick handballs to keep Peel moving forward via outsider runners.

Her kicking at speed was outstanding, booting numerous passes inside 50 to the advantage of her forwards, who could not quite snaffle up a series of marks. In the air, she judged the ball beautifully and recovered best to be first to the loose pill.

Roberts capped her wonderful individual quarter with a highlight-reel goal, chasing up her own pass inside 50 to mop up off the ground, side-step a defender and blast the ball home from 40m for her side’s opening major.

It was no coincidence that Roberts’ most productive term also saw the Thunder sneak ahead at the first break, though the lead proved only momentary. The youngster finished with 12 disposals (six kicks, six handballs), a bunch of inside 50s and a brilliant goal.

While she did not quite hit the heights of the previous quarter as Claremont began to get on top, Roberts still managed to move into all the right spots and compete with a magnificent air of confidence.

One of her best moments came at half-forward, where she sharked the ball from between a couple of less-assured Claremont defenders, before backing her pace and burning towards forward 50.

She was not afforded the same volume of opportunities in the front half, but still looked to link into attack and took her first mark of the day on the 50m arc, proving strong in the air despite heat from two opponents.

It is fair to say that Roberts was in the wars during the third quarter, battling a knock to her wrist in the closing stages.

She sustained it on the leap up to a marking contest on the wing, going down innocuously but looking in quite some pain and going off. Almost comically, she gave away an unlucky last touch free kick, bumped into an opponent, and smothered with the same hand shortly after.

In a show of her toughness, Roberts rose for a nice overhead mark late in the term having introduced that part of her game to the contest earlier on.

While indifferent delivery, heavy pressure and perhaps fatigue hindered Roberts clean handling, she did produce one outstanding passage with a swift gather and precise pass at full tilt, hitting a teammate inside 50.

Roberts finished with three disposals (all kicks), including two marks and two inside 50s, proving she can be productive with limited looks.

Roberts battled on to run out the game strongly, even earning a late run through midfield. With the result still up for grabs, she looked to make things happen but was caught for a rare holding the ball free kick against, in the early stages.

Still, she carried great intent until the final siren, with her desperate run-down tackle on a breaking Mhicca Carter showing just that.

From that moment, Roberts became more prominent around the contest as she moved into the on-ball division, trying to use the ball positively and get creative with her movement.

Her lone centre bounce attendance came in the second-last minute, and Roberts rounded out a trying performance by adding six disposals (four kicks, two handballs) and a couple of tackles.

It is crazy to think that Roberts is still a year away from being draft eligible, and that she still has so much development left in her as a December birth. The 16-year-old can produce truly special moments and did so in this match, with her first term feats making for must-watch football. Her one-grab ability bodes well for more midfield time, though she is also so effective as a forward target who can not only crash packs and clunk marks, but be the first to recover the ground ball. From there, her smooth coverage of the ground and unbelievably slick use by foot at full tilt is elite. With so many plaudits already and unbelievable confidence at senior level, Roberts is a class above her peers at the moment as the best prospect in next year’s draft pool.