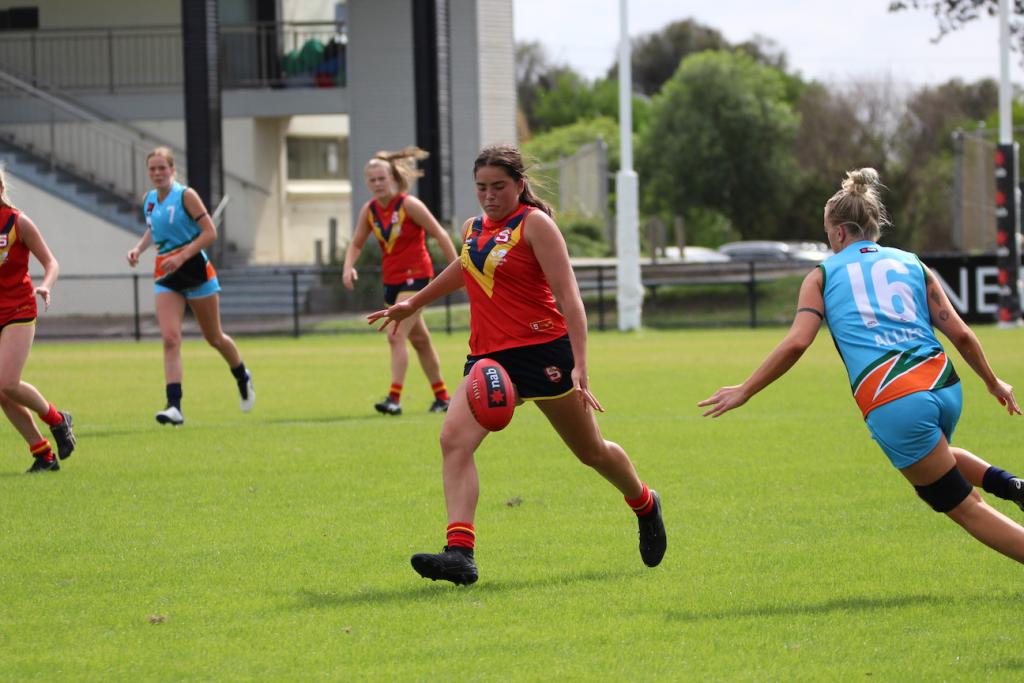 WATCHING her brother play local football at Hope Valley spawned a thought for Alana Lishmund – “I can play that.”

She certainly can play, with the Norwood prospect utilised in a number of roles at SANFL Women’s and state Under 19s level throughout her draft-eligible season. The 17-year-old was part of the Redlegs’ side which won the 2021 minor premiership, enjoying a “smooth transition” into the senior grade over the last few years.

“Everything just flowed in from each other,” Lishmund said during the Under 19 national carnival. “I got to know my teammates and kept going with it, the fun was naturally there. “The expectations climbed, now I’m at Norwood and having a good time.”

Having spoken while Norwood sat atop the SANFLW ladder, Lishmund described the season as “anyone’s game”, and she was certainly correct as Glenelg took out the flag while her Redlegs were eliminated from a tough finals campaign.

The promising utility was made to learn on the job, employed on each line and building nicely throughout her state representative duties to show glimpses of her high potential. Having also donned South Australian colours in 2020, Lishmund says she enjoyed the experience a second time around as she got a taste of each different role.

“It’s been a good experience,” she said. “I’ve done it the last couple years and this one’s definitely a lot of fun, working with these girls as always. The contest is hard which is good.”

“Growing up I’d always be rover or in the centre, but through the years I’ve played here and there so [I’ve been] versatile. “I like the wing, you get to know and grow in the position but I’ll give it a go anywhere.”

That kind of “give it a go” attitude also translates to Lishmund’s on-field effort, as she applies terrific defensive pressure and proves strong it contested marking situations for a player of her 168cm stature. She averaged 1.2 marks and 1.9 tackles per her nine SANFLW games this season, numbers which highlight those strengths.

“I’d say I’m pretty strong in the contest and have pretty good marking ability,” she said. “[I am working on] just keeping up those one-percenters and skills, but maybe some more contested work too.”

Like most talents at her age, Lishmund’s end goal is to get drafted, though she says she will “find something else that [she] can still be involved in with footy” should that not immediately come to fruition. By “working hard for” her teammates and meeting their expectations each time she steps onto the field, Lishmund is certainly putting her best foot forward.