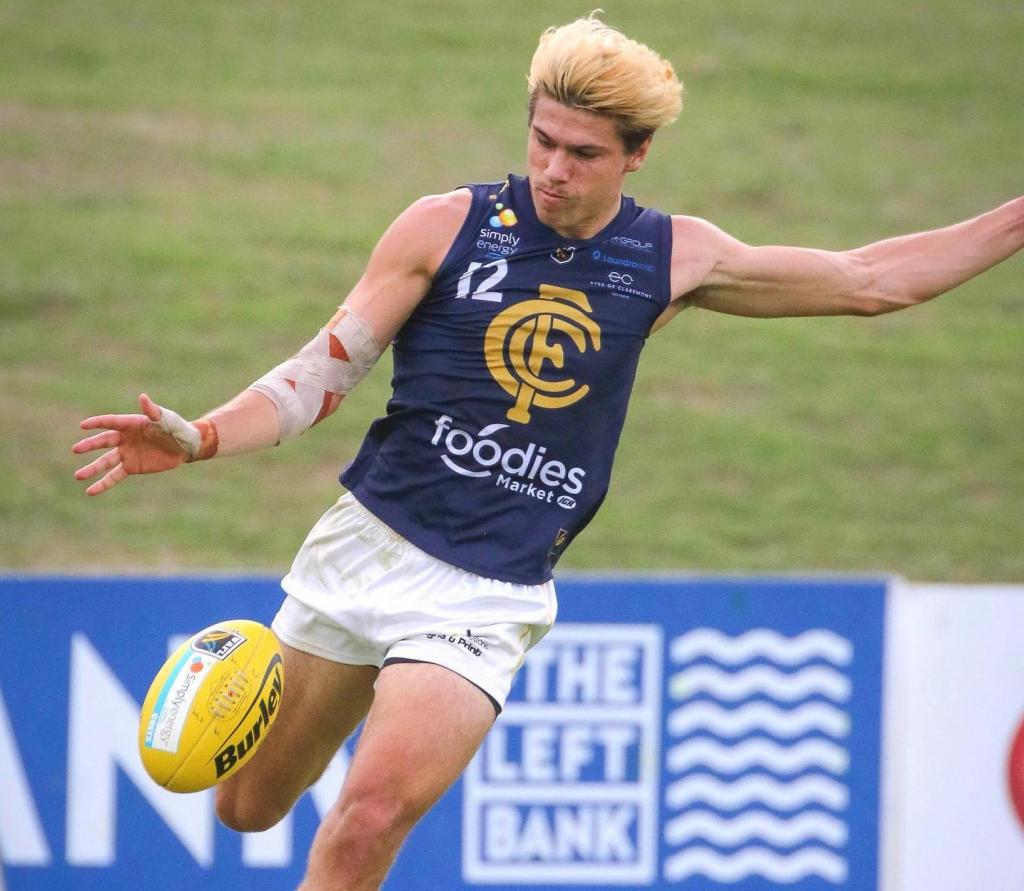 CLAREMONT shot clear in third with a 21-point win over Peel Thunder on Saturday morning, overcoming the impact of multiple changes to come away with its third-straight victory. Peel started the brighter side and opened up an early three-goal buffer through superior conversion, before being pegged back to trail at half time. Claremont took over from there, with four goals to two in term three setting up a more comfortable run home.

We take a look at a few of the top performers from either side in our Scouting Notes, and go around the grounds with some of the other outstanding Colts performances out of Round 10.

Having narrowly missed out on state Under 19s selection, Delacey served a reminder of his talent with a dominant stoppage display. The Claremont ball winner was constantly able to get his hands on the ball at stoppages, while also working hard around the ground to accumulate an equal team-high 22 disposals. He tended to hack kicks away from congestion but gained decent meterage in doing so, helping the Tigers break from the middle. He looked hungry and showed good intent in an overall solid outing.

The highly touted key forward is getting back to his best form, and bagged another strong haul of goals with four on Saturday. He started the game in midfield though, spending about a quarter of his total game on-ball as he returns to full-time minutes. While he provided a big body around the ball, van Rooyen was much more impactful inside attacking 50 despite copping a tricky matchup. He converted his side’s opening goal in the first term from a set shot and snapped another in the following period after marking strongly overhead. His third term double helped Claremont break clear, with two classy snap finishes from tight angles on either side of the goal bringing his tally to four goals on the day. He could have had more too, also registering three behinds.

Benning was able to show glimpses of his athletic best despite copping a heavy knock in the opening term, which slowed his output. The Fremantle Next Generation Academy (NGA) prospect leapt beautifully in the ruck and produced a couple of eye-catching running clearances, pointing towards his potential. He spent a fair bit of time resting deep forward as the game wore on though, even finding the goals on one occasion. Hopefully he shakes off the knock and finds some even better form ahead of his state’s Under 19 campaign.

Another NGA talent, only for West Coast, Alforque continues to dazzle with his speed and repeat efforts forward of centre. The zippy small forward worked up past the attacking arc to find the ball, before wheeling back towards goal with pace and looking to get creative. He is still very raw in terms of his end product, missing some gettable chances once he had done all the hard work beforehand. He did manage to snare a couple of goal though, serving as good reward for his effort.

One of Peel’s top ball winners for the day, Tuia defied his size to consistently crack in at ground level and prove a really productive midfielder. He was a constant in the engine room and managed to get his hands on the contested ball, while also using his pace on the outer as the Thunder broke forward. That kind of play provided real drive for his side, making for a solid contribution overall.

A state Under 19s bolter, Hough showed why he is in line for representative honours with another promising outing for Peel. Stationed on the wing, he competed well for possession and tracked back to accumulate touches, while helping Peel generate some momentum with clean skills on the rebound. He found himself in a more advanced position during term three, marking on a break at half-forward and kicking nicely to Luke Taylor inside 50 to notch a goal assist. Hough should provide solid depth to the Black Ducks’ midfield come National Championships time.

One who is capable of playing in multiple positions, Polson started in the ruck and while beaten early on by Benning for pure leap, he went on to show his upside. The versatile tall is mobile for his size and not afraid to take on players in front of him, weaving through traffic and disposing with poise. He used his running capacity to win the ball around the ground while rucking, but also did some nice work up forward. A couple of strong marks late in the piece capped off his game, which should again put him in the frame for League selection after being teased with it this week.

McIlvinney is often tasked with tough assignments in defence and it was no different on Saturday, as he took on van Rooyen and Benning at different stages. He proved a terrific matchup for van Rooyen, reading the play well and competing aerially against his fellow state Under 19 squad member. The tall defender positioned well to intercept when away from lockdown duties, and generally used the ball calmly by foot as Peel looked to rebound. In a state squad full of promising talls, McIlvinney should provide some solid key defensive fold.

There was only one other WAFL Colts fixture in Round 10, with East Perth getting the better of South Fremantle on Sunday. Spearheading the Royals’ comprehensive 61-point victory was Jye Amiss, who brought his season goal tally up to 30 with another bag of five to continue his hot form. Fellow state squad members Ethan Regan and Kaden Harbour each snared two majors, while wingmen Oscar Armstrong (25 disposals) and Jake Littleton (20) were productive on the outer. On the inside, Kade Dittmar also had it 20 times and James Tunstill found the goals once from 18 touches.

In case you missed the West Australian Under 19 squad announcement, you can find everything you need to know here, while the recent Under 17 squad unveiling can be observed below.

Good luck to our @simplyenergy WA State U17s this weekend against South Australia in Adelaide ?? pic.twitter.com/e99DWON72M