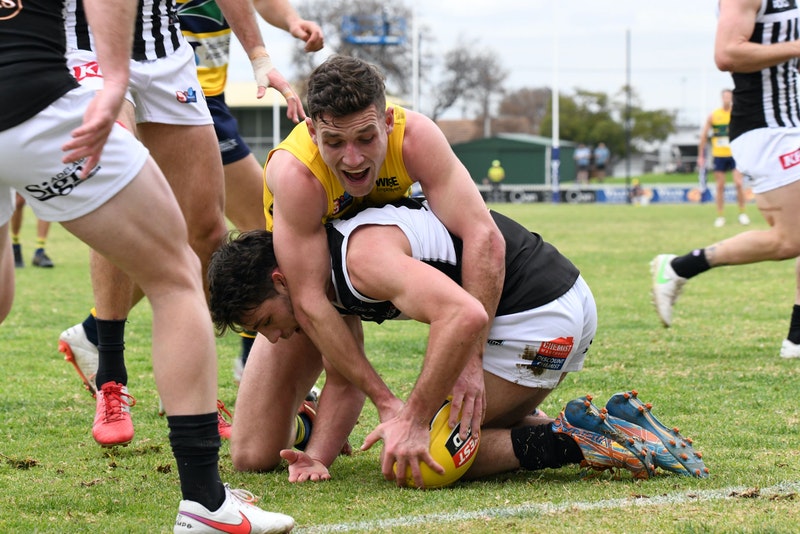 THERE were some key changes to finals calculations across the state league this weekend, with ladder leaders soaring as the following packs jostle for position. Victorian sides still await their return, but it was business as usual in South Australia and Tasmania, while West Australian fans had two fixtures to take in on Saturday and Sunday. We run you through all the results and outstanding performances in this week’s state league wrap.

Teams from everywhere but Victoria carried the Victorian Football League through another round of action, with three AFL reserves sides taking the field across a pair on Saturday afternoon fixtures. The first saw Gold Coast complete a dramatic turnaround against Sydney Swans, with first year utility Joel Jeffrey putting the SUNS ahead in the dying stages having trailed by as much as 38 points in term two. An eight-goal third quarter blitz set up the 17.5 (107) to 16.8 (104) victory, with Jeffrey among four SUNS to boot three goals. Brayden Fiorini racked up a game-high 45 disposals upon returning to the grade, as Sydney bigman Hayden McLean claimed four majors.

With Victorian teams back in training as of last week, a return normal programming should be just around the corner. Southport currently tops the ladder at 6-1 having played twice more than most other teams, while Casey Demons and Footscray remain undefeated at 5-0 to sit second and third respectively.

Woodville-West Torrens moved up to second spot with a comprehensive 68-point drubbing of Port Adelaide, seeing the Magpies drop to fifth. The Eagles broke away with 10 goals to one after half time, with Jack Hayes (28 disposals, three goals) and James Tsitas (41 disposals, eight clearances) among the prominent figures. Jarrod Lienert was kept busy for Port, registering 14 rebound 50s among his 26 disposals as first year forward Ollie Lord showed some promise with two goals and three contested marks.

The Eagles overtook South Adelaide in second, as the Panthers went down to Norwood by nine points. Mitch Grigg continued his return to form for the Redlegs, racking up 34 touches and booting three goals in the win while Matthew Nunn (29 disposals) and Richard Douglas (19, one goal) also played key hands. Former AFL veterans Matthew Broadbent (25 disposals) and Bryce Gibbs (24, 11 clearances and one goal) stood up for the Panthers, as 200-gamer Joel Cross also hit the scoreboard and top draft prospect Jason Horne booted a goal from his 19 touches.

Round 11 of the Tasmanian State League (TSL) went largely as expected, with ladder position telling the story of all three results. The round of action opened on Friday night as Tigers stormed KGV to come away 22-point victors over Glenorchy, seeing the visitors stretch the gap to their weekend opponents to three wins. Max Collidge booted three goals for Tigers, while Riley Oakley snared two for the Magpies as Edward Cole and Nathan Blowfield were named best afield for their respective sides.

North Launceston maintained its chase for top spot on Saturday, doubling Lauderdale’s score to win by 35 points in enemy territory. 14 of the combined 15 goals scored were kicked at one end of the ground, with the Northern Bombers dealing more damaging blows in the first and third terms. Jay Foon booted a game-high three goals and was named the victors’ best player, while Phillip Bellchambers snared two for Lauderdale as Rhys Sutton earned the coaches votes.

Competition leading goalkicker Dylan Riley enjoyed another day out, booting eight majors in Launceston’s 103-point thumping of North Hobart. Riley has bullied the Demons this season, kicking 18 goals in two meetings – including a season-high bag of 10. Alec Wright also featured prominently for the table topping Blues, while Callum Fitzpatrick was named the best for North Hobart after a tough outing.

Claremont rose to the top of the West Australian Football League (WAFL) ladder in Round 10, coming from behind to beat Peel Thunder by seven points on Saturday. The Tigers trailed at each of the first three breaks, before piling on five goals in the final term to sneak ahead at the clutch. Jye Bolton continued his dominance with another 35 disposals and nine inside 50s for Claremont, as youngster Jack Buller booted four goals in the win. Fremantle-listed midfielder Luke Valente was Peel’s biggest ball winner (26 disposals), as the Thunder again yielded a heavy amount of rotations.

The round’s sole other fixture came on Sunday, with East Perth causing a boilover to beat reigning premier South Fremantle by five points. The Royals were ahead at each break and while South remained within striking distance, they were unable to turn the tables and snatch victory. The Bulldogs still sit pretty comfortably in third though, with the Royals’ second win sees them remain ninth. The likes of Angus Scott (26 disposals), Angus Schumacher and Shayne Hill were terrific for East Perth, as Chad Pearson (29 disposals) led all comers and Brandon Donaldson (four goals) proved potent going forward for South Freo.