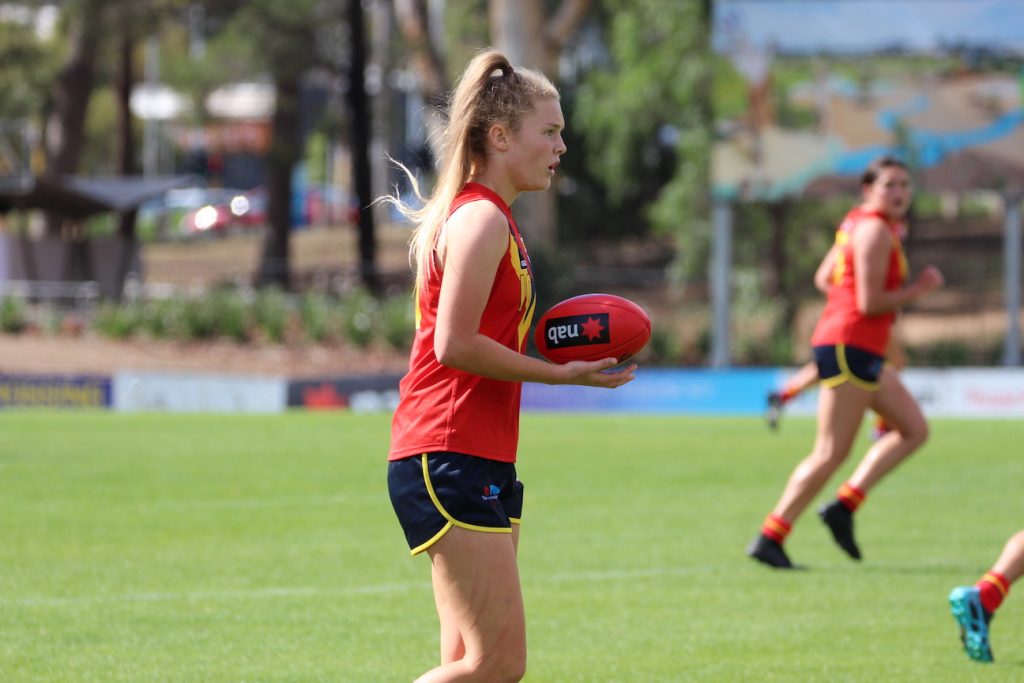 AFTER announcing the inaugural AFLW Draft Power Rankings Victorian Pool, Draft Central is starting a new series – Positional Analysis. It takes a look across the nation and those players within a certain position, and the impact they have. First up is rucks, where versatility and upside comes into play, though a number of the pure rucks have plenty of standout traits and everyone on this list is more than capable at the next level. All opinions are of the individual author.

The standout ruck across the nation is AFL Women’s Academy talent, Zoe Prowse. Though if you had just tuned in to the 2021 SANFL Women’s season, you might have mistaken her for being a ruck, having also played as a key forward and remarkably, a midfielder. She is the ultimate utility, whom at 177cm can play anywhere. Her athleticism around the ground is superb, and she can find the football as well as any midfielder which makes her one of the more readymade rucks coming through junior programs. Prowse’s vertical leap is massive, but she can also get her hands dirty, laying plenty of tackles and causing a real nuisance at ground level. At the AFL Women’s Under 19 Championships, Prowse had to carry the ruck load given the Croweaters’ lack of talls and injuries to fellow rucks, to average 18.3 disposals, 2.3 marks, 22.3 hitouts, 4.0 tackles, 3.0 inside 50s and 2.0 rebound 50s in a complete performance across the board.

The upside for father-daughter eligible prospect Georgia Campbell is quite impressive, with the talented ruck able to rest up forward for parts during games due to Eastern Ranges’ abundance of rucks. There she was still able to kick five goals in eight games to go with her 20.9 hitouts, and also slotted a goal for Vic Metro while averaging a higher 12 disposals, and 12 hitouts at the AFL Women’s Under 19 Championships. The Western Bulldogs supporter is eligible to go to the Dogs, or Melbourne, and will be nominated in the near future. She has great mobility for a ruck and can get around the ground and be an option, and also provide a good presence when inside 50 which makes her difficult to contain. Compared to Prowse, Campbell is not as high of a ball-winner, but is a stronger presence one-one-one, is slightly taller and has been able to spend more time up forward.

The towering ruck/forward’s AFL Women’s Academy season makes it into the top 20 overall (third on these rankings) on the back of a solid overall season. Whilst she still needs to work on clunking more grabs above her head, Gillard’s work around the ground and ability to get to repeat contests for a ruck and running as a midfielder is really impressive. Often towering over her opponents, Gillard moves incredibly well, and is a tall that teammates are not afraid to use in transition, as she rotated between the ruck and full forward to average 11.3 disposals and 14.1 hitouts, as well as a couple of inside 50s per game. A December birth, Gillard has plenty of upside that with time could develop into a damaging tall. There is a running theme with athletic and versatile rucks, and Gillard might have some development to go, but with the extra height – 13cm more than Prowse for example – she can certainly dominate with her mobility.

A little more raw than the three others, Lakay has developed her game coming from a basketball background at quickly learning the ropes at Swan Districts. The talented tall is just as athletic as the others in this list, and one of the stronger contested marks in the ruck crop. Both West Australian teams would have to be considering Lakay for her upside, particularly given she has the clean hands both at stoppages and around the ground. She moves well and has competed strongly at WAFL Women’s level, and whilst her ruck craft is still always improving and her fitness is another area she cited as a way to build her game, she is a player with exciting potential. At 186cm, Lakay is taller than most rucks, and whilst she even admitted that coming up against Prowse was a challenge at the AFLW Under 19 Championships, she acquitted herself well in the second game against Vic Metro, sharing the ruck load with Lauren Wakfer.

The AFL Women’s Academy ruck is the strongest one on the list, able to compete against senior players with ease. Rather than beating them through athleticism like many of those in this group, Morphett has a point of difference in the fact that she is able to win through strength and power, happy to engage in one-on-ones. Whilst not likely to burst away quickly from a contest, Morphett will wear down opposition rucks with her work rate, and is one of the more pure rucks in the draft crop. She came second in the AFL Canberra Best and Fairest last year as a 16-year-old, and has not done too much wrong for the Bushrangers, GIANTS or Allies in their respective campaigns. Morphett has natural leadership to-boot, captaining the Allies at the AFL Women’s Under 19 Championships, and with her superb ruck work, she is one that many can learn off at stoppages.

If we are talking about points of difference, then Gippsland Power ruck Matser certainly has that in a ruck. Standing at 186cm, Matser is an early 2003 birth, but has been involved in the Power program since the V/Line Cup days, even as a developing tall back then. What really makes Matser stand out compared to other rucks is her footy IQ and her kicking. Being a left footer, Matser uses the ball well around the ground, so is a player that teammates are happy to give the ball to and dispose of, with her ball drop, technique and delivery inside 50 quite impressive. When watching Matser at stoppages, she always gets to the right position, and whether or not she wins the tap, she has made life difficult for her opponent. The area of improvement for Matser is her overhead marking, mostly because she does everything right – positioning, timing the ball drop and protecting the zone – but needs to hold onto the grabs. Around the ground in play, Matser is as influential as any ruck, and when she can clunk those grabs, will become a more influential key position tall at either end.

Last but certainly not least of the AFLW Draft Combine invites is mature-age ruck Cutting out of Norwood. If the list was on readymade ability, Cutting would be number one by a long way, with the 29-year-old having cut her teeth in the SANFL Women’s level for many years. Obviously it goes without saying she had more than a decade on her contemporaries, so Cutting is perfect for a team looking for a readymade ruck replacement and someone who can slot straight into a side. Every time a Norwood player is mentioned it is hard to ignore the link with ex-Redlegs coach Steve Symonds, whose Magpies have lost two rucks – Sharni Norder and Abbey Green – for one coming in – Alison Downie – so they could look to another experienced body to join the program. At SANFL Women’s level, Cutting averages 12.7 disposals, 2.6 marks, 2.5 clearances, 2.2 inside 50s, 8.2 tackles and 30.1 hitouts at senior level, with remarkable consistency.

There are seven genuine ruck options available for AFL Women’s clubs from an AFLW Draft Combine invite perspective, with three of them being more pure rucks, and the other four a mix being rucks who rotate forward, and genuine utilities around the ground. In terms of overall Power Rankings, Prowse would be a top five pick such is her overall talent and upside, which she showed at the AFLW Under 19s Championships. The most readymade ruck is Cutting, and the cleanest ball user is Matser, with Morphett being the strongest, and Gillard, Campbell and Lakay being the most versatile after Prowse. In the end, it comes down to what type of ruck clubs are looking for, as they all offer different traits which makes it fascinating.