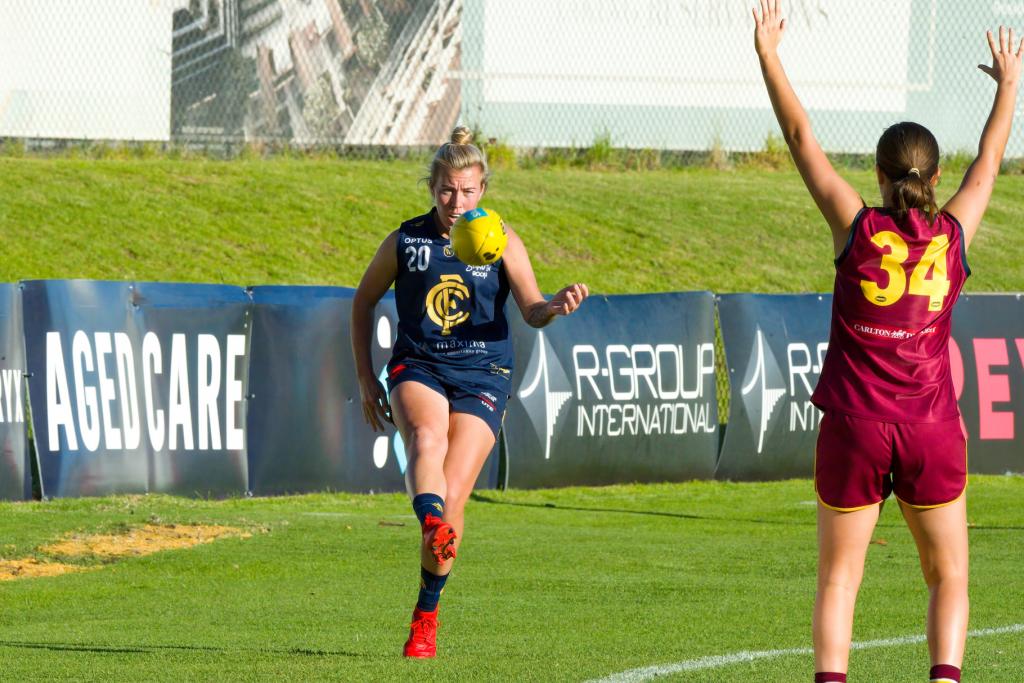 CLAREMONT has put its hand up as a genuine West Australian Football League (WAFL) Women’s premiership contender after the Tigers’ second successive win against a finals-bound side on the weekend. Claremont defeated reigning premier Peel Thunder by seven points – just a week after knocking off fourth placed Subiaco – to secure a home final this weekend. The Tigers will lock horns with the Lions in the first week of finals, with a win seeing them take on either the Thunder or top of the table Swan Districts the following week.

The 6.4 (40) to 4.9 (33) result in favour of the Tigers was more down to capitalising on chances than anything else, with three less scoring shots, but a three goals to zero second term giving the home team some separation on the scoreboard. Not even an inspired game by star teenager Ella Roberts could help the Thunder get over the line, though they did draw within a kick late in the game to give the home fans something to worry about.

It looked like a finals game early with neither side able to take much of an advantage as the tackling pressure was sky-high. Peel’s defence was holding up well against a flurry of Claremont forward thrusts, but then the reigning premiers showed how they managed to topple Swan Districts last week, by getting it up the other end and being the first to score through a Kate Bartlett behind. Roberts was already getting involved, but the Claremont defence was steadfast, as Sophie McDonald rushed through a behind off a Jaide Britton flying shot on the line.

Instead the ball went up the other end and Tessa Doumanis – fresh off an invite to the AFL Women’s Draft Combine – narrowly missed a chance on the run as she was taken down, then won a free kick after being tackled high by Ebony Dowson, and converted the goal just before the 10-minute mark of the quarter. Two minutes later, it was Roberts who created some magic with a free kick, drilling ball that bounced off her teammates’ chest, received it back, sidestepped an opponent and slotted it off a standing start as if she was strolling into an easy goal. When Aisha Wright had a quick kick that bounced through for a behind, Peel lead by three points, and Jacinta Valentini saved a potential late major with a mark in the goalsquare.

A very unlike Peel setup cost the Thunder a goal in the opening minute of the term which ended up being a bad omen for the rest of the term with Claremont putting the foot down. In just 50 seconds of action, the Tigers raced the ball down on the overlap and found Mhicca Carter all alone in the pocket and the talented goalsneak literally did stroll into an open goal. Peel’s only score of the term came off a Kira Phillips behind, whom did well one-on-one, then sidestepped her opponent, feigning a handball to put it on the boot but it missed to the left. The ball then went up the other end with Brooke Whyte taking a strong mark off a drilling Amber Goodwin-Wissink ball. Whyte turned around and headed for a vacant goalsquare with Mikayla Western heading back, but the ball bounced perfectly through the middle for another one.

Peel could not buy a goal as the usually-reliable Phillips missed a set shot from straight in front as it fell short, and instead, Claremont produced a seven-point play. Doumanis missed to the side for a shot on goal at the 12-minute mark and then captain Ella Smith intercepted off the kick-in to find the loose Goodwin-Wissink all alone 15m out from goal. Despite making the goal umpire work, she put it through the middle and despite having relatively similar inside 50s, it was Claremont that booted the only three goals of the quarter and headed into half-time with a 15-point advantage.

After a quiet quarter by her standards in the second term, it did not take Roberts long to weave some more magic. Just as the Thunder needed someone to stand up, Roberts produced a fantastic pickup and hit Bartlett inside 50 who turned around and never looked like missing. The Thunder did the majority of the attacking as they had seven shots on goal with Roberts almost setting up another to Tajah Griffiths, and Bartlett missing a shot from a tight angle she would normally gobble up. Claremont made them pay, by kicking a goal with its first deep inside 50, as Goodwin-Wissink got ball to boot off the left and dribbled it home for second. A late 50m penalty to Phillips saw her have a shot that would normally result in the pen going down, but she missed again. Moments later however she was on the receiving end of a pass inside 50, quickly turned her body and slotted it home to cut the final break deficit back to six points.

Again the game was in Peel’s forward half for the early moments, but the delivery going forward was not ideal as the defenders such as Rachel Ortlepp and Kate Orme were picking everything off. Up the other end, Goodwin-Wissink had the chance to put a nail in the coffin after some great Carter magic, but missed her set shot. Not long after, Whyte did just that, capping off a fantastic game with a set shot from 30m out slamming home, rewarding her big contested mark against three opponents, reading the ball better in flight than anyone else. The margin was out to 14 points and the game looked done and dusted.

The Thunder refused to throw in the towel though, as repeat entries kept pressure on the home side. Orme saved a certain goal right on the line at the 11-minute mark, but the Claremont defence – and midfield when it got out of the Peel forward 50 – was able to keep chewing time off the clock. Nel Baxter knew time was of the essence however, and quickly played on from a free kick with two minutes on the clock and slotted one on the run for a single straight kick. Unfortunately a crucial 50m penalty against Gracie Fenton for assuming the Thunder had the free kick handed Valentini a shot on goal, and whilst it fell short, Smith marked and delivered to Orme who kicked a behind just prior to the final siren.

In her 50th game, Chloe Wrigley was outstanding behind the talents of Roberts, with Fenton and defender Cassie Davidson also impressing. For the Tigers, McDonald was outstanding on the last line teaming well with Ortlepp, whilst Jess Low was influential throughout the game, particularly in the first half, and Whyte had some strong plays around the ground.

In other results, Swan Districts predictably ended South Fremantle’s season with a big win. The minor premiers bounced back from their first loss of the season to the Thunder last week with a 63-point thumping of the league’s wooden spooners, 11.9 (75) to 2.0 (12). Four players kicked two goals in the game for the winners, including bottom-age talent Tara Stribley, as Nyra Anderson and Kloe Taylor were named among the best. Melissa Silcock and Lauren Wakfer kicked majors for the Bulldogs. Meanwhile Subiaco kept East Fremantle at arms-length throughout their contest to get up 12 points and head into the do-or-die final with Claremont following a 7.6 (48) to 5.6 (36) victory. Amy Hunt and Philipa Seth both booted multiple goals for their respective teams, as Abbey Dowrick and Marni Alston were named best-on.