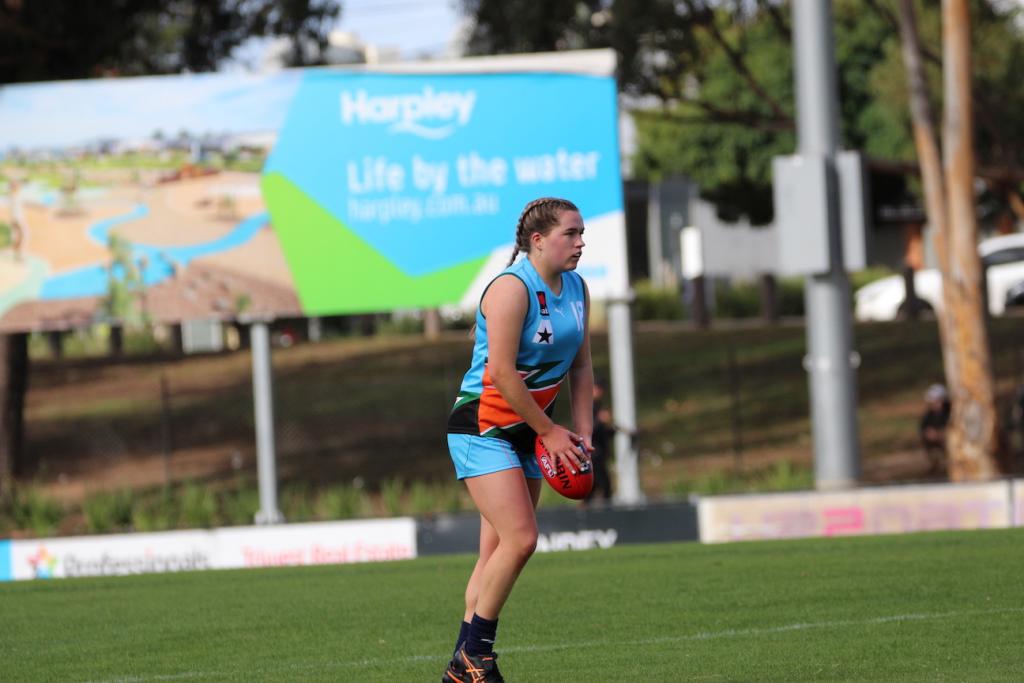 WHILST getting drafted is the ultimate goal for Canberra’s Eleanor Bishop, the talented teenager would have no qualms about going through the GIANTS Academy pathway again in 2022 if needed. Bishop, who represents Ainslie in the AFL Canberra, said the structure and atmosphere of the GIANTS had been really enjoyable and had given her plenty of opportunities to showcase her football on the big stage.

“It’s been really easy,” Bishop said. “The whole management of it has just made it so easy, and I understand what I need to do, and I’m really enjoying it. “I’d really love to get drafted, that’s definitely what I’m working for. If not this year, then I’ll go through the GIANTS again next year because I’ve really been enjoying it.”

Bishop’s journey through Australian rules football started a few years ago where she followed a friend to the Gungahlin Jets, before making the switch to Ainslie after 12 months. From there, one thing lead to another and Bishop was able to run out in the orange, white and charcoal and eventually the 2021 AFL Women’s Under 19 Championships.

“I started in Year 9 at the Gungahlin Jets in Canberra,” Bishop said. “I played there for a year and then I decided to move to Ainslie Football Club which is more of a family thing for me. “I first stated at Jets because my friends were, and I didn’t have any friends at Ainslie and then played against Ainslie and I knew the whole team, so then I just moved the next year.

“Then I didn’t start doing any rep stuff until last year and then from that I kept getting invited to the GIANTS stuff, and I’ve been training with the GIANTS Academy boys which has really developed me as a player and I’m just getting so much better. “Now I’m here and I’m really appreciative of my opportunity.”

Bishop played both the Allies games, recording nine disposals per game, as well as 2.5 inside 50s, 2.0 rebound 50s and 3.5 tackles. Whilst usually an inside midfielder, Bishop’s ability to hit a target and track the ball to win it regularly for her team resulted in her playing an important role in defence.

“I love playing onball, in the middle,” she said. “But in this (AFLW Under 19 Championships) I’ve been thrown in the backline which is very different for me and I’ve adapted pretty well and I haven’t been playing bad.”

Whilst her disposal and accumulation skills are her self-proclaimed strengths, Bishop said she is hoping to improve her endurance, saying she just needs to “run a bit more” in order to increase her fitness. As for inspirations to look up to, the Essendon fan named one of the midfield talents there, as well as a more local inspiration who she hopes to follow in the footsteps of one day.

“In the men’s space I really enjoy watching Zac Merrett because I go for Essendon,” Bishop said. “But in the women’s space Britt Tully because I play with her at my club. She’s captain-coach at Ainslie and I really look up to her because she plays a similar style of game to me.”

Whilst the future might not yet be known, one thing is for sure – Bishop is doing everything she can to improve her game and get on the radar of AFLW clubs.