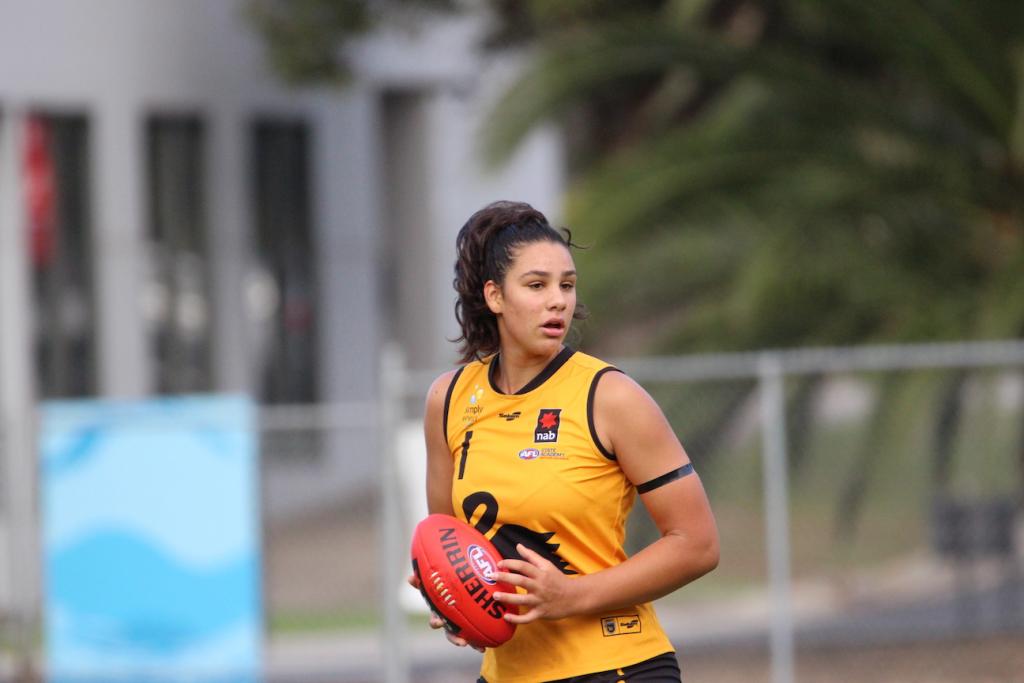 AMONG the many code-jumping athletes gunning for the height of women’s football is Swan Districts ruck Sarah Lakay, one of Western Australia’s 15 National Combine invitees in 2021. The 186cm prospect has taken to Australian football with aplomb since crossing from basketball, rising from a local club which “lost every game”, to becoming a key part of her state’s Under 19 championships squad.

“My friend invited me to go down and play down at my local footy club,” Lakay recounted. “It was me in the ruck, my friend who was a rover, and my little sister. “It was a small footy club at the time, we lost every game but I loved it, I fell in love with it instantly… from there I’ve only played club level footy up until this year. “This year I decided to try get into the state team and here I am.”

There has been plenty of learning along the way for Lakay, who has adapted on the job against quality opposition. Having cracked the senior WAFLW grade, her first assignment at the Under 19 carnival was to go head-to-head with South Australian ruck, Zoe Prowse, arguably the best pure ruck in this year’s draft pool.

“Playing [South Australia] was awesome,” Lakay said. “It was a good wake-up call for me because obviously the other ruck was really good, so that challenged me and I was like ‘okay, these are some things I need to work on’. She contested with me really well.

“I had to work on my fitness, getting around the ball and I think I definitely improved on that [in the next] game. “I think in terms of ruckwork I need to work on going up and using my knee as well. “Obviously coming from a basketball point of view I’m used to jumping straight up and not really using my knee to get up and propel myself to get up to the ruck taps.”

The hands-on learning curve has not only helped Lakay identify areas of growth, but also what her key strengths are. She humbly put down her “mind-blowing” selection in this year’s state team to a “significant advantage” in height, but Lakay’s athleticism and contested marking ability have her pegged as a versatile tall talent.

“My height and my overhead grabs [are key strengths],” she said. “I can take a few good marks overhead, and I think that my ruck work is actually really good – being able to tap it directly to people and getting over people with my jump and reach to get it down to the rovers.”

With two AFL Women’s teams in her home state, there are plenty of current top level players to look up to. There are arguably few better for a young key position player to idolise than Fremantle’s Mim Strom.

“I’ve been watching the football more recently, especially AFLW football and Mim Strom is a definite standout,” Lakay said. “She’s in the position where she wasn’t first pick, but she’s just worked really hard to be where she is now and she’s doing amazing now, so I look up to her a lot.”

As far as her own journey and goals, the 18-year-old simply wants to become “the best player [she] can be.”

“Let’s see how far that takes me,” she said. “I definitely want to play AFLW and if that is what I accomplish, that’ll be so awesome.”