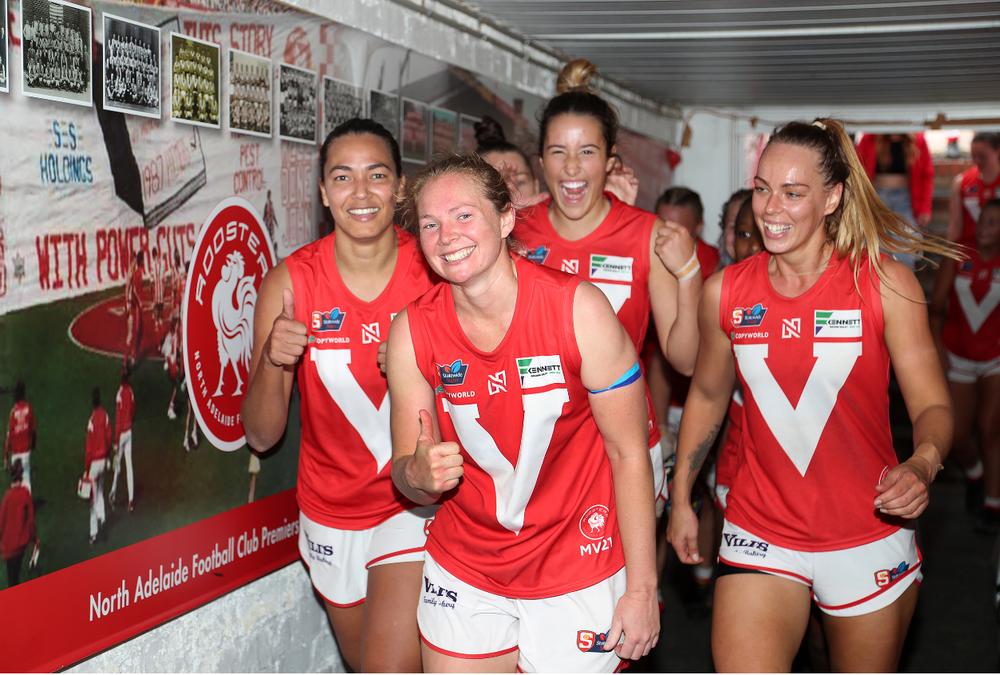 IN summarising the 2021 South Australian National Football League (SANFL) Women’s season, Draft Central will run through a team-by-team review of how each of the sides fared, and who some of the standout performers throughout the clubs were. The next team in the firing line is North Adelaide.

Season in a Sentence: “The reigning premiers lost a lot of talent to AFL Women’s, so were able to blood some fresh players and stand up defensively, but ultimately fell short of trying to defend their title in the post-season series.”

The reliable full-back and rebounder had an outstanding season once again, playing all 11 games for the Roosters and being a rock solid option in the back 50. She pushed up the ground when required, but it was her strong overhead mark, intercepting ability and powerful kick that stood out. Using the ball at a terrific 80 per cent, Harvey averaged 12.1 disposals, 3.1 marks, 2.7 tackles and 4.2 rebound 50s for the season, earning Team of the Year honours for her efforts.

Looking to force her way back onto an AFLW list, the hard-nosed inside midfielder showed she could play in multiple positions around the ground. Spending tim up forward and on the outside, Tabb still cracked in to average a ridiculous 8.2 tackles with her 11.8 disposals. She had 2.1 clearances and 2.5 inside 50s, and booted five goals in her 11 games, showing she was a key player at state league level. She also made the Draft Central Team of the Year for her work.

Providing run on the wing and stepping up for the most part in the absence of the drafted Katelyn Pope, Greet earned SANFL Women’s Team of the Year honours for her season. She averaged the 13.0 disposals, 2.3 marks, 2.0 tackles and 2.2 inside 50s, often using the ball in transition to move it quickly going forward. She was a link in the chain and a player her teammates could rely upon to keep her side in possession.

The bottom-age tall talent was able to play in a key defensive role and lockdown on opposition dangerous forwards in 2021. A member of the State Academy, Borg even had a crack in the ruck for extended periods of time against West Adelaide in Round 3. She was not a huge ball-winner, but averaged the 8.1 disposals, 1.2 marks, 1.8 tackles and 1.3 rebound 50s, with her ability to nullify opponents her key strength. Aside from Lauren Young and Shineah Goody, Borg was the next youngest SANFL Women’s Team of the Year representative.

North Adelaide had plenty of impressive contributors throughout the season, and whilst Lauren Daniel only played the four games, she was still impressive in most, whilst Talia Radan, Leah Tynan, Brianna Arthur and Kathryn Reynolds provided the experience. Kate Case, Julia Clark and Jorja Eldridge were other State Academy members who were able to play their fair share of football, whilst had it not been for an ankle injury, no doubt teenage talent Hannah Ewings could have had a big say on proceedings this year.