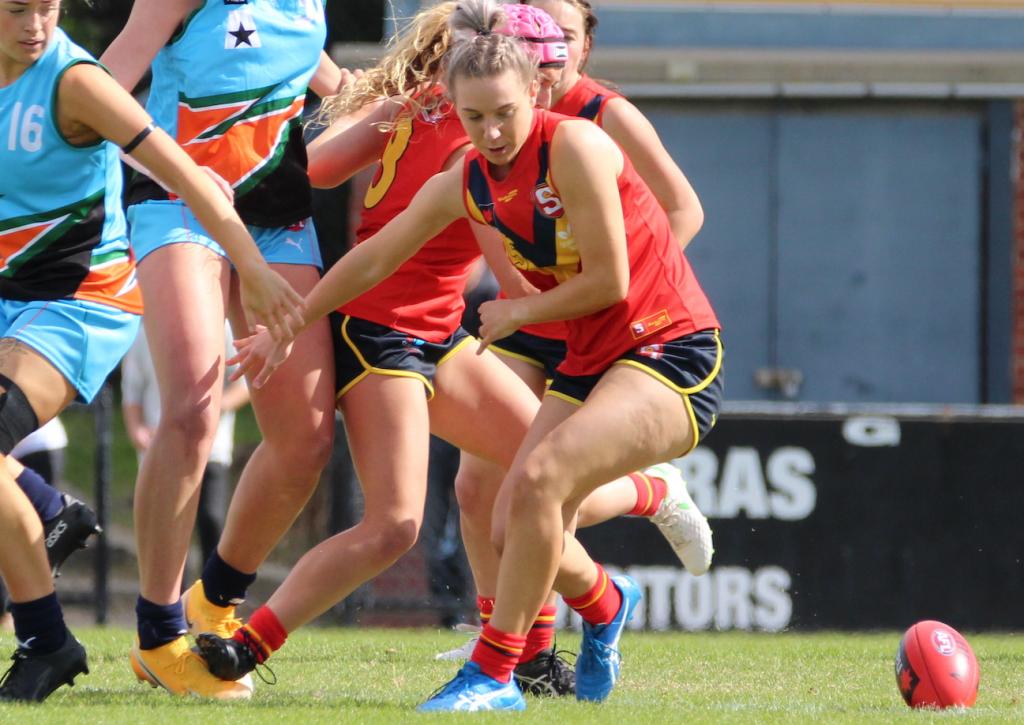 WHEN asked of the key traits she wanted to present at the AFL Women’s Under 19 National Championships, the answer was pretty straightforward and ominous for Jamie Parish.

The versatile Woodville-West Torrens talent has enjoyed a swift journey into the South Australian talent pathway, crossing from other codes and being thrust into the SANFL Women’s system.

“I started off as a basketballer and a netballer,” she said. “I ended up having to fill in for a local club, I played one game and they were like ‘why don’t you give SANFL a try?’… so then I basically hopped straight into the SANFL, played a couple of years and ended up playing state.”

Parish described her 2021 state league form as “up and down”, but is enjoying the “learnings” of being tested in a variety of roles. Having cut her teeth as a key defender, the 171cm prospect was also thrust into the middle at the National Championships and can even swing forward or provide a handy ruck fold.

“(My coaches) are playing me in a lot of new positions and not just keeping me down back, so that’s been really good.” she said. “I am a key defender but I have been swapping through the midfield recently. “Hopefully I get a run in the midfield but it really just comes down to game day, because sometimes they’ll chuck me up forward as well, so who knows.”

While the 17-year-old was a mainstay throughout the Eagles’ SANFLW campaign, she was restricted to two of a possible three state representative games. Parish took on Western Australia in game one and was “pretty happy” with her performance, before returning for game three against the Allies down in Victoria, after being isolated due to COVID-19 precautions as her side battled Vic Country.

Parish looks up to the likes of Adelaide women’s captain Chelsea Randall and Western Bulldogs superstar Marcus Bontempelli, who she said are “hard at it and great players (she) always looks up to”. Boasting a similar competitive edge and the ability to play on multiple lines, Parish is also clean by hand in tough situations like her two idols. On the flip side, she says she is “motivated” to keep improving her fitness.

In true impartial fashion, the South Australian supports both Adelaide and Port Adelaide in the men’s AFL competition, while backing “all of them” in the women’s league. With expansion continuing at the top flight, there will be greater opportunities for developing prospects like Parish to crack the elite level and potentially run out alongside those she cheers on.

Outside of football, the current Year 12 student says she is one who “enjoys the sunshine”.

“Other than that, I’m just a casual sleep in until 12 o’clock and think about doing something sort,” she said.