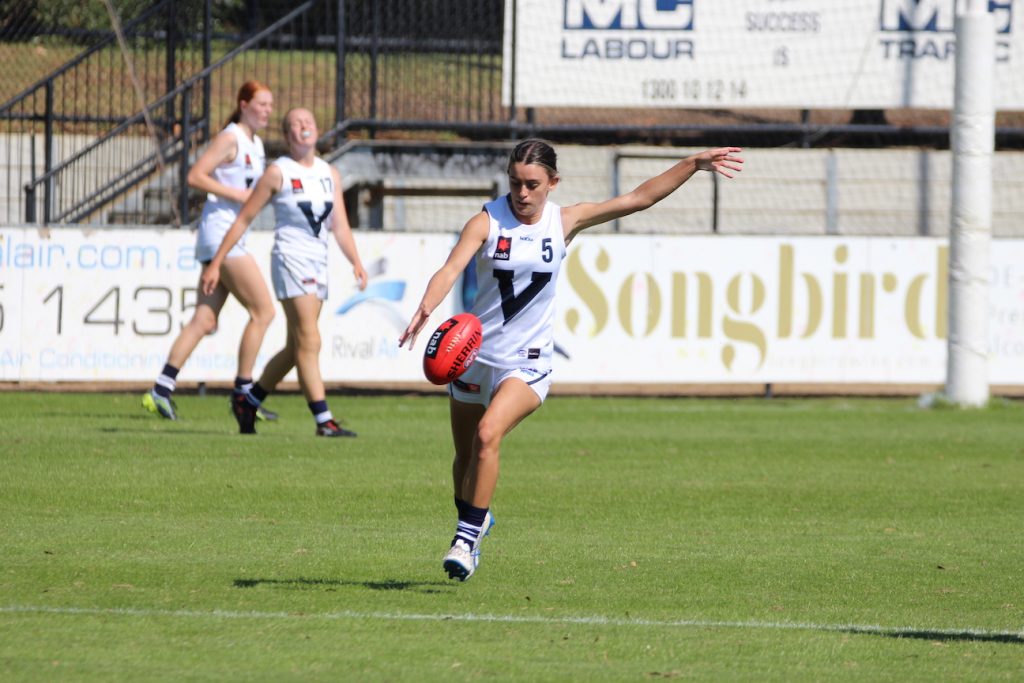 IN the next edition of our Ones to Watch series, we take a look at those players from Victoria who for one reason or another missed out on being picked up in last year’s draft despite being eligible. We name 10 players as Ones to Watch who have stepped up in 2021 to put their best foot forward through both NAB League Girls and Victorian Football League (VFL) Women’s competitions.

After having a solid start to the 2020 season, Chaplin has built on her performances in past years to become a dominant inside midfielder. Stronger than most opponents, Chaplin not only won plenty of contested ball and clearances, but was able to hit the scoreboard on occasions too. She finished the NAB League Girls season averaging 17.3 disposals, 5.0 tackles and 3.0 inside 50s, providing plenty of drive going forward, but also showing she can play off half-back too, something she has done in the past.

Playing nine games for Geelong Falcons, a couple for Williamstown and squeezing her way into the Vic Country team for the state’s final AFL Women’s Under 19 Championships match against Queensland, Garth has tested herself against plenty of different opponents. Whilst not a natural high possession winner, Garth is a fierce tackler who plays as a high half-forward and someone who is able to play a role in the forward half. Averaging 8.8 disposals and 6.1 tackles per game for the Falcons, the 168cm talent brings the heat when out on the field.

The only player on the list not to play in the NAB League Girls competition this year, Hards has not missed a match all season for the Western Bulldogs in the VFL Women’s competition. One of only two players to achieve the feat for the red, white and blue, Hards has been utilised in all three areas of the ground, but has been most damaging off half-back and pushing into her familiar role on the inside midfield. Her athleticism and footy smarts are what stand out on the footy field, and the ex-Bendigo Pioneers captain has been building confidence as the season has progressed.

After plying her trade as a wing and outside runner in her first draft-eligible year, Jordan honed in on her inside craft this season, to earn a spot on Vic Country’s list and play every AFL Women’s Under 19 Championships match. She has also been able to play a couple of games for the Southern Saints in the VFL Women’s competition, showing she can step up to the more senior level. A lot of her good work comes from her remarkable work rate, where she covers the ground like few others, and along with her speed and natural leadership, stands out across the ground.

The consistent Rebels ball magnet has hardly put a foot wrong in the 2021 season, also choosing to represent Geelong in the VFL Women’s, and made her debut against the Southern Saints. Able to win the footy across those competitions as well as the AFL Women’s Under 19 Championships, Leonard laid a massive 7.1 tackles per game across nine matches in the NAB League Girls, as well as 19.4 disposals, 2.4 marks and 4.0 rebound 50s, playing between defence and midfield, often mopping up and clearing the ball from danger. An ultra-consistent player where you know exactly what you are going to get each match.

Another consistent player who toiled away in a side that did not have a lot of luck in Gippsland Power, but it did not stop McRae putting in regular four-quarter performances. One of Vic Country’s better players across the AFL Women’s Under 19 Championships, McRae has developed into that consistent contested ball-winner, backing up the glimpses she showed in 2020 to average 16.6 disposals and 7.0 tackles at NAB League Girls level, then picking up 21 disposals in a game for Hawthorn VFL Women’s, for a three game average of 12.7 disposals and 7.0 tackles. A tackling machine.

After missing out on being drafted last year, Meagher went back to the Ranges where she played three games before stepping up to represent Collingwood at VFL Women’s level. There she became a consistent performer, even earning a place in the Anzac Day winning side, and averaging 14.5 disposals per game across six matches. She put up numbers of 18.7 disposals, 4.7 inside 50s and 5.3 tackles for the Ranges earlier in the season, and at 157cm is strong overhead. She has proven she can play inside or outside, and is a natural ball winner with defensive and team-orientated goals.

The pocket rocket from the Chargers won a premiership at NAB League level, returning from injury just in time to play a role in Oakleigh’s assault on the flag. In 10 games, Morton predominantly played deep forward and was deployed as a small who could bring he pressure around the ball and create scoring opportunities. Though she did only kick the three goals, Morton was able to lock the ball in and force turnovers from the opposition, and has already played the three games for the Borough, where she has averaged a higher 12 disposals and four tackles in her time there.

Another tackling machine who has proven she can stand up at both junior and senior level, Snell had a really impressive 2021 year. She averaged 20 disposals, 3.5 marks and 8.8 tackles, which was made all the more impressive given she won a lot of her ball at the coal face, before spreading hard to the outside where she was able to provide separation from her opponents and pull down plenty of marks. Strong overhead, with elite athletic and defensive traits, Snell certainly did her draft chances no harm with her season, and managed to play a couple of games for Vic Country at the AFL Women’s Under 19 Championships too.

Tierney is a unique player in the sense that despite being smaller than most leading forwards, her strong hands and powerful one-on-one capacity make her more of a tall than a medium forward. She is able to create scoring chances out of nothing, and is a reliable set shot for goal, booting 11 majors in eight games at 1.4 per match for the Geelong Falcons. She also averaged the 13 disposals, three marks and two inside 50s, showing she can work up the ground and even pinch-hit in the midfield if required. Most dangerous close to goal, Tierney has also managed the two games for the Cats at VFL Women’s level this season, laying 4.5 tackles to go with 8.5 disposals and 3.0 marks per game.

A number of other players who received AFLW Draft Combine invites last year who have gone on to play at one or both NAB League Girls and VFL Women’s level include key defender Zoe Hill (Dandenong Stingrays/Southern Saints), Jemma Finning (Bendigo Pioneers/Essendon VFLW) and Amber Micallef (Carlton VFLW). Shanara Notman (Gippsland Power/Carlton VFLW) is a year older, but played at both levels this season.