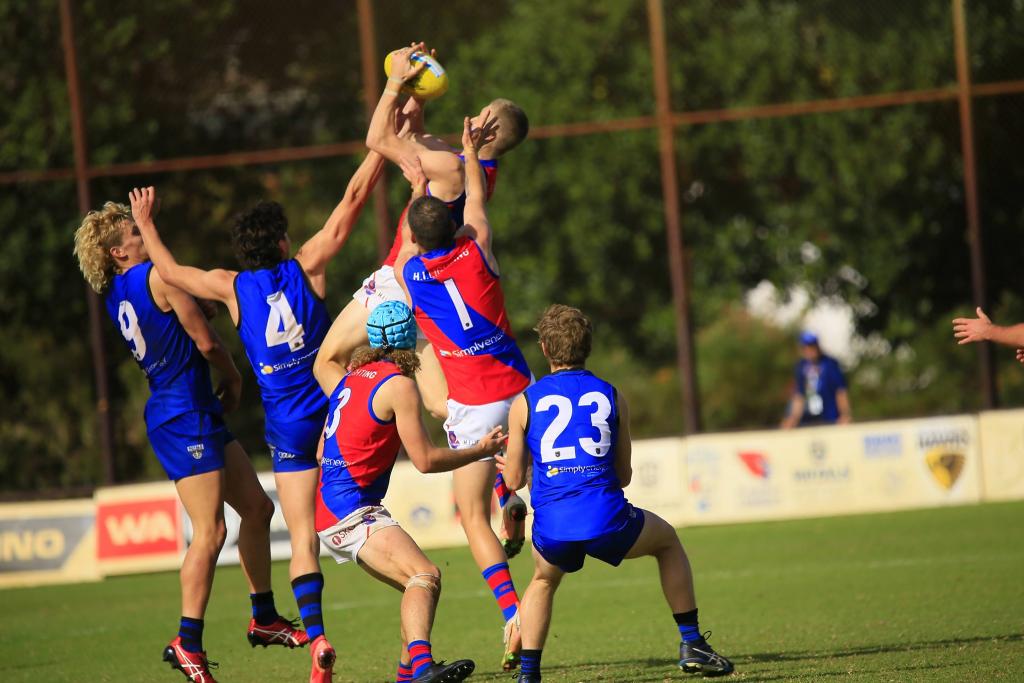 EAST Perth bounced back to the WAFL Colts winner list in style, earning a 28-point city derby win over West Perth on Monday morning. The Royals lived up to the WA Day occasion, leading at each break and powering away with five goals to one during term three to set up a comfortable victory. The 9.13 (67) to 5.9 (39) result sees East Perth remain clear in second spot, while their rivals sink to seventh at 3-4.

We take a look at a few of the top performers from either side in our Scouting Notes, and go around the grounds with some of the other outstanding Colts performances out of Round 9.

Again the standout forward afield, Amiss is in ripping form and booted another bag of five goals for the Royals. While he has improved his overall mobility and ground level craft, the East Perth spearhead found himself most often stationed one-out inside 50 where he could do the most damage. His first two goals, both in the opening half, were relatively straightforward, but the third term is where Amiss really came to life. Three of his five majors came during said period, with two being set shot conversions after showing strong hands on the lead, and the other a classy snap on his favoured left foot after competing for the mark one-on-one. He now has 25 goals for the season and is so potent inside 50, needing few opportunities to hit the scoreboard – even in tough conditions.

After a disappointing display last time out, Dittmar was back to his bullocking best against West Perth. The big-bodied midfielder showed his patented strength at the contest and was able to shrug tackles with pure power, while later getting his legs pumping to break to the outer. His aggressive tackling was another key feature on Monday, as the 18-year-old laid 13 overall with plenty of intent. After sparking a half time skirmish, he came out with a point to prove and was even more fierce in the second half, helping East Perth break away for the win. He capped off his game with a 50m set shot goal in the third quarter, though could do with some sharpening on his field kicking at times.

Tunstill continues to be a consistent ball winner in midfield for the Royals, and proved as much on Monday morning with a game-high 30 disposals. He was able to put East Perth on the front foot by extracting at the contest, before sending quick clearing kicks inside 50. Having ended with 23 kicks and nine inside 50s, that was his main method. Tunstill was particularly prominent during the third term, giving his side a real boost in the engine room by getting first hands on the ball where it mattered most. This was the 17-year-old’s second 30-touch haul for the season.

The West Coast Next Generation Academy (NGA) prospect continued his solid development, proving too good for his counterparts in the ruck. His combination of pure reach and athleticism was difficult for West Perth to combat, seeing him win 33 hitouts for the day. The next step for Soka will be to more consistently guide those taps to his rovers, rather than thumping forward with the momentum of his leap, but he does so a touch better around the ground. Speaking of, Soka again moved superbly for a player of his size and got his hands dirty with some early clearances and contested marks. As a raw talent, there are exciting traits to work with.

Arguably his side’s best player in a dirty derby loss, Reilly consistently burrowed in around the contest and was able to make some clean plays at ground level. The small midfielder has deceptive strength for his size and is not afraid to have a crack, even when running back with the flight of the ball in marking contests. He snapped West Perth’s first score of the day, a minor, and drove the Falcons forward with running spurts. Reilly capped of his solid shift with a classy dribble finish in the final term, roving the forward 50 stoppage nicely and finishing coolly.

Paton spent plenty of time forward in this outing and did some good work in the front half, looking like West Perth’s most dangerous user of the ball. He sprayed a couple of rushed kicks early on but shook off the cobwebs and began to spear some terrific passes inside 50 for the Falcons. Paton was active at stoppages and strong over the ball as usual, with his repeat running efforts capped off by those bullet-like passes to his grateful forwards. He rotated into the midfield but continued to look most dangerous in advanced areas, finishing off with a beautiful left-foot snap running away from goal early in term four.

Subiaco proved far too good for the winless Perth on Saturday morning, powering past the Demons 11.8 (74) to 5.7 (37) at Mineral Resources Park. Jed Kemp maintained his good for for the Lions with a game-high 31 disposals, followed closely by first round prospect Matthew Johnson (30), who is again pressing for a senior call-up. Campbell Henderson was another to impact with 16 touches, 10 marks and three goals, while strong Perth forward Harry Quartermaine also clunked 10 grabs and Zak Meloncelli racked up 23 disposals in the loss.

Swan Districts was the other side to pick up a win on Saturday, defeating Peel Thunder 15.6 (96) to 4.9 (33) to remain clear atop the table. Max Chipper returned his fourth-straight effort of over 30 disposals, accumulating 35 for the Swans and kicking a goal. Tyrell Metcalf snared a bag of five goals in the win, as Brady Hough was again Peel’s most prolific ball winner (24 disposals) and promising tall Luke Polson showed his dynamism with 18 touches, four marks and a goal.

Fast forward to Monday’s second fixture, and East Fremantle moved into the top five with a 12.8 (80) to 6.8 (44) victory over South Fremantle, with both sides now sitting at 4-3. Josh Browne was again outstanding for the Sharks with a game-high 28 touches and one goal, while Kobe McMillan (23 disposals, 15 hitouts, four goals) enjoyed a day out and Jack Williams booted two majors. Caleb Stephens (22 disposals) found the most ball for South, as Julian Hulten and Kobe Foster combined for four of their side’s six goals.

The West Australian Under 19 state squad was also announced on Wednesday. It can be found below via the WAFL.