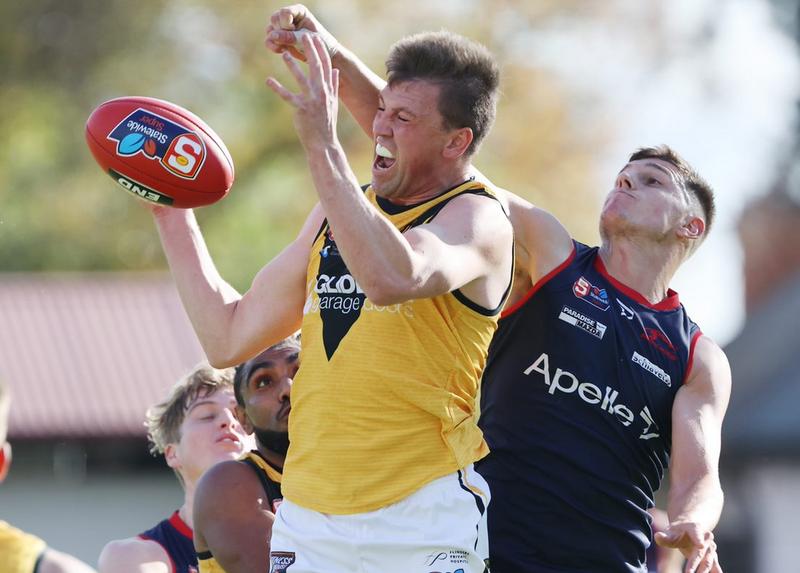 A PAIR of fixtures saw the Victorian Football League (VFL) return on Saturday amid Victoria’s lockdown, while it was business as usual for state leagues around the nation. The West and South Australian leagues both rolled on into their ninth round of action, while the 10th set of fixtures were played in Queensland and Tasmania. We take you through the most eye-catching results and efforts across the state leagues this past weekend.

Mitchell Scholard was another to boot a bag, claiming five majors in Maroochydore’s 41-point win over Surfers Paradise. Top-age SUNS Academy standout Max Pescud finished as the Demons’ sole multiple goalkicker (two) as Daniel Charlesworth earned top votes in the loss. The Roos hopped up to second, with help from Labrador’s bye and Sherwood Districts’ upset win over Morningside. Thomas Baulch slammed home six goals for the Magpies, who now sit seventh behind Surfers Paradise, but have a sizeable percentage to make up.

Elsewhere, Redland-Victoria Point moved clear in fifth after feasting on the winless Noosa, with Peter Yagmoor snagging an equal round-high six majors, while Wilston Grange drew level on points with Mt Gravatt after beating the Vultures by 19 points.

Glenelg clawed its way back from a 48-point half time deficit against Norwood to keep its perfect record (9-0) intact and remain clear atop the SANFL ladder. The Bays booted the last eight goals of the game, with that streak starting and ending via the boot of Toby Pink. Matthew Snook played a key hand in his side’s miraculous turnaround with 27 disposals and 11 tackles, while the returning Matthew Nunn (29 disposals, 2.4) was instrumental for the Redlegs.

On the same Sunday, second-ranked South Adelaide survived a scare of its own against West Adelaide, holding on to win by three points at Hisense Stadium. Connor Fairlie nearly proved the hero for Westies, booting two of his three goals in the final term but missed a tough chance to put his side ahead late in the piece. He and Thomas Keough snared three majors apiece, while Kaine Stevens racked up a game-high 35 disposals for the Bloods. Joseph Haines had it 31 times for South, while Bryce Gibbs notched 28 touches as his side had a spread of 10 individual goalkickers.

On Saturday, Woodville-West Torrens and North Adelaide notched more comfortable wins against bottom three opposition, with the Eagles beating Central District by 29 points, while the Roosters came away 40 points to the good against Adelaide.

Competition frontrunners Launceston and North Launceston came up trumps in dual top four battles, as the Blues accounted for the fourth-placed Tigers to the tune of 26 points, while the Northern Bombers breezed past third-ranked Clarence by 34 points. The results see Launceston remain top with a game in hand to North Launceston, with the top four ultimately unchanged.

Dylan Riley booted five goals for the Blues in their win, while Liam Jones provided a couple of highlights on debut. In the round’s other fixture, Glenorchy moved clear in fifth spot with its 19-point win over Lauderdale. North Hobart had the bye in Round 9, but will return against Launceston on Sunday afternoon.

New-South Wales and Queensland carried the load of the Victorian-branded competition in Round 8, with a game played in each state on Saturday. In the morning at Tramway Oval, Southport moved clear atop the table with a 15-point comeback win over the Sydney Swans, thanks to a six-goal final quarter. The Sharks doubled their goal tally in said term, as Jacob Dawson finished with dominant figures of 41 disposals and two goals. He now leads the league for disposals and handballs. Lewis Taylor and Marc Sheather booted three majors each for the Swans, while Ryan Clarke racked up 34 touches.

The afternoon hitout at Graham Road Oval between Aspley and Brisbane Lions ended in dramatic fashion, as Hornets spearhead Matthew Hammelmann marked and kicked a goal just after the final siren, but thought he had won his side the game. The score did not count, and Brisbane came away one-point winners. Hammelmann, the competition’s leading goalkicker, snared five majors this time out, while former-Lion Ryan Bastinac racked up 37 disposals. Current Brisbane barometer Rhys Mathieson led all comers with 39 touches, as Connor Ballenden clunked 10 marks and Connor McFadyen was one of three Lions to boot three goals.

With Round 7 fixtures postponed last week due to the Victorian lockdown, the competition is set to return this week but nothing has been confirmed as of yet.

WAFL fixtures were spread from Thursday night to Monday afternoon in Round 9, with frontrunners Subiaco and Claremont both picking up wins and moving to 7-1 records. The Lions thumped Perth by 98 points on Thursday, as Ben Sokol feasted on six majors and Gregory Clark notched a game-high 42 touches. Subi tall Lachlan Delahunty (30 disposals, 24 hitouts, one goal) was also dominant, while Simon Hayward finished with Perth’s lone goal of the game.

State league standout Jye Bolton ran riot in Claremont’s 27-point victory over West Coast, collecting a monster 49 disposals, 12 marks and a goal. Four other Tigers ticked over 30 touches, while five of their nine individual goalkickers booted multiples. Eagles mid-season draftee Connor West made an immediate impact in his new colours, finishing on a team-high 29 disposals and snaring a goal.

In the second Saturday fixture, Swan Districts moved clear in the top five with an eight-point win over the inaccurate Peel Thunder, who slide to seventh. West Perth kicked off proceedings on Monday with a 43-point win over East Perth, highlighted by eight goals to spearhead Tyler Keitel. South Fremantle bettered East Fremantle by 16 points to see out the round, seeing the reigning premiers sit comfortably in third, just one win adrift from the top two.