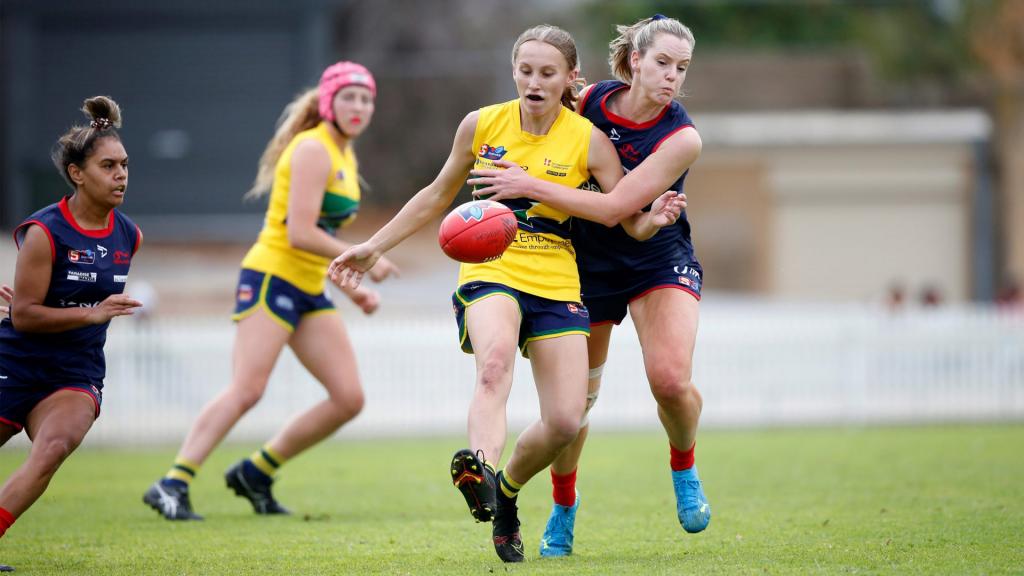 IN summarising the 2021 South Australian National Football League (SANFL) Women’s season, Draft Central will run through a team-by-team review of how each of the sides fared, and who some of the standout performers throughout the clubs were. We begin the review series with the wooden spooners, Woodville-West Torrens Eagles.

Season in a Sentence: “The Eagles strung together three consecutive wins early in the season to even put themselves in a position for finals, but once the AFLW talent rolled back into the top-end teams, the eventual wooden spooners fell back to the pack.”

One of the more experienced Eagles in the team, the versatile midfielder was a ray of consistency in her 11 games, averaging 16.3 disposals, 2.6 marks, 1.6 inside 50s, 1.5 clearances, 5.5 tackles and 2.2 rebound 50s. Holding a disposal efficiency of 69 per cent, Falkenberg did a bit of everything every week, and did not drop below 12 disposals in any of her games. Her best effort came with 23 disposals and six tackles against North Adelaide, also kicking her sole goal for the year in that game. It was no surprise to see Falkenberg come away with the Eagles’ best and fairest award.

The versatile midfielder played forward, then back, and got runs onball to show off just how talented she is. At 15-years-old, Goody is already projecting as a highly talented player of the future, and she proved it by coming second in the club best and fairest in her debut season. A member of Port Adelaide’s Next Generation Academy, Goody averaged 12.5 disposals, 2.5 marks, 2.1 inside 50s, 1.6 clearances, 1.9 rebound 50s and laid 5.4 tackles. She used the ball well with a 70 per cent disposal efficiency, but it was her class and athleticism that really came to the fore.

Still a youngster herself, Zuill enjoyed a strong season, winning her fair share of the ball through the midfield. Playing all 11 games, Zuill finished with 12.5 disposals, 2.1 marks, 2.7 tackles and 2.0 clearances, using the ball at 60 per cent efficiency. She finished third in the Eagles’ best and fairest and had a really strong finish to the season, including 36 disposals, 10 tackles and 11 clearances between the losses to North Adelaide and Sturt.

Capable of playing at both ends of the ground, Lee played 10 games and provided a contested marking specialist be it on the last line, or leading out from full-forward. She finished with 11.2 disposals, 3.9 marks, 2.5 tackles and 1.6 rebound 50s per game, clunking 18 contested marks, the second most of anyone in the competition. Often finding more of the ball in defence, Lee showed she could be thrown forward and find the big sticks as well.

The Eagles had a number of consistent contributors from Jovanka Zecevic and Amie Blanden, to State Academy members Charlotte Dolan and Jamie Parish. Coming back from an injury early in the season, Jaida Tabb remains one to keep an eye on alongside the likes of Goody, Astrid Gooley, Marlie Fiegert and Chloe Whittington-Charity who are the core for the Eagles’ future.