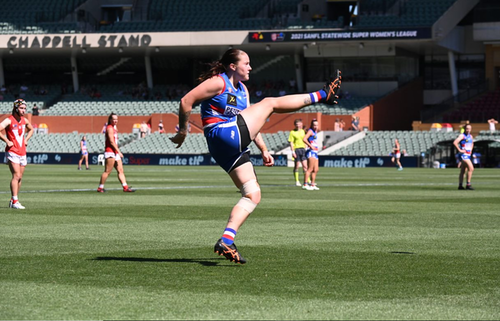 READYMADE mature-age talent is something AFL Women’s clubs are often searching for in order to fill needs, or potentially top up areas of depth that they can exploit at the elite level. Last year the South Australian National Football League (SANFL) Women’s contribution to the AFL Women’s Draft might have flown under the radar a little because of the view of the current zoning system, but a remarkable 10 players actually got drafted.

It might not seem like a lot in the scheme of things, but in an elite level league which is still not a full-time job, the fact that clubs across the country are taking advantage of the SANFL Women’s for it’s growth and development of talent is a huge tick for the competition and the eight clubs involved. Naturally Adelaide has a smorgasbord of options, picking up young gun Teah Charlton, along with mature-age talents Rachelle Martin and Ash Woodland, whilst another teenager in Indy Tahau went to Brisbane.

By the end of the AFL Women’s Draft, four players had been picked up from the SANFL Women’s. At that stage it might have looked like a low number, but then in came the rookie draft options, with all four free spots on club lists – Collingwood, St Kilda and West Coast (two) – were used on South Australians. North Adelaide duo Lauren Gauci and Amber Ward went to West Coast, Tahlia Meyer headed to the Saints, and Norwood’s Bella Smith teamed up with ex-Redlegs coach and mentor Steve Symonds at the Pies. They were not done yet though, with Sturt’s Georgia Bevan heading to Gold Coast and another North product Katelyn Pope joining her Roosters teammates at the Eagles as replacement players.

The reality is, there is too much South Australian talent to just be filtering into one team, and the other AFLW clubs are well aware of that fact based on the draft results. For players moving interstate, their relocation costs are covered for them if taken after the AFLW Draft, or in other words, if a state they do not nominate opts to select them. Hence only Tahau – who hand family in Queensland – would have needed to cover relocation costs. It is a win-win for clubs and players, with the extra spots available post-draft and mature-age talent being able to live out their dream even if it means moving interstate.

So with that in mind, let us fast forward to the 2021 AFL Women’s Draft. South Australia has two AFL Women’s Academy members in Zoe Prowse and Gypsy Schirmer. Prowse is clearly the standout ruck across the country in terms of this year’s top-age crop and not only that, her versatility to play forward and through the midfield makes her a terrific young talent. Schirmer might be a bit more raw, but her athleticism and attack on the contest, along with her forward ability and upside, make it easy to see why she was included in the AFLW Academy.

The Crows currently have four selections in the AFL Women’s Draft, though with Trade Week still underway, and list lodgements yet to be confirmed, there is still enough in play to be unsure of how many picks they take. West Adelaide’s Zoe Venning and Glenelg’s Brooke Tonon have put in a body of work this year, whilst the likes of South Adelaide’s Tahlita Buethke and Norwood’s Alana Lishmund have also impressed at different stages over the course of their junior careers.

One thing in the mind of South Australians is the fact that with the recent announcement of the AFL Women’s expansion to include all 18 teams, Port Adelaide is anticipated to potentially have a club entering the competition following the 2023 season, meaning players that are looked over even now, could well be considered for the Power in a couple of years time. With 18-year-olds in this year’s draft set to be 20-21 by the time the first round of AFL Women’s in 2024 starts – providing as expected Port does have a team – then they have built up some great consistent state league football in the meantime.

But rewinding back to the 2020 AFL Women’s Draft, we saw the likes of Martin, Meyer and Pope selected having missed out on multiple drafts prior, but then doing enough to suggest they could transition to the elite level. So, in 2021, who could be those players who have missed out on multiple drafts, ie. are – or turning – 20-years-old (or more) that have put in some great consistent efforts in the SANFL Women’s to be considered for the top level?

West Adelaide’s Sharni Whiting has to be near the top of the list. Not only is the key defender – who can play key forward – a lovely contested mark and booming kick, she has proven to do it on the big stage with a standout effort for the Bloods in their loss to Glenelg on the weekend. Whiting played all 14 games, averaging 14.6 disposals, 2.7 marks, 4.1 rebound 50s and kicked at an elite 89 per cent. As a readymade key position player, Whiting came out of the Western Jets and Williamstown, having played as a key forward in the VFL Women’s, and now predominantly key back in the SANFL Women’s. Turning 21-years-old in August, she could step straight into a side.

One-time Adelaide Crows key in Katelyn Rosenzweig continues to be a name who could make the step up again. Booting 11 goals in 11 games this season, the Central District prospect who turns 21 at the end of the month, is a readymade contested marking talent. In 2021, Rosenzweig averaged 11.6 disposals, 3.8 marks and 2.0 tackles per game, also taking a contested mark in every match she played, for almost two per game on average. For teams needing a target inside 50, she has the talent and strength to make a difference, but would be a sure target for the Power in a couple of years.

From a midfielder’s perspective, there are a couple of names – among many – that standout. A proven performer at the top level, Sophie Armitstead played four games for the Crows in the inaugural seasons, 2017-18. Injuries played a part in her short career, but she remains one of the more versatile players going around in the SANFL Women’s, averaging 13.4 disposals, 5.8 tackles, 3.7 clearances and 2.2 inside 50s, able to play just about anywhere. She turns 27 in October, so an older option compared to the other names, but one who could slot straight in.

The other midfielder who has also proven capable of playing in multiple positions is Glenelg’s Jess Bates. Making the SANFL Women’s Team of the Year and being co-captain in the Draft Central SANFL Women’s Team of the Year, Bates enjoyed a terrific second season in the competition, averaging 15.4 disposals, 2.2 marks, 2.2 inside 50s, 3.1 clearances, 1.7 rebound 50s and a massive 8.5 tackles. She is a two-way runner who can impact the play going forward, or winning the ball back from the opposition.

There are plenty more options across the competition who could easily make the step up, with the likes of Erica Greet, Isobel Kuiper and Tessa Kohn all making the starting midfield of the SANFL Women’s Team of the Year following fantastic seasons. Leah Cutting was the standout ruck in 2021, with Norwood’s Morgan Johnston another readymade defender with good composure and had her best season thus far.

Given the success of the SANFL Women’s in fostering talent to the elite level last season, it will be fascinating to see what happens in 2021.