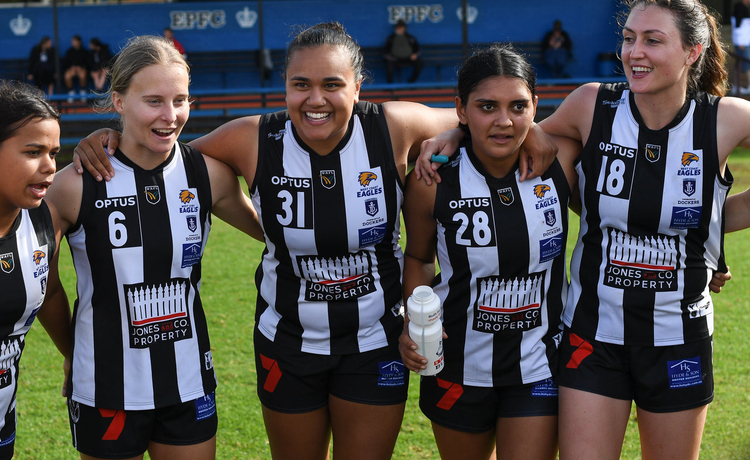 THE West Australian Football League (WAFL) Women’s competition returns for its 14th round of the 2021 season and the race for the finals is truly beginning to heat up. With just six rounds remaining, teams will be well aware that each contest has huge ramifications with time running out for teams to cement their spot on the ladder.

The round kicks off with a clash of the titans, as the undefeated Swan Districts travel to David Grays Arena to take on the second-placed – and reigning premiers – Peel Thunder on Saturday afternoon. It has been a talking point all season, but the Swan Districts have somehow managed to remain unbeaten after 13 rounds of action. They have stars across the ground and approach the game as good as any side in any league across Australia. Adam Dancey’s side have been the premier side of the 2021 season, and look like they will take a real challenge to beat. With players such as Dana East and Bianca Webb firing in last week’s massive win over East Fremantle, the competition heavyweights are in full flight and ready to take on any challenge in their path. That challenge comes in the form of the Peel Thunder this weekend, who have been quietly carrying out quite a strong season themselves. Losing just four of their first 13 games, the Thunder have been remarkably consistent throughout the season, and if their Round 14 opponents were not in the midst of a historic run, they would likely be considered premiership favourites once again. They look the biggest threat to Swan Districts, especially if forward Kira Phillips can maintain her impressive form around the big sticks. This will be the match of the round and is one to tune into on Saturday afternoon.

The two Fremantle sides will face off on the weekend, as South Fremantle travel to New Choice Homes Park to take on East Fremantle on Saturday afternoon. South Fremantle will head into the clash as clear underdogs, having not registered a win so far this season, but will be sniffing an upset here if they can get on top of their opponents early. Despite looking well off the mark so far this year, South Fremantle will be as desperate as ever, and will not be short of motivation when given the opportunity to take down their cross-town rivals. East Fremantle have found themselves just two wins outside of the top four, a task they know is achievable, but they’ll need the scoreboard impact of Chloe Reilly and Madeline Ross to be firing as they did in Round 12.

The final match of the round will also likely prove entertaining viewing for fans, as Claremont will play host to Subiaco at Revo Fitness Stadium on Saturday afternoon. Subiaco have been one of the form teams of the competition, winning four of their last five matches, and that loss reasonably coming to the Swan Districts. That loss came by just a solitary point, so Subiaco have the runs on the board, but they face a tough task in Claremont this week. Claremont finally found themselves back on the right side of the results with a win in Round 13 after a massive losing streak. When they’re on, they can beat plenty of teams, and they will certainly be brimming with confidence this round. These two sides have had contrasting months, but who knows what will happen when they lock horns on Saturday afternoon.