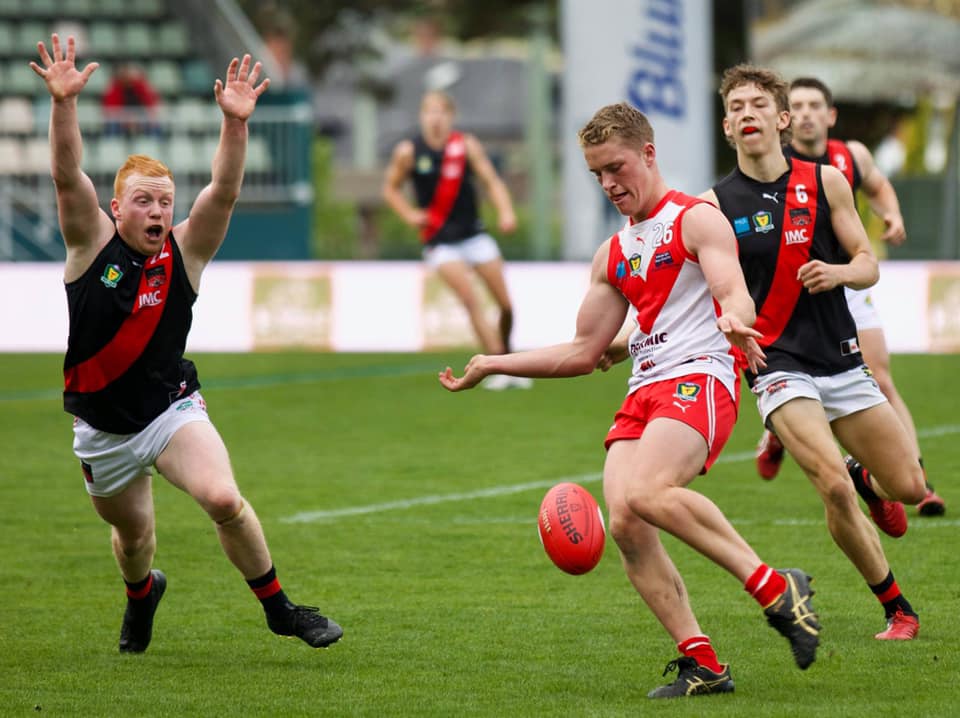 WITH the Victorian Football League (VFL) once again on hold due to the ‘circuit breaker lockdown’ extending across metropolitan Melbourne, footy fans can turn their attention to the remaining leagues, with an exciting round of football action ahead. Teams will look slightly different, with the AFL mid-season draft claiming some of the league’s brightest.

The SANFL will resume for its ninth round of action as the finals race really starts to heat up. Proceedings will kick off at X Convenience Oval, as the Central Districts Bulldogs hope to cause an upset when they host the Woodville-West Torrens Eagles on Saturday afternoon. The Bulldogs will be bolstered by the inclusions of Justin Hoskin and Kyle Presbury, but still face a tough task taking down an Eagles side that is firmly in premiership contention. Increasing their chances is the loss of Eagle Jimmy Toumpas, who suffered concussion in Round 8 and has been forced to miss the clash.

The Adelaide Crows will travel to Prospect Oval, where they will take on the North Adelaide Roosters in an enticing clash on Saturday afternoon. With just one win separating the sides, the Crows will be looking to bolster their position on the ladder with a win, but the Roosters will be aware that if they can triumph, they will be in a much better position to enter the top five in coming weeks. The Roosters will welcome back Billy Hartung from a groin injury, while Karl Finlay will play his first game for the season and Kaine Mercovich will play his first senior match. Adelaide will unleash the club’s mid-season draft pick, with 19-year-old Patrick Parnell named on the half-back flank.

Over at Hisense Stadium, the South Adelaide Panthers will be hoping to close the gap between them and the first-placed Glenelg as they take on the West Adelaide Bloods on Saturday afternoon. The Panthers have had a less-than-ideal start to the season, but are capable of upsetting any side on any given day, so this is far from a certainty. West Adelaide will unveil a debutant, with defender Hayden Elliot set to lace up the boots for the first time, while Reece Milsom returns for the Panthers on a wing.

Glenelg will be looking to keep its remarkable winning streak rolling with a win against the Norwood Redlegs at Coopers Stadium on Saturday afternoon. Glenelg are still yet to lose a game, and given they have nearly played the entire competition, it looks unlikely that this will change in the near future. Norwood will be boosted by the return of skipper Matthew Nunn in the guts, but have lost key forward Jackson Callow to Hawthorn in the recent draft. Glenelg may enter the clash unchanged, given their strong win over the Crows last week.

The WAFL looks set to rock and roll this weekend for the ninth week of football action. Claremont will have the opportunity to draw level with top-placed Subiaco if they can defeat West Coast at Revo Fitness Stadium on Saturday afternoon. If they can walk away with the win as expected – given West Coast’s struggles this season – they will only be sitting in second-place on percentage, a factor that can be increased as the year progresses. To make matters worse, West Coast’s AFL side has been struck by injury, and the guns of their WAFL team have been recalled, while Claremont are yet to confirm any changes.

The QAFL is back for Round 10, with the round kicking off at Subaru Oval, with Broadbeach hosting Palm Beach Currumbin on Saturday afternoon. Broadbeach’s season to date has gone just about perfectly, not dropping a game in their first seven matchups, and finding a style of game that has proven to win matches. Forward Jordan Moncrieff has booted 25 goals in the last three games, so expect him to hit the scoreboard again. Palm Beach Currumbin have registered just three wins this season, but are fresh off a 27-point triumph over Sherwood Districts, so they could fancy themselves in this clash.

Maroochydore Multisports Complex will be home to a thrilling matchup, as fourth-placed Maroochydore host fifth-placed Surfers Paradise on Saturday afternoon. With just one win separating the two sides (Maroochydore have also played one more match), this game could go down to the wire, as the winner of this match should announce themselves as one of the contenders of the league. Thompson Smith booted four goals in a best afield display for Surfers Paradise last round, so keep an eye on his impact during this match.

Noosa’s next chance to claim their first win of the 2021 season comes this weekend, as they travel to Totally Workwear Park to take on Redland-Victoria Point on Saturday afternoon. It would need to be a significant turnaround in effort and execution, but Noosa can only play the teams in front of them, and will be aware that all of the pressure will be on Redland-Victoria Point to take home an easy win in this matchup. Alex Laskey has been Noosa’s strongest performer this season, so look forward to a big individual performance once again.

Over at Sherwood Oval, the Sherwood Districts will play host to Morningside, as the two sides face off on Saturday afternoon. The home side has struggled this season, winning just three of their first eight games so far, and face a tough task taking down a Morningside side that has lost just one game so far this season. It appears to be a one-sided affair, but don’t rule out Sherwood Districts in this contest, especially if Thomas Baulch can continue his strong form in front of goal.

The final contest of the QAFL’s 10th round of action will take place at Hickey Park, as Wilston Grange host Mt Gravatt in a big clash on Saturday afternoon. Both sides are sitting down at the bottom of the ladder, so a win here would be crucial in getting a season back on track. Both teams will be aware of the stakes during this clash, so expect a passionate contest. Mt Gravatt’s Frazer Neate played his strongest game of the season last round, so it will be interesting to see if he can back it up again this weekend and claim a win.

The TSL’s 10th round of action will kick off with a fantastic matchup, as Lauderdale take on Glenorchy at KGV Oval on Saturday afternoon. Both sides have struggled to start the season, but Saturday’s clash provides a perfect opportunity to amend this for the winning team. Glenorchy will be without ball-winner Sam Rundle, while Lauderdale have again lost the services of ex-Lion and skipper Allen Christensen, so both sides will be far from full-strength, but it should still make for an even contest.

That match isn’t the only blockbuster this weekend, with North Launceston hosting Clarence at UTAS stadium as the two sides clash on Saturday afternoon. Both sides sit on six wins and are only separated by percentage. One of the biggest factors heading into this match is the location, as Clarence are one of the strongest home sides this season, but face a tough challenge taking on North Launceston on their home deck. Clarence will be boosted by the return of ex-Dee Colin Garland.

The final match of the round will see Launceston attempt to redeem themselves from Round 8’s loss to North Launceston, with a win as they take on the Tigers at Twin Ovals on Saturday afternoon. The Blues will still head into the contest as heavy favourites, but the Tigers will be smelling blood now that their opponents are seen as beatable. Keep an eye on Launceston debutant Liam Jones, who has been named to line up on the ball.