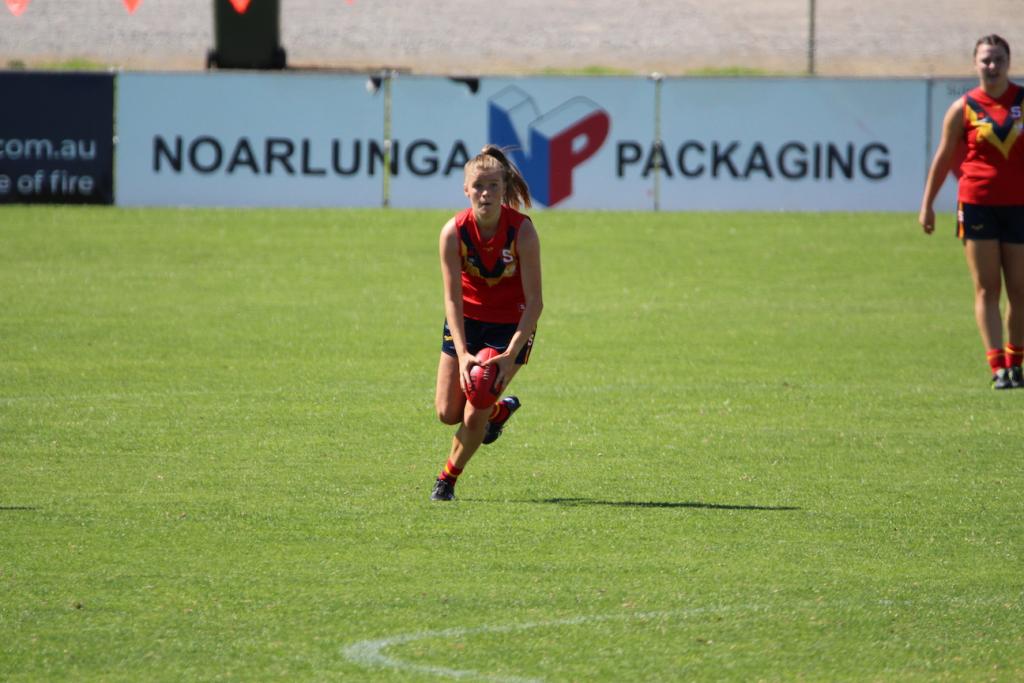 WHEN Sturt teenager Hannah Prenzler was told she would be leading South Australia out against Western Australia at the 2021 AFL Women’s Under 19 Championships, the natural leader said she was equally shocked as she was honoured to be handed the co-captaincy alongside SANFL Women’s teammate, Georgia Swan.

“Totally shocked when I got announced captain, but I feel very honoured from both the coaching staff and the girls voting me in,” Prenzler said. “I love to show leadership, but I believe everyone’s a leader in the team and everyone could have done the role so well, but it’s pretty awesome to be able to captain the state, and as a standalone for the first time which is pretty cool.”

Prenzler’s journey to captaining her state started off as a young aspiring footballer who had some roadblocks along the way in continuing the pathway, but when she was able to join her beloved Double Blues, the leadership group member quickly switched her focus to the oblong ball game.

“I started off playing Auskick when I was pretty young,” Prenzler said. “There wasn’t really a massive pathway for girls football (and) I really enjoyed my basketball, so basketball all growing up as a kid. “Then about four or five years ago played a bit of school footy and then trialled for Sturt Under 17s and being at Sturt ever since.”

When asked how she had found the two teams seasons with Sturt in the SANFL Women’s, and South Australia in the AFL Women’s Under 19 Championships, it was no surprise that Prenzler took a team-orientated approach.

“For the SANFLW as a team, Sturt’s not doing as we would have liked to, but it’s good to get back after a year of mixup last year, so obviously as a team we’d love to do better,” Prenzler said midway through the championships. “For the State Team, I think we had a great first game up against WA which was really good, tougher game against Vic but I think it was expected, they’re definitely the team to look out for and I reckon the best, but still great fun, I really enjoyed it.”

As for her own personal performances, Prenzler said she had an up-and-down season with some good individual games, and some quieter ones. She was hoping to improve her run and carry to do it more consistently, whilst also building her endurance to add extra kilometres “under (her) belt”. Considering her kick as one of her strengths, Prenzler enjoyed playing in defence for both levels of football, but admitted she had to step up at the championships as an undersized key defender.

“Definitely in the defensive six for both teams,” Prenzler said. “Sometimes in this state team either a full-back or centre half-back switching as a bit more of a taller player which is more of a shock because I don’t consider myself that tall but I guess in this program, but anywhere in the backline is where I sit.”

As a South Australian, Prenzler follows the Adelaide Crows in the AFL Women’s and said there were a number of talents on field that she admires, and has also been lucky enough to play against some of them in the SANFL Women’s at times.

“As a similar position wise, I reckon Sarah Allan (is a player Prenzler looks up to),” she said. “Great defender, composed with it, has a really good kick.” Able to run through to the backline to deliver up and then I guess girls like Chelsea Randall and Ebony Marinoff for their gutsy work.”

In terms of off-field inspirations, Prenzler could not go past the “popular” choice of parents, with the support network allowing her to follow her dreams. In particular, the Sturt talent said her father had helped with the football side of things, aiding her growth and development alongside the variety of coaches she has had coming through the pathway. As for her future ambitions outside of chasing her ultimate goal of getting the most out of football, Prenzler said she was happy with juggling university and sport.

“I finished Year 12 last year and first year uni, I’m doing nursing, so I’m enjoying that,” she said. “Thought I wanted to do something completely footy related but want to save that as a hobby, so something in the health medical field. “I’d love to travel a bit, but obviously with the restrictions, I’m focusing on uni and footy.”