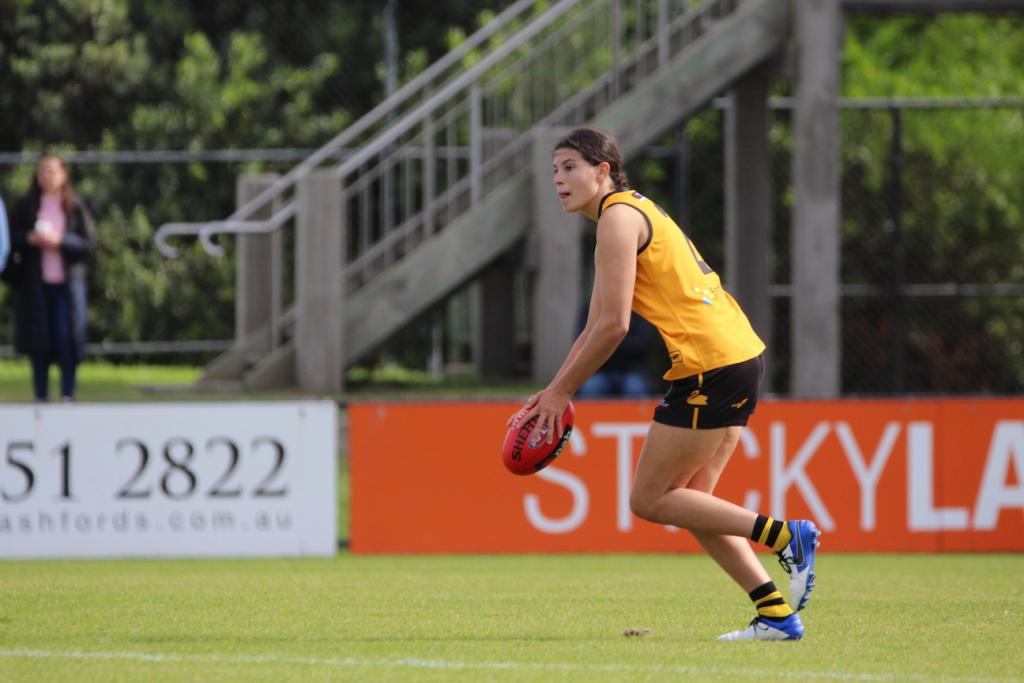 PLAYING a crucial role in her sides win against South Fremantle, WA’s Amy Franklin continued what has been an impressive year where she has announced herself as one of the top WA prospects in the upcoming 2021 AFLW Draft. A representative at Under 19’s level for WA in the recent National Championships, Franklin has shown consistently she can play up either end to great success, an aspect of her game which is sure to see either of Fremantle or West Coast more than happy to bring her onboard. With the WAFLW season coming to a close shortly, and Claremont needing the win as they prepare for some difficult fixtures against fellow top 4 sides Subiaco and Peel Thunder, Franklin was placed up forward and through the ruck for the game.

One of the most highly rated WA Draft Prospects for the 2021 AFLW Draft, Franklin is a tall player capable of playing as a Defender, Ruck or Forward, making her a valuable asset to any team she’s apart of given her versatility. This versatility saw her fill roles as both a Key Position Defender and Forward in the recent NAB AFLW U19 Championships, when WA clashed with the Allies and VIC Metro. Some of Franklins most impressive traits are her athleticism for her height, with her speed, agility and leap all high level and her marking, especially above head, complimenting her preferred position as a Key Position Forward.

Starting the quarter inside 50, Franklin was up the wrong end to have an impact early as South Fremantle controlled the play to keep it in their forward half. She followed her opponent up the ground and laid a smother to stop the ball getting sent back inside defensive 50 about four minutes in. Her first bit pf possession resulted in the first goal of the game, taking advantage of some quick ball movement from Claremont to take an overhead mark just behind her opponent, an impressive grab for the wet conditions, and kicked truly to put it straight through the middle. In the latter stages of the quarter she moved into the ruck, coming up against fellow WA Under 19’s representative Lauren Wakfer, with neither able to get a clear win in the contests they were against each other for.

Ending the quarter with 1 kick, 1 mark, 1 goal and 1 hitout it was not a quarter with big numbers for Franklin, but there is no doubting she had a big impact at times.

A similar quarter positionally to the last, Franklin started in the forward 50 early and then moved into the ruck, back into the forward 50. Was more involved overall in the second, pushing up the ground early and getting two handballs up on the wing, where she won it on the inside and then got it out to teammates running past. She then reaped the rewards of some hard work by Claremont, where there was a turnover forced through pressure in the forward 50, and she got the handball from a teammate and snapped her second for the game from about 35 out, then running to the bench for her rotation. Came back on as a Ruck and competed well against Wakfer, winning one hitout where she collected it at ground level and kicked it long for the clearance.

Finishing with 3 Kicks, 3 handballs, 1 clearance, 1 goal and 2 hitouts she certainly had higher numbers in the second quarter, but her willingness to go in and compete for the contested footy was particularly impressive and gave Claremont some additional strength at ground level in the forward half.

Impacted mostly by the team looking to take advantage of the wind and bomb it long, Franklin was often in a good position for a handball around contests in the forward half but was rarely used. She also looked to push up the ground a bit more in the third, providing as a switch option at one stage, where she got used and quickly sent Claremont forward with a well placed kick. Positioned well just outside the 50-metre mark when it was locked in the Claremont 50, being around the ball as it spilled out and getting the one kick the set up a scoring opportunity

Collected the 2 kicks, 1 handball, 1 mark and 1 tackle in the third where once again she was thrown about from forward to ruck, and spent more time on the bench than she had done in the previous two quarters.

Looking dangerous early, Franklin was unfortunately forced off for an extended period due to what appeared to be a rolled ankle but powered through to come back on and get a few more touches. What was most impressive was her ability to hold her feet in a groundball contest, which lead to the injury, but was showed good strength and endeavour to remain standing. Once again got into the right spots but unfortunately wasn’t used even when she was the best option.

Franklin collected 3 handballs and 1 mark in the final term despite the reduced time on ground and not getting her usual run through the ruck, with her handballs again looking to find teammates already on the run and placed in front of them.

For a player positioned mostly as a Forward, Franklin had a respectable showing with her stat line, maintaining a consistent impact on the game with her roaming up the ground on the wings, trying to present as a switch option for her teammates. When she was used her ball use was good, whilst not always hitting teammates directly is was always put to their advantage so that they could run onto the ball and collect it easily. Franklin was not used as the main target inside 50 which certainly gave her less opportunity than she could have gotten, but it was obvious the opposition were wary of her, playing Fremantle listed Mim Strom on her at various stages of the game. Franklin’s athleticism for her height is obvious, with her agility one of her more impressive traits for the game.