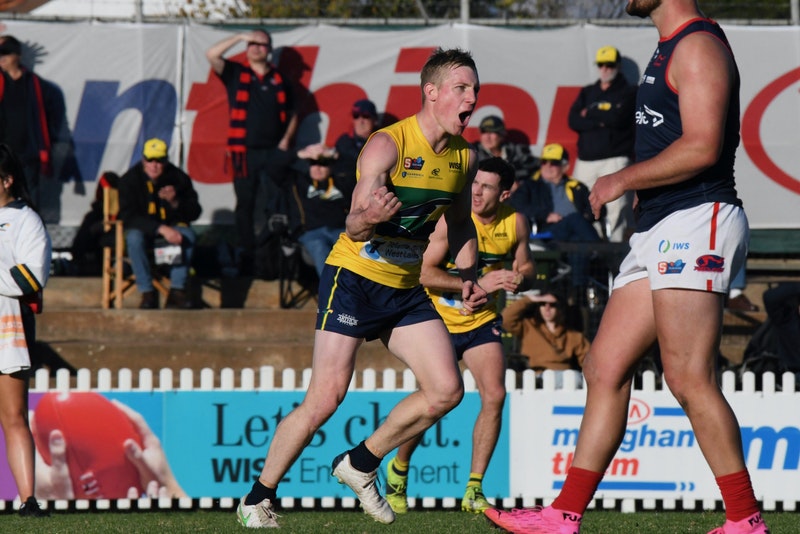 DESPITE the absence of Victorian Football League (VFL) action due to a statewide lockdown imposed on Victoria, the remaining leagues went ahead with business as usual, providing plenty of entertaining football action.

The SANFL kicked off its eighth round at Flinders University Stadium, where the South Adelaide Panthers proved too strong for Central Districts, running out winners by 27 points on Saturday afternoon. Despite only two points separating the sides at the final break, a six-goal final term from the Panthers was ultimately the deciding factor, as they grabbed their sixth win of the year, keeping them in second place, behind the undefeated Tigers. Panther Bryce Gibbs was far and away the best player, racking up 36 touches in the midfield, laying six solid tackles and booting two goals in a dominant display from the ex-Crow. For Central Districts, Harry Grant found plenty of the ball with 25 touches for the match.

At Maugham Thiem Kia Oval, Woodville-West Torrens ran away with a nice 47-point win over the Norwood Redlegs on Saturday afternoon. The Redlegs burst out of the gates, taking a two-goal lead into quarter time, but the Eagles kicked 11 goals to two in the remaining three quarters to nab a win that saw them rise up the ladder. For the victors, Riley Knight continued his strong season with 27 disposals and 10 marks through the midfield, while teammate Angus Poole booted three goals from his 21 touches. For the Redlegs, ex-Crow Richard Douglas fought hard with 29 disposals and a goal.

Prospect Oval was treated to a thrilling win for the home side, as North Adelaide escaped with a three-point win over the Sturt Sabres on Saturday afternoon. A late charge from the Sabres looked as if they might be able to steal an unlikely victory, but a late shot on goal from Sabre Daniel Fahey-Sparks didn’t register a major score, and the result was all but sealed. For the winning side, midfielder Campbell Combe put in an outstandingly tough performance, finishing the match with 25 disposals, five clearances and a massive 15 tackles. For the Sabres, Casey Voss worked tirelessly all day on his way to 28 touches and a goal.

Glenelg’s season remains perfect and they do not look like slowing down at all, following their 89-point belting of the Adelaide Crows at ACH Group Stadium on Saturday afternoon. The Crows looked no match for their opponents, who were able to do as they please for all four quarters. Tigers forwards Luke Reynolds (five goals) and Liam McBean (four goals) were fantastic up forward, constantly giving teammates such as Matthew Allen (33 disposals) an option with the ball in hand. For the Crows, skipper Matthew Wright tried to lead his side as well as he could, finishing with 30 touches on a tough day.

The final SANFL game for the weekend saw Port Adelaide claim a strong win over West Adelaide at Alberton Oval on Saturday afternoon. A strong third term saw the Power break away from their opponents, who had been impressive in their efforts to match the home side around the contest, but the class of Port Adelaide ultimately got them over the line. For the victors, midfielder Sam Mayes was instrumental around the contest, finishing the match with 30 disposals and seven clearances as he gave his side midfield ascendancy. For West Adelaide, Kaine Stevens fought bravely around the ball, finishing the match with 33 disposals and a goal.

The WAFL kicked off their eighth round of footy at Leederville Oval, where Subiaco were able to snatch top spot on the ladder with a 44-point victory over the Peel Thunder on Saturday afternoon. The strong margin saw the victors gain enough percentage on the ladder to move up to premier spot on the ladder, as their opponents struggled to keep up with them, especially after a five-goal to none opening term. For the winners, Lachlan Delahunty was a clear standout, doing it all to finish the match with 30 disposals, 16 hitouts and seven inside-50’s in a strong outing. For the Peel Thunder, Reece Conca was great from the backline, racking up 27 touches while denying his opponents the ball.

Heading to Revo Fitness Stadium, Claremont were clinical in their 39-point victory over East Perth on Saturday afternoon. The game was reasonably even in the first half, with just one point separating the sides at the main break, but Claremont were able to turn it on in the second half on their way to their sixth win of the season. Claremont were led from the midfield, especially by Jye Bolton who finished with 34 disposals and nine inside 50’s in a strong attacking game. For East Perth, Angus Scott found plenty of space, racking up 34 touches and nine marks of his own.

At Fremantle Community Bank Oval, South Fremantle got their offensive game-plan rolling, storming away from West Coast to claim a 66-point win on Saturday afternoon. The Eagles have struggled to string together solid play all year, and South Fremantle took full advantage of that, especially in the second quarter where they booted seven goals in a dominant term. For the victors, Jimmy Miller booted five goals in a powerful display up forward, while former Saint kicked four goals from 26 disposals. For the Eagles, Xavier O’Neill tried to get his side going from the midfield, finishing with 24 touches and 10 inside-50’s.

Swan Districts grabbed a crucial round eight win, taking down East Fremantle to the tune of 44 points at Steel Blue Oval on Saturday afternoon. With both sides entering the clash with the same record, Swan Districts virtually determined the result of the game in the second quarter, where they booted eight goals to claim a commanding lead that they would never end up surrendering. For the winning side, ruckman Corey Gault caught the eye with his 19 disposals, six tackles and 36 hitouts in an impressive display, while Cameron Eardley was the strongest performer for East Fremantle.

In a low scoring affair, Perth were able to walk away with a 10-point win over West Perth at Provident Financial Oval on Saturday afternoon. Both sides were made to pay for their inaccuracy in a close contest, but Perth’s strong third term was ultimately telling in determining the result of the game. For the winning team, Corey Byrne was a standout in the midfield with his 30-disposal performance while Aaron Black found the ball 32 times for West Perth.

There were plenty of big scores in this weekend’s QAFL action, starting at Rococo Oval, where Broadbeach hammered Noosa, running out winners by a whopping 113 points on Saturday afternoon. The game was ultimately decided by quarter time, where the winners already held a 33-point lead, and they would only improve from here. For Broadbeach, Jordan Moncrieff continued his strong run of form in front of the big sticks, booting six majors in a damaging display. For Noosa, Will O’Dwyer played a lone hand up forward, booting four of the team’s six goals.

In another blowout, Labrador claimed a strong 78-point win over Wilston Grange at Cooke-Murphy Oval on Saturday afternoon. The victors were able to do as they pleased, and after a strongly contested first term, Wilston Grange were soundly beaten around all areas of the ground. For Labrador, Thomas Meagher was outstanding, booting three goals and finding plenty of the ball in a great display. For Wilston Grange, Zachary Stanton played his best game of the year despite the tough day for his team.

A big final term has seen Morningside claim their sixth win of the year, by defeating Maroochydore by 22 points at Jack Esplen Oval on Saturday afternoon. With the match tied at three quarter time, the result looked as if it could go either way, and Maroochydore had all the momentum following a strong third term. Morningside were able to storm home, booting five goals to one in the final term to secure the result. For Morningside, Thomas Jeffery was clinical, booting three goals up forward in an influential display, while Maroochydore were well-led by the in-form Jacob Simpson.

Moving to Salk Oval, Palm Beach Currumbin were able to work their way to a 27-point triumph over Sherwood Districts on Saturday afternoon. The win was set up in the first half, where they took a whopping 45-point lead into half time, and were able to cruise to their third win of the season and climb up the ladder. For the victors, Jonathan Croad was once again impressive, finding plenty of the ball and leading his side from the front. For Sherwood Districts, Toara Marango put in his best performance of the year despite the loss.

The final match of the round saw Surfers Paradise claim a nice 24-point win over Mt Gravatt at Sir Bruce Small Park on Saturday afternoon. The game was fought evenly in the first half, with just five points separating the sides at the main break, but Surfers Paradise kicked away in the third term to grab their fourth win of the season. For the winners, Thompson Smith was everywhere, booting four goals and making the opposition pay on the scoreboard, while Frazer Neate led the way for Mt Gravatt.

TSL:
The ninth round of TSL action began at Blundstone Arena, where Clarence dominated their opponents on their way to a 68-point win over Glenorchy on Saturday afternoon. Clarence have proven tough to beat on their home deck all year and this match only escalated these fears for opposing sides. Clarence midfielder Jack Preshaw was his side’s best, finding plenty of the ball around the ground and constantly making his opponents work both ways. Glenorchy’s Cooper Meredith fought hard all day in tough conditions.

A remarkable match-winning goal from Riley Ashlin SAW the Tigers steal a four-point win over Lauderdale at Lauderdale Oval on Saturday afternoon. With only seconds remaining, Ashlin snapped an incredible goal from the pocket to give his side the match-winning lead and escape a shock loss. Ashlin was also one of his side’s strongest performers on the day, so it was only fitting that he deliver the win for his team.

North Launceston have continued their strong push for top spot on the ladder, with a 20-point win over North Hobart at North Hobart Oval on Saturday afternoon. The Demons competed well for most of the match, and threatened to cause an upset, but the Bombers were able to turn it on and burst past their opponents to put them dangerously close to claiming the premier spot on the ladder. Bomber Jack Avent impressed as he has done all season, while Sam Caswell continued his strong form from last week for the Demons.