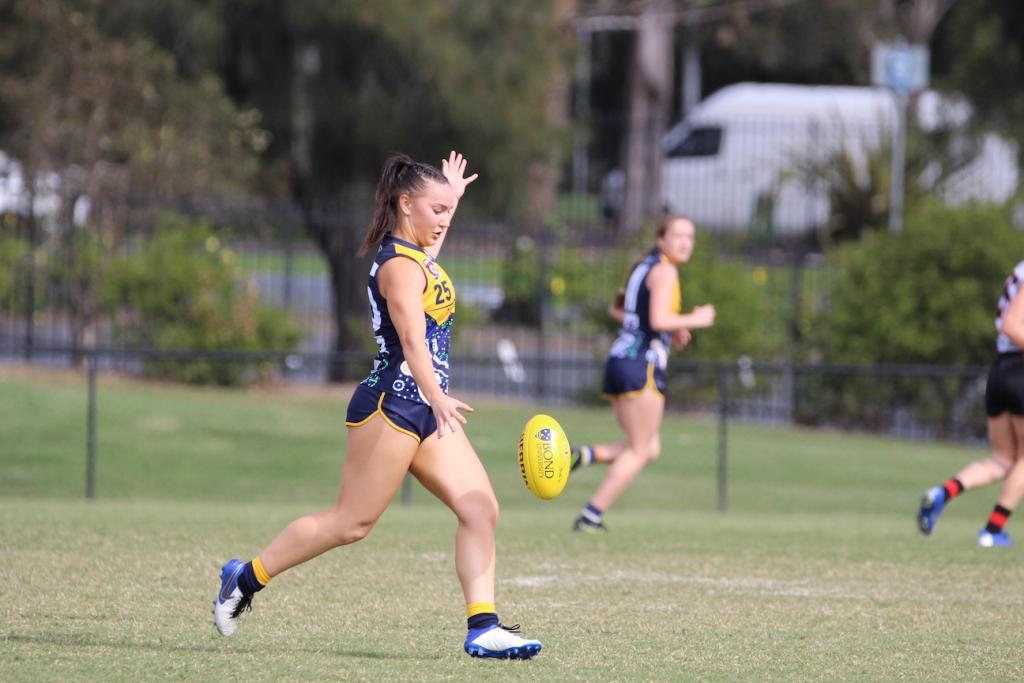 WITH the Under 19s AFL Women’s National Championships match against VIC Metro being delayed from the weekend due to the COVID-19 outbreak, the QAFL Women’s was treated to a plethora of Queensland state representatives returning to their sides, with Bond University welcoming back AFLW National Academy and Brisbane Lions Academy member Mikayla Pauga against reigning premiers Yeronga South Brisbane, looking to keep their undefeated start to the season continuing.

Pauga is one of the leading Queensland prospects for the 2021 AFLW Draft, often splitting her time between the forward line and midfield, she uses her clean skills, particularly her quick hands, to compliment her stoppage work, able to spot out her loose teammates and put the ball in an advantageous spot for them to run onto. Her work off the ball is also a staple of her game, working hard to lay tackles, apply pressure and force mistakes on the inside, but also looking to control the corridor and provide meaningful leads as a forward, where she gets separation through her game sense and delivers the ball well by foot afterwards. Usually pushing up the ground as a forward, she’s also handy closer to goal, with 14 goals in her 10 QAFLW appearances, including a haul of four. Pauga chimed in with 11 disposals for the U19 AFLW National Championship game against VIC Country, bringing those midfield strengths to the game.

ROUND 12 QAFLW vs YERONGA SOUTH BRISBANE

Starting the game in the forward line, she got involved early being the intended target off the first clearance, leading to the top of the 50. The ball went over her head, but she beat her opponent to it on the way back, taking the shot that drifted just to the right for a behind. About a minute later she would take a mark in the centre of the ground, kicking it well to her teammate just outside of 50, unfortunately unable to mark. The next few disposals came under pressure, with her next kick pretty impressive given she managed to escape three opponents to put it inside 50. In the latter stages of the quarter she managed to intercept a kick from fellow U19 Queensland representative Christine Okesene, following up with a great handball to an oncoming runner that resulted in Bond’s third behind.

Ending the quarter with; 5 kicks, 4 handballs, 2 marks, 1 clearance and 1 behind, Pauga really should have had more of the ball given the leads she made and how hard she worked forward of the ball to be an option, often creating separation on the lead and streaming through the middle, just not being used as Bond looked to play closer to the boundary moving forward.

Once again in the forward line, Pauga was put on a bit of a tighter leash from Yeronga, who seemingly looked to negate and limit her movement off the ball, not giving her an inch around the play, and sticking right on her as she attempted to make leads like she did the previous quarter. All her earliest work was in the forward 50, pressuring opponents and forcing turnovers that she rarely saw the reward for effort from the pressure. Her most impressive play of the quarter came from her controlling the corridor, able to get onto a ball handballed over the top in transition and deliver well inside 50, unfortunately seeing the mark dropped and punched over the boundary line.

Overall it was a quiter second term on the stats sheet for Pauga, finishing with; 2 kicks, 2 handballs and 2 tackles, although the same work off the ball and effort to control the corridor of the ground was present, with her getting more into it later in the piece when she had found ways to deal with the tighter opponent.

Another quarter of ‘almosts’ for Pauga as she one again drew attention from the opposition, at times having two players dedicated to stopping her off the ball when Bond were in transition, so despite continuing to look to control the corridor and be a link up player, working hard with her leading, she was rarely the best option given the opposition attention. She looked to work harder defensively, pushing up the ground and impacting contests with her pressure work, even managing a spoil and forcing opponents to work hard to mark as she looked to push them out a bit. Still had her highlight moments in the forward 50, with the speed and accuracy of her handballs to oncoming runners giving Bond plenty of opportunity to score.

Getting a return of 3 handballs did not quite do her efforts justice, but it was another quarter where she worked hard and would have earned plenty of praise from teammates and coaches.

Started well in the fourth, being rewarded early for a lead very similar to the ones she had been doing all game, where she followed up with a centring kick that gave Bond the entire 50 to kick into. The kick itself was a darting sort that hit her teammate, showing her class by foot. The next bit of play saw her used by a teammate, running toward goal and then delivering the ball high for a pack inside 50 where she realistically could’ve gone for goal. The one time she was allowed space alone she picked the ball up with ease and passed it off to an outside runner to deliver inside 50, showing why she so often had an opponent hanging on to her.

Pauga had a performance that any forward would be happy with, when you add the amount of attention she drew from the opposition after the first quarter it was a superb performance, as she worked hard to move up and down the ground to provide a meaningful option, especially in the centre corridor. Her ability to keep her hands free and fire out quick and piercing handballs to teammates that were in space was a big part of her game, and especially inside 50 it led to scoring opportunities that unfortunately were not rewarded. Her kicking was also a class above, always placed to the advantage of her teammates and more often than not looking to put it into central spots to open up the play ahead. Although likely due to the role she was playing, she wasn’t going in and winning contested ball as often as she has done in the past, especially the U19 Championships, much more inclined to wait out the side or back of the contest and try to receive the ball from a teammate.