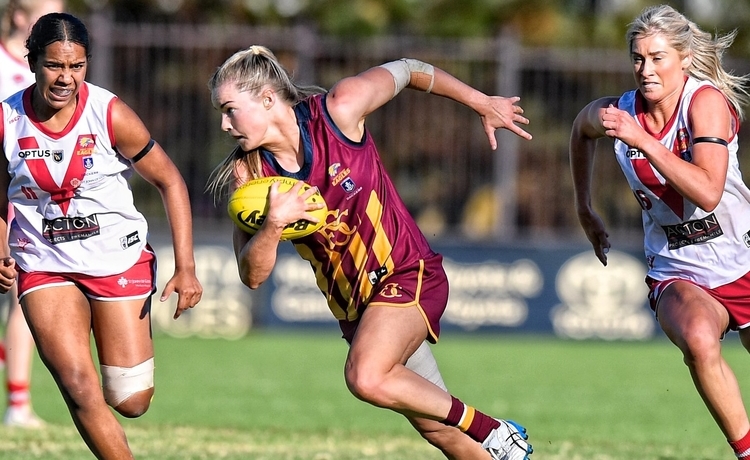 CLAREMONT have found themselves back on the West Australian Football League (WAFL) Women’s winners list, following their 29-point triumph over a struggling South Fremantle side at Fremantle Community Bank Oval on Sunday afternoon. Claremont found themselves on a shock losing streak that stretched to four games, and heading into the game, there were concerns that an upset could have been brewing. This would have sent shockwaves through the league, given South Fremantle are yet to register their first win of the season, heading into this matchup with a 0-12 record. These concerns were all but thrown out early into the second half, with Claremont gaining a strong lead in the third term, and never turning back.

The game started in scrappy fashion, with the wet conditions playing a big part in this. The centre circle was turned into a mud pile, and the style of play reflected this. Hard tackles came from both sides, and it took some time for Claremont to find their groove. As the quarter progressed, Claremont began to be cleaner with the ball, as players such as Jessica Low and Tessa Doumanis slicing their way through packs, and it was Amy Franklin who reaped the rewards on the scoreboard. Claremont headed into the first break with a healthy 10-point lead, thanks to a late goal from Amber Goodwin-Wissink. South Fremantle started the second term with some promising signs, such as a great run-down tackle from Aaliyah Ugle that likely saved a goal. Unfortunately, all the hard work they put in defensively went to waste when they couldn’t move the ball up the field successfully. Towards the end of the quarter, the rain began to have a big effect on the game, with the heavy downfall resulting in slower play. Franklin booted her second for the half, as Claremont’s lead extended to 15 at half time.

The third term saw quite a standoff, with the first score not registering until there were just seven minutes to go in the term, as Low’s set shot pushed to the right. Shortly after, a nice set shot from Doumanis saw the lead extend, and suddenly South Fremantle players began to drop their heads. The game began to get away from them, and once again, the bottom-placed side struggled to get the ball past the wing. Their backline was put under constant pressure and while they repelled many attacks, Franklin’s third goal of the match and Doumanis’ second sealed the result, as Claremont finally got their season back on track with a much-needed win.

For the victors, Franklin was a constant threat in the forward-50, with her three majors proving vital on a day where scoring was tough to come by at times. Doumanis was also a standout, with her agility on display, despite the slippery conditions. Her ability to sidestep opponents and zip through packs was fantastic to watch. For South Fremantle, Ashleigh Little battled hard through the middle, laying solid tackles and gathering plenty of contested possessions.

Around the grounds, Swan Districts have continued their remarkable undefeated run, getting the better of East Fremantle and running out 49-point victors at Steel Blue Oval on Saturday afternoon. Mikayla Hyde booted three goals for the winning side, while teammate Abbygail Bushby added two goals, and Stephanie Cain impressed. For East Fremantle, Phillipa Seth battled hard all day.

The final game of the round saw Subiaco live up to their title as the most improved team in the competition with an impressive 15-point triumph over Peel Thunder at Leederville Oval. Subiaco midfielder Hayley Miller was her side’s best, driving the ball inside 50 plenty of times, while teammate Lara Filocamo also performed strongly. For Peel Thunder, Sabreena Duffy was the standout.