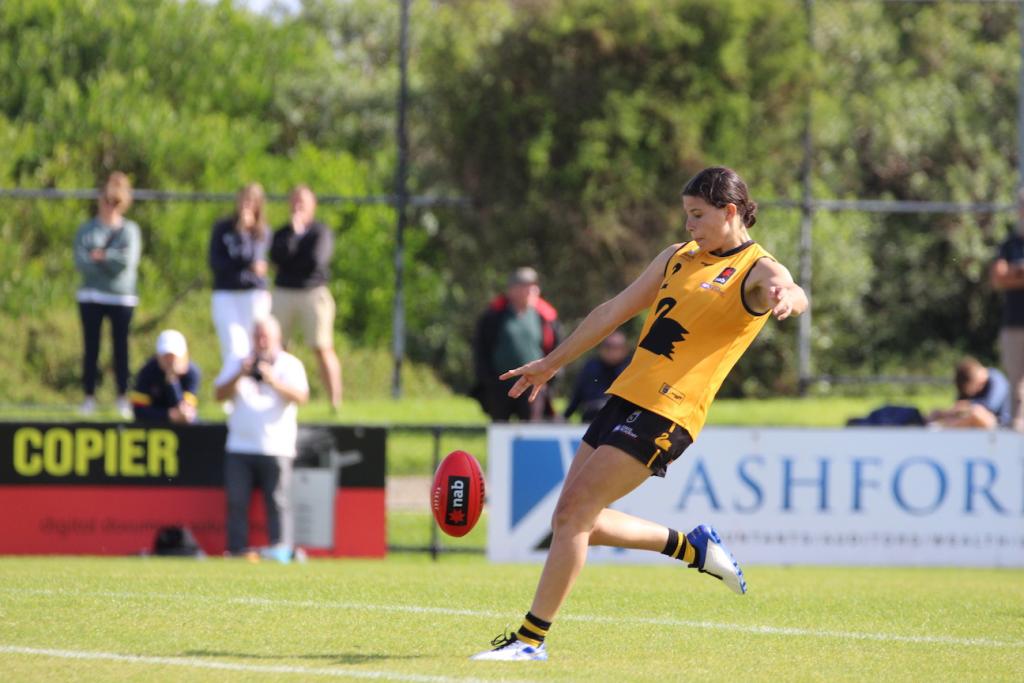 THREE years ago, Amy Franklin did not even realise that there was a women’s football club in her area. Had it not been for the chance suggestion from a classmate that Franklin join her local club, then the AFL Women’s National Academy member and State Academy representative might not have ever taken up the code.

“Back in 2018 a girl who recently just moved to my school, I barely knew her, she came up to me and said ‘hey do you want to come play for our local footy club?’, Franklin said. “I thought she meant soccer, and she said ‘no AFL’ and I didn’t really realise there was such thing as a women’s footy club and so I went down there, tried it out, and I just loved it. “I just loved the environment, the girls and the sport.”

Fast forward a few years and Franklin is thriving at both ends for Claremont Women’s Football Club in the West Australian Football League (WAFL) Women’s competition, earning a place in her state side for the AFL Women’s Under 19 Championships. It was little surprise to see her included, having been named in the National Academy for the 2021 season after an impressive bottom-age season for the Tigers last year.

“It’s (State Academy) been a great experience especially seeing as last year I didn’t get the opportunity to play, and I missed out on the first round in Adelaide due to a concussion so I was very excited to come over to Melbourne and play a few games,” Franklin said.

“I feel like especially since I only started back in 2018, it’s been very rushed and the journey from community footy to now playing footy and League and state footy, it’s crazy. “The intensity and the girls just in general, it’s a completely different ball game.”

Whilst Franklin said she did prefer playing as a leading forward, she was “more than happy” to play as a defender if the team needed her, knowing the knowledge of playing at both ends could only further help her development. Speaking of her development, the athletic Franklin who has a turn of speed very few her size do, is confident in her ability to clunk grabs.

“I feel like being a tall forward, I feel like it’s a strength for me to have an overhead mark and I think that’s something that I’m very confident in,” she said.

In terms of her improvements, Franklin is looking to work on her ground balls and having more of an impact once the ball hits the deck. Whilst the ultimate goal is to reach the elite level, Franklin said she hoped to play the best football she could at whatever level that might be, wanting to emulate the rise of another talented player who had come from her club.

“I’d like to say Bianca Webb (is an inspiration) because we both started at Ocean Ridge back at 2018 and I’ve just been trying to follow in her footsteps over the past couple of years and she’s just been doing amazing and one day I hope to be like her,” Franklin said.

“I guess (the goal) it’s just to be the best footy that I can play. “It would be great to get drafted, but at the moment I’m really happy with what I’m doing.”