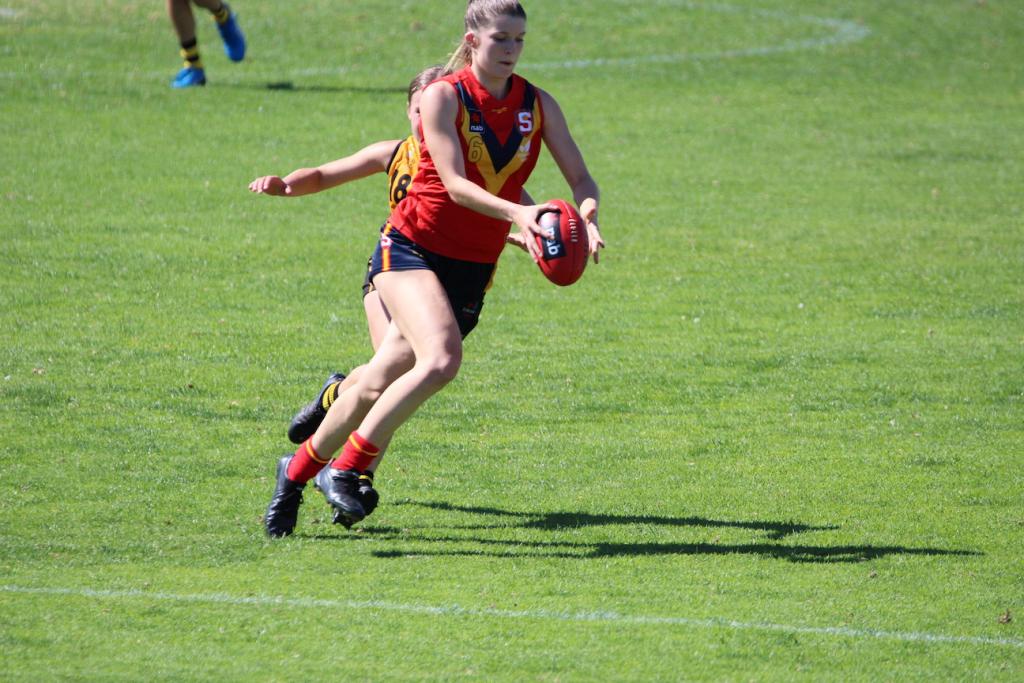 GYPSY Schirmer‘s junior football career has almost gone full circle at South Adelaide. Coming in as a young player a few years ago, Schirmer looked up to the Panthers’ abundance of AFL Women’s talent that led her side to back-to-back flags, and now the draft-eligible teenager has been one of the leaders for the next generation coming through.

“It’s been really positive experience actually,” Schirmer said. “Coming into a club that was so established as South coming off two premierships, it’s always going to be a bit nerve-wracking as a new player because you’ve got some amazing AFLW talent that is in that squad, but so many of the girls just took me under their wing and really gave me the confidence to develop my own game and develop my own style of footy, so along with the coaching staff it’s been a really, really positive experience.

“[Of the 2021 team] It’s been interesting, it’s definitely given me the confidence to take on a leadership role within that team. “Obviously knowing what it feels like to be a young player it’s been really important we bring them in as well as we can and bring them under our wing.”

The midfielder/forward has had quite the journey since taking up the sport, and rising through the pathway to represent her state at the AFL Women’s Under 19 Championships and be included amongst the AFL Women’s Academy’s prestigious group.

“I’ve been playing football for five years now I think,” Schirmer said. “My first kind of experience was through school football, we just had like a very casual nine-a-side program that they needed numbers for and I just filled in at a lot of different sports before. “I wasn’t really thinking it would turn into anything but from there I kind of just fell in love and then my local club that my dad and brother had been coaching and playing at for quite a while started an Under 16s program and started getting into that and it just evolved from there really. “A lot of my other sports dropped off and that stuck and so I’m here now.”

Schirmer said representing South Australia had been a dream, and while the COVID-19 pandemic had put a stop to the national championships last year, the South Adelaide teenager was just excited to be travelling and playing alongside players her age.

“It’s actually been awesome,” she said. “This is my first time travelling with a SANFL State Academy. “I played Under 15s in the schools team in 2018 so as a SANFL program this is the first time, so it’s been a really awesome first experience. “Especially travelling, as much as it’s not the Gold Coast it’s still been amazing to kind of get out and the girls are amazing and just gelling with people your own age, I found really, really valuable.”

In 2021, Schirmer has transitioned from being a more permanent forward to a wing role where she can rest forward and still have an impact inside 50. She described the transition as “pretty smooth” and said the roles were similar, with the midfield role requiring even more focus and running.

“The role I was actually playing in the forward line was definitely that high forward, so lots of running up the ground to then turnaround and weave back and kind of that link up between the defensive line and our mids to the forwards,” Schirmer said. “That wing position is played very similarly, so I felt I’ve been able to smoothly transition quite nicely. “Definitely it’s a bit more intense, more of a midfield role, but I think I’ve quite enjoyed it so far and looking forward to the challenges to come with it.”

While some might get ahead of themselves being included in the AFL Women’s Academy, Schirmer said while the experience was “really special”, and she was not expecting the call-up last year, the inclusion had helped her confidence and leadership more than anything else.

“It’s been really encouraging and given me that little bit of extra confidence to go into my clubland and really embrace my leadership qualities and just play football to my strengths,” she said. “I think it’s really easy to get in your head when you get those kind of opportunities, but if anything it’s given me the confidence to do my best thing on the field because I’m there for a reason.”

Schirmer described her breakaway pace and contested work as her strengths, being able to win the ball in traffic and use her athletic gifts to burn off opponents and wheel out of a stoppage to get the ball to teammates. As for her improvements, Schirmer said it was just about getting the fundamentals right.

“The best footballers you see in the higher levels just do the basics really, really well so I think just for my own game, just to kind of developing my around the ground awareness but also trying to develop a bit of versatility as well,” she said. “Getting used to playing up forward, playing down back, playing in the mids, having it all covered so I get chucked into whatever program’s next, I can just kind of adapt to any situation I’m in.”

Having come so far in the pathway, Schirmer said her father was her greatest inspiration, and the reason she was playing football, having been really supportive through all the sports she had tried as a child.

“He was very persistent for me for the majority of my juniors in different sport, just with my pace and natural skills,” she said. “He was really very encouraging and wanted to get me in, and then coached me for two years when I was playing club football and really drove my career. “He’s definitely my number one supporter, but also definitely an inspiration for why I’m here.”

Now with the AFL Women’s Draft approaching in a couple of months, Schirmer is keeping a level-head, but is eyeing off completing her ultimate goal.

“I think main goal this year being draft-eligible is to make the AFLW,” Schirmer said. “Kind of very open to any possibilities that come my way but I just want to be the best footballer I can be, so wherever that takes me I’ll be forever grateful.”