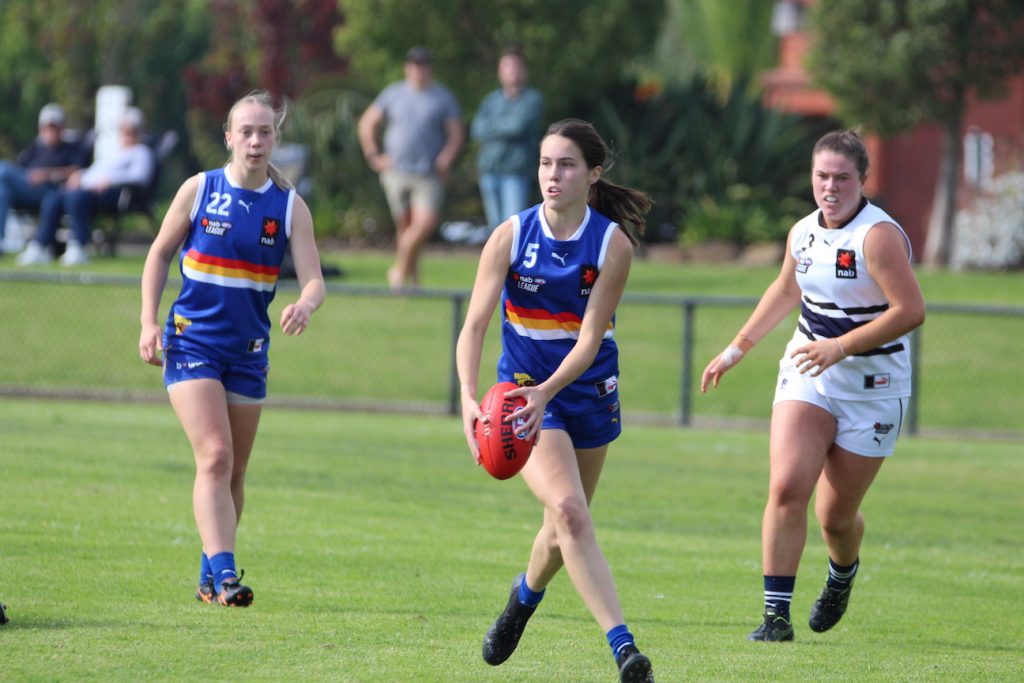 NEXT up in our NAB League Girls team review series are the Eastern Ranges, a team which managed to extract the best from a deep and diverse core of draft eligible prospects, while also blooding exciting talent for the future. We recap the Ranges’ season, and take a look at some of the top performers across those various age groups.

The Ranges made a winning start to 2021, looking one of the form sides of the competition with strong wins in their first two outings. But after romping to a 114-point victory over Gippsland, Eastern was handed its first loss of the campaign to Geelong, before being pipped by Northern in what was a classic comeback. That Northern loss only seemed to spur the Ranges, as they went on to rack up two wins within the same week, and rounded out the regular season with a couple more. They would exact revenge against the Knights in the elimination final, before falling to Oakleigh one week short of the grand final.

A real bolter in this year’s crop, Campbell quickly established herself as one of the premier talls of the competition with her dominant work for Eastern in the ruck. The 182cm prospect is as athletic as they come, able to thrive aerially but also compete at ground level and confidently run the ball forward. She doubled as an attacking threat and played a significant amount there for Vic Metro, gaining a tick for her versatility with impactful passages of play and great attack on the ball.

Deed was not only one of Eastern’s most consistent performers, but one of the most reliable midfielders competition-wide in 2021. Her feats seemed to go under the radar each week, but the 18-year-old’s ball winning strength was important for her side. She collected over 20 disposals in six of 10 NAB League outings, proving a constant at the coalface before being tried in a few different roles among the Vic Metro setup.

Another of Eastern’s Vic Metro Under 19 representatives, Sherar quickly stamped herself as one to monitor with eye-catching moments in midfield. While she did not accumulate over 20 possessions in any game this season, Sherar also did not drop below 10 as a permanent fixture in the Ranges’ engine room. Her burst from congestion and ability to set Eastern on the front foot was great to watch, but she was another to be squeezed out of a very strong Metro midfield.

A very promising talent for next year, Busch took out Eastern’s best and fairest award in 2021 ahead of very strong draft eligible teammates. While she had a couple of quiet outings, the 17-year-old proved difficult to stop once she was on, providing relentless rebound and sound intercept ability across half-back. She finished the season on fire with averages of 23.5 disposals and five marks across her two finals appearances, while giving a glimpse into the future with some added midfield minutes.

A bright future lies ahead for Pisano, who at just 15-years-old topped the NAB League goalkicking charts in 2021 with 19 majors. The classy left-footer was held goalless just once this season, while finding the big sticks multiple times in six of her 10 outings. She proved a game-winning type, able to burn opponents with a great turn of speed and find a way to impact the scoreboard with innate finishing ability. She represented Vic Metro at Under 17 level and was easily up to the level already.

Walsh is a developing tall who, like her fellow under-agers, has already taken up a key role in the Eastern Ranges side. At her best, the 17-year-old was able to shut down dangerous opposition forwards one-on-one, while providing aerial assistance down back and getting her team going on the rebound. Walsh played all 10 games in 2021, which should put her in good stead for more of the same next year.

The Ranges have a bunch of players who also went on to crack VFLW level, with standout top-ager Olivia Meagher (Collingwood) among them. Smooth moving leader El Chaston and fellow 2002-birth Jess Grace showed enough form to be selected for Hawthorn, along with 2003-born talents Ruby O’Dwyer, Tilly Hardy, and Isabelle Khoury. All proved pillars in the Ranges side, as did Vic Metro squad members Jorja Livingstone and Cadhla Schmidli. Georgia Wilson finished second in the goalkicking ranks to Pisano, as the likes of Scarlett Potter, Ava Campbell, and Laura Stone proved they were ones to watch for the future.